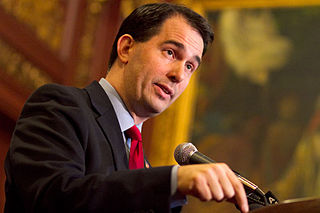 Darwin Day arrived today. That could explain why a London reporter wanted to ask a likely candidate in the 2016 presidential election where he came down on creation v. evolution. The candidate, Governor Scott Walker (R-Wisc.), chose not to answer. That question, and Scott Walker’s choice, speaks volumes about society today. 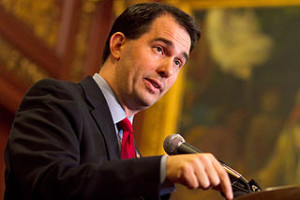 Yesterday (February 11), Scott Walker gave a speech at London’s Chatham House, as part of a trade mission to the United Kingdom. Afterwards came a question-and-answer session. One reporter wanted to know how Gov. Walker would make certain foreign-policy decisions. The governor declined to comment on foreign policy when not on American soil. That might reflect a perhaps-obsolete American political tradition: political differences stop at the water’s edge.

The reporter than asked whether Scott Walker believed in evolution. And he said:

For me, I am going to punt on that one as well. That’s a question politicians shouldn’t be involved in one way or another. I am going to leave that up to you. I’m here to talk about trade, not to pontificate about evolution.

Matea Gold of The Washington Post filed the first report. She described the “incredulity of Justin Webb of BBC Radio 4, who served as moderator at Walker’s sole public appearance in the four-day trip.” Maybe the “incredulity” she described was her own, not Webb’s. She and a Post colleague filed another report later that evening and said much the same. So did Scott Bauer of the Associated Press.

Both science & my faith dictate my belief that we are created by God. I believe faith & science are compatible, & go hand in hand.

The hits came almost at once. James Taranto quotes the funniest, from Ron Fournier of National Journal. “Weasel!” he thundered in his headline. And:

1. How does a serious person duck evolution?

2. Why do these guys keeping going to London? http://t.co/jeJzEDL9bs

What does it mean?

First, as Taranto points out, talk of “believing in” a scientific law or theory doesn’t sound scientific. Scientific laws describe the world. Scientific theories explain it. But any scientist knows one does not blindly trust any explanation. One constantly tests it. Scientists live to discover something that forces other scientists to look again at their theories, and maybe change them, or throw them out!

Not so with evolution. Most scientists treat evolution as an article of faith. And they fail completely to see the irony.

And laypeople, like Ron Fournier, accept evolution because someone wearing a white smock tells them to. These scientists have made themselves priests (or anti-priests) of our modern age.

But Fournier shows the real problem:

A president’s view on evolution would influence his or her position on climate change, precision science, stem cell research and scores of other issues connected to one of the most fundamental findings of the modern age.

One can guess how Ron Fournier relates evolution to these other concepts. All one need do is read his other work.

On evolution and climate change: the world got along just fine without that smelly, sooty, carbon-intensive heavy industry and independent transport.

On stem cell research: that baby you’re carrying has no more value as a human being than a bunch of cells. It would serve society much better if we take it apart and turn its stem cells into tumors to “cure” diseases. Let us relieve you of the inconvenience! (Never mind that adult, not embryonic, stem cells can do much better to heal what ails people.)

But on precision science, Ron Fournier fails. Why? Simple. Life needed far more precision than even the most “precise” machine shop can do, even to begin. But the Grand Paradigm of Evolution tells us life came out of a thrown-together soup! So Ron Fournier contradicts himself!

Gary DeMar at Godfather Politics suggests how Scott Walker might have answered that reporter.

[F]irst, my views on evolution won’t pick your pocket. My view on evolution won’t use the government to oppress you, tax the productivity out of you, regulate your business to hopeless levels, force you into a government-run insurance scam, run up the deficit, and use Executive Orders to bypass the Constitution and Congress.

DeMar goes on. Scott Walker might next have asked how anyone knows abiogenesis (life from non-life) ever happened. Especially since no one has ever seen it happen in the wild today.

He could also ask whether the reporter’s smartphone built itself, and whether its operating system, be it iOS or Android or Windows for Smartphones, wrote itself.

And he might have closed by asking where morals come from. “Without God, everything is permissible,” said Fyodor Dostoyevsky. More recently (twenty years ago), Richard Dawkins wrote:

In the universe of blind physical forces and genetic replication, some people are going to get hurt, and other people are going to get lucky; and you won’t find any rhyme or reason to it, nor any justice. The universe we observe has precisely the properties we should expect if there is at the bottom, no design, no purpose, no evil and no good. Nothing but blind pitiless indifference. DNA neither knows nor cares. DNA just is, and we dance to its music.

In fact, Scott Walker does not have to answer whether he “believes in evolution.” Let Ron Fournier and that reporter ask one of those besmocked modern anti-priests why anyone should believe in evolution. This goes further than “what’s in evolution for modern humankind.” Scientists insist evolution has a factual basis. Where is it?

But they won’t. Even to ask a question like that, takes alimentary, and gonadal, fortitude. (One of the white-smocks might say it takes bilious fortitude, actually.) Besides, the Ron Fourniers of this world do get something out of evolution: an excuse to pick our pockets while getting away with – but no, that would be Not Safe For Work. Don’t take my word for it. Read the words of the late Julian Huxley.

But what are we to think when pity for suffering individuals leads us not only to preserve them, but to allow them to reproduce and so not only to lower the quality of the race, but to produce more suffering in individuals yet unborn? What is one to think of the misplaced kindness which, to give an actual recent case, takes an epileptic woman to hospital to be operated on to remedy sterility; or the sentimentality which rejoices at the “happiness”, so called, generated by the marriage of two deaf mutes?

Who, now, shows greater charity? Scott Walker, who gives at least a nod to creation? Or Ron Fournier, who blindly champions evolution without a thought to what it really means?

Related Topics:creationevidenceevolutionmediamoralitypoliticiansscientific theory
Up Next

AiG to sue Kentucky for renege