Why does Hillary Clinton face a scandal she cannot suppress? Did Barack Obama, or Valerie Jarrett, or some other senior Administration official, decide to destroy Hillary Clinton? Whom does Senator Elizabeth Warren (D-Mass.) have to thank for all this? Few commentators seem to want to know, or care. But the mainstream media did not have a sudden attack of conscience or embarrassment. Someone ordered a hatchet job on Hillary Clinton. She laid herself wide-open to that, to be sure. But by now the scandal should have faded. It hasn’t.

Michael S. Schmidt, writing in and for The New York Times, started all the trouble. According to his report, Hillary Clinton, while Secretary of State, used a personal, private e-mail account for all her correspondence. Never once did she have an e-mail account in a government domain!

A few defenders did come out, at SodaHead.com and other sites. They pointed out: though the law forbids such behavior today, it did not so forbid then. So no one can prosecute Hillary Clinton for this lapse alone. The Constitution does forbid bills of attainder and, more to the point, ex post facto laws. But again: Mr. Schmidt first accused Hillary Clinton of lawbreaking. Not some conservative writer or commentator. Michael S. Schmidt at The New York Times.

CNAV at the time (a) anticipated Prime Minister Benjamin Netanyahu’s address to a joint session of Congress, and (b) waited for Arthur Ochs “Pinch” Sulzberger, Jr., publisher of the Times, to fire Schmidt and retract or “clarify” the piece. Sulzberger did none of these things. 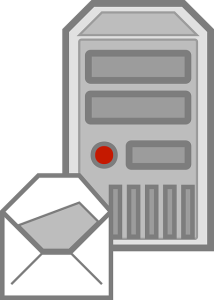 A stylized drawing of an e-mail server. Graphic courtesy Pixabay.com

Instead, the nation learned more, all to the disgrace of Hillary Clinton. For she did not merely keep a personal account at Google mail, or Yahoo! Mail, or HotMail, or Microsoft Network, or even her regular Internet Service Provider (ISP). She asked someone, probably a long-time aide, to set up a private e-mail server in her home in Chappaqua, New York. She even registered a new domain: “clintonemail.com.” (The domain registry lists an “Eric Hotenham” as the customer of record. The Washington Free Beacon thinks this could be Eric Hothem, once a special assistant to Hillary Clinton during the Bill Clinton years. Eric Hothem has helped the Clintons with a number of technical evasions and shady deals.

In setting up that private server, Hillary Clinton kept the government’s own records in her own personal custody. Worse yet, she could destroy them at will. She alone controlled their backup. So when she wanted an e-mail to disappear, she could make it disappear. In so doing, she might indeed have committed a felony. Worse yet: she granted e-mail accounts to at least two top aides at State, and several other close associates.

And now the Associated Press has sued Hillary Clinton, under the Freedom of Information Act, to get copies of these e-mails. This morning they quote a source in the Obama administration. That source tells the AP: Obama’s counsel did not know Hillary Clinton did all her e-mail correspondence using this private, custom e-mail domain and not the state.gov domain.

Yesterday Rep. Trey Gowdy (R-S.C.), chairman of the House Select Committee on Benghazi, sent Hillary Clinton a subpoena for the e-mails. Last night (11:30 p.m. EST), Mrs. Clinton “tweeted” she wants the State Department “to release my e-mails.” This although they still sit on her private server!

What this activity really means

In all this, Hillary Clinton has few defenders. And that should surprise everyone. One expects Jehmu Greene, ever “ready for Clinton,” to defend Hillary Clinton and point out “everybody did it.” (As she did this morning on Fox and Friends.) But one also would expect David Axelrod to say the same. He did not! Instead he said the longer Hillary Clinton lets this scandal “fester,” the worse for her.

The Obama administration barely wants to talk about it. They give specious reasons to explain her behavior and the controversy. Senator Dianne Feinstein (D-Calif.) doesn’t seem to know what to think.

Newsmax.com seems to think this scandal caught Democrats off guard. But why should any of this catch them off guard? Who revealed to the world that Hillary Clinton never used an email address at state.gov or other government domain? The New York Times did. Why does Hillary Clinton have so few defenders?

To make the scandal worse, Hillary Clinton raised Cain about Republican government officials occasionally using their private e-mail accounts, typically on free-of-charge e-mail services, for government business. She even said they were shredding the Constitution when they did this. She said such behavior “stunned” her. In short, she threw off on her political and ideological opponents. She accused them of sins, and maybe crimes, she herself would later commit.

Still, one would expect the mainstream media to leap to her defense. All liberals keep a double standard of behavior. One learns early to expect no better from them. For offenses that force Republicans to resign, and often to plead guilty and go to prison, Democrats and liberals suffer no penalty.

So one must ask: why has Hillary Clinton run out of friends? Why did Michael Schmidt write the story? Why didn’t his editor “spike” it? How could we find out so quickly (within forty-eight hours!) that Hillary Clinton had someone build an e-mail server, all her own? David Axelrod normally can and does excuse anything a liberal does. Why will he not excuse this?

For answer, one must first ask: who benefits from Hillary Clinton losing the nomination race, or even getting out of the race?

An obvious name suggests itself: Elizabeth Warren. She, and only she, has a shot at taking the Democratic Presidential nomination away from Clinton. But why should she suddenly have so many friends?

Have a look at Elizabeth Warren. Contrast her with Hillary Clinton. Clinton favors cronies and sometimes asks those same cronies to make lots of money for her personally. But Warren believes the government should hold everything in common.

So says Senator Warren. Note carefully: she says the factory owner benefited from government roads, schools, and police forces. As if private schools do not exist. Furthermore, she forgets (as do most of us, most of the time) that private highways once existed. One of them: the Massachusetts Turnpike in the very State that sends her to the Senate! (The police perform one of the three core functions of government: to keep law and order. But the police commonly manage force in retaliation, not in immediate defense.)

But even before saying that, Elizabeth Warren said no one ever gets rich on his own. False. And anyone who says such a thing, typically seeks to legitimize highway robbery. Understand this: a thief is an unauthorized wealth-redistribution agent.

This makes Elizabeth Warren eminently attractive to a Barack Obama seeking someone to carry his torch. After all, he once decried the Constitution as “a charter of negative liberties.”

Why else would the Obama administration, and the de facto Department of Information the mainstream media have become, turn on Hillary Clinton? Maybe because Obama and Clinton hate each other. And have hated each other at least since they ran against each other in 2008. And maybe, again, because the Democrats always have wanted to nominate a genuine socialist and communist, not a State capitalist/cronyist, for President.

Former South Carolina Democratic Chairman Dick Harpootlian already wants the Democratic Party to nominate someone else. “There’s always another shoe to drop with Hillary!” he laments. Sure he does. As if he didn’t know it already. As if he hasn’t always known it. And that goes for all the liberals now turning on Hillary Clinton.