This past week Governor Christie took an important executive action which appeared to defend the Second Amendment.  Whether or not it did, it was the right humanitarian thing to do. But it might be a cautious move on the part of conservatives to place a bit of skepticism on his motives as they consider also his slowly sinking campaign.  What was, just a few short missteps ago, supposed to be a luxury cruise to the White House, is a vessel more likened to the sea worthiness of a 58 Chevy making it’s way from Cuba to Miami.

What is being referenced here is his Executive Pardon of Shaneen Allen.  The poor unfortunate soul ensnared in the web of illegal and unconstitutional laws here in the great Garden State.  Two things need to be iterated here.  First, anyone with a heart and soul should thank the Governor. Second, Governor, what the heck took so long?

In case some reading this may not be aware, Ms. Allen entered the land of Liberty and Prosperity from Pennsylvania in possession of her legally owned firearm. This poor woman, a struggling mother of two children was arrested, incarcerated for days, threatened by Overlord Prosecutors who demanded she accept 3 years in prison.  All the while she was prevented from seeing her children and subsequently fired from her job.  Talk about Liberty and Prosperity! Her life’s destruction has been going on now for many months.   So why pardon her now?

More needs to be said about this pardon and it will be. Read on.

Curious too, that this pardon comes just days after a Town Hall meeting up in Whippany during which the good Governor lamented how he could prevent some of the outrageous firearms laws the people of New Jersey are forced to endure.  All he needs, he so solemnly related, is a Republican legislature.  Not the one he has to deal with.

A legislature by the way, that not just Democrats and previous liberal Republicans helped to create and maintain, but Governor Christie himself has aided and abetted much of it.  New Jersey has been a beacon for illegals as its “sanctuary state status” has lured in Democratic voters, most of whom arrive illegally and vote illegally. Combine this with New Jersey being the most highly taxed state in the country  with the most easily obtained handouts which has forced flight of the productive while attracting Democratic voters like piranha to bloody flesh.

You see people, he is helpless to help us, even though he really does want to, because he has to deal with a leftist legislature.  But he is not helpless. But in order to maintain illegal laws which he apparently approves of, he needs you to believe he can’t do anything about them.

A man of his background surely is not ignorant of the power of the Chief Executive in New Jersey. Clearly by his statement in Whippany his hope is that the people are the ignorant ones.  But then again, as we revisit the Hurricane Sandy legacy, it may be possible that all that beach time with the world’s leading liar and manipulator of truth could have metastasized  into the governor’s DNA.

Be that as it may or may not be, here are some hard facts.

The Governor of New Jersey has the most wide ranging executive set of powers of any of the 50 states. (Or is that 57?)  Unlike the usurper in the White House the Governor of New Jersey can legally write law.  He can legally change laws and he can legally void laws.  The SAPPA Group has on several occasions contacted the Governor via registered mail and requested that he take Executive Action on one of the most unconstitutional laws in the nation.  They asked him to remove by Executive Order the phrase “justifiable need” relating to a person’s civil right to carry a handgun. Those requests were not actually denied, because they were completely ignored.

Mr. Christie does not need a Republican legislature to write an executive order.  He knows he doesn’t and now those reading this do too.  So let’s take this Executive Order power through the final steps.  Let us suppose Governor Christie was  serious about support of the Bill of Rights.  Here is how he could fix New Jersey’s illegal gun laws.

That is what a sitting NJ Governor could do.  But what has ours done?

The saga of Judge Joe Oxley

Well he has appointed and reappointed liberal judges and justices who have and will continue to support illegal legislation.  He has hired an Attorney General who has persistently denied  NJ citizens their right to self protection.  He has appointed a long time liberal Republican to a judgeship in Monmouth County, one Mr. Joe Oxley.  Oxley has made it quite clear during his short tenure that there is no difference between him and those Democrats he has publicly called foes.

In the short time Mr. Oxley has been dressed in black robes he has denied 99% of carry permit requests.  Those approved were for cronies and elitists, those whom, as anyone understanding the truism of the left, are as equal as the regular folks, but just a bit more equal.  Joe has denied carry permits to retired police officers with many decades of service and experience.  In the Second Amendment supporting community he has dubbed him “Say No Joe”.  Let’s be clear here.  The Constitution does not give appointed judges or legislators the authority to place arbitrary conditions on the citizen’s civil rights.  In fact, it forbids it. 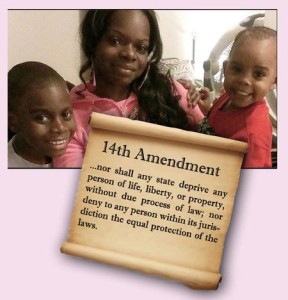 Returning now to Ms. Shaneen Allen.  While it’s difficult not to applaud her being pardoned, unfortunately it was, in the entire scheme of things, unconstitutional.  It violates the 14th Amendment which guarantees the equal application of laws to all citizens.  Not just the elite and not just for those people who could be used as a political pawn by those endeavoring to show both compassion and conservatism, but all the people must be treated equally and the laws must be applied consistently.

Because it has been made very difficult and time consuming by the bureaucracy here in NJ to get criminal records and also the SAPPA Group’s desire to protect the privacy issues of so many illegally prosecuted citizens, it has been very difficult to get an accurate count of persons who are as entitled to pardons as was Shaneen.   We have the names of many of those “persecuted individuals” but will not list them here. There may be as many as 1000 people, during just the past 7 years, who are in jail, on probation and have lost their constitutional right to vote because they now carry a felony conviction for violating a minor gun law.  We are not speaking of crimes being committed with firearms, we are talking about law abiding citizens who broke, unknowingly or accidentally one of the hundreds of ridiculous and unconstitutional gun laws which were not associated with other criminal violations.

So Governor, want to really prove you are a Constitutional Conservative?  Get out your pen and your phone, reminiscent of your beach buddy, and author up that Executive Order and then call your judges and remind them they don’t have the authority under the Constitution to deny the citizens of New Jersey their rights.  While you’re at it, call those leftists in the Senate and the Assembly and tell them the same thing.