At this very special time of year, it is more than appropriate to meditate on the meanings of God’s sacrificial lambs.

A number of years ago I worked in a small office that was owned and operated by a wonderful Jewish man. At Easter time he commented that it was a very interesting coincidence that both Passover and Easter fell around the same time every year. Of course I immediately took the opportunity to explain to him that this didn’t happen by coincidence, and I proceeded to tell him how it was a Roman custom to set a prisoner free during the Passover season. In this case, Pilate, who was looking for a way out of getting involved in the Jewish problems, had offered the Jews the choice to free either Jesus or the notorious thief Barabbas. They chose to free Barabbas and began shouting to crucify Jesus. This upset my friend and in a horrified response said, “You mean it’s true? We did kill Jesus?” Hopefully, I managed to adequately explain that no one could take Jesus’ life from him. He willing gave his life as a sacrifice for our sins – that the Bible says that He was the lamb that was slain before the foundation of the world. John the Baptist recognized this when he first saw Christ approaching him to be baptized. John said: “Behold! The Lamb of God who takes away the sins of the world.” John 1:29 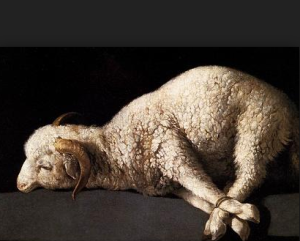 The Bible records the first instances of sacrifices being made by Adam and Eve’s sons after Adam and Eve were cast out of the Garden of Eden for their sin. In this account the significance of the acceptance or rejection of the sacrifice pertained to God’s acceptance or rejection of the person making the sacrifice. This custom continued throughout the Bible, with Abraham conducting a notable and often over-looked event.

In Genesis 22, God commands Abraham to sacrifice his beloved son, Isaac, as a burnt offering. The significance of a burnt offering was that it was continual. We know from the Scriptures that Abraham was obedient, believing that God would provide a sacrifice to replace Isaac, which He did in a rather dramatic way. As Abraham was about to slay his son, God stopped him and provided a ram that was caught in a thicket. If you are wondering why it was a ram and not a lamb, you should know that in ancient times a ram was a male lamb that was set apart – just as Abraham’s ram was set apart from its flock by getting caught in a thicket. In this instance, the symbolism is the most important part of the story. God supplied the sacrifice for all of our sins in the form of His son, Jesus.

There is more worth considering – and it concerns the Passover. The Book of Exodus is the historical account of how the enslaved children of Israel were set free by Pharaoh through the efforts of Moses, who was empowered by God – but not until the 10th plague ran its course. In this horrific plague, the first born of all the inhabitants of Egypt die – except for the households that had a strange mark over their doorways: the blood of a lamb. This, however, was not to be any lamb. It was to be a male lamb without any blemish. Instructions were given by God to accommodate households that were not able to afford such a lamb, and these were continued in the Book of Leviticus concerning the sacrificial requirements. (See Lev. 5:7, 12:8, 14:22 & 30) Once again, the details are important, but not quite as important as the symbolism. This plague established the Hebrew feast of Passover, which the people were told to commemorate the day that death “passed over” them. To put this in spiritual as well as symbolic terms: death “passed over” those who were covered by the blood of the lamb.

In the Book of Leviticus, chapters 16 and 17, God gives instructions to Aaron through Moses on how to institute the Day of Atonement, as a way for the children of Israel to “atone” for their sins. These included instructions for two sacrifices: one for sin and the other to be a burnt offering: which once again represented a continuous offering. Verse 17:11 states: “For the life of the flesh is in the blood, and I have given it to you upon the altar to make atonement for your soul; for it is the blood that makes atonement for the soul.”

All throughout the Old Testament, God established symbolism to help us understand the enormity of what Christ did when He shed His blood for us. Today, thousands of years after death passed over the Israelites who were protected by the blood of the lamb, eternal death passes over us who are covered by the blood of God’s sacrificial lamb. John the Baptist understood this when he first laid his eyes upon Jesus. Those who see Him through the eyes of faith today still recognize Him as God’s eternal burnt offering that continues to save us from our never-ending cycle of sin. By His stripes we are healed and through His blood we are saved. May the blood of Jesus cover you and yours on these very important days when we commemorate His sacrifice.