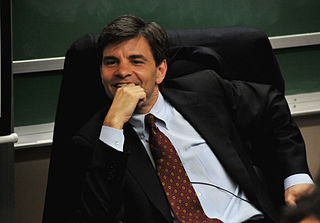 George Stephanopoulos does not work as an objective journalist. Every thing he does, he does on order or to curry political favor. Merriam-Webster has a word for one who so behaves: hack. But why should George Stephanopoulos and his acts surprise anyone? The American Broadcasting Corporation News division (ABC News) knew how George Stephanopoulos would write when they hired him in 1997. In fact, ABC News counted on him writing to favor leftist politicians. They wanted him to play the hack. Because they have long filled their division with hacks. As have all Mainstream Media organs.

What moves a hack?

Before we go further, let us make clear how to define a hack. Merriam-Webster defines a hack strictly in terms of commercial success. A hack, they say, writes to make easy money. He has no profound or momentous message. He writes for the masses, so the masses will “eat up” what he writes. Merriam-Webster would no doubt call William Shakespeare a hack.

Similarly, most Mainstream Media writers, no doubt including George Stephanopoulos, call any conservative writer, speaker, or host (like Rush Limbaugh) a hack. They have a problem doing that, of course. A classic hack, they say, writes to make lots of money. See, then, what they admit: no one can make money by writing leftist views. Ask Al Gore. (He had to sell his Current TV network to the Qatari media combine, Al-Jazeera.) 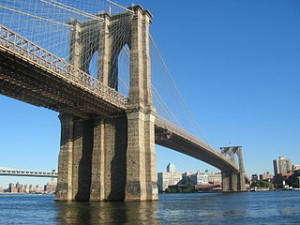 The Brooklyn Bridge, the most sold bridge in the world. Photo: Simone Roda, CC BY 2.0 Generic License

George Stephanopoulos writes for the masses, too. But if he wants material success, he seeks to get it by indirect means. So he writes to gain favor with leftist politicians. They then will grant him exclusive interviews. Interviews mean exposure, exposure means ratings, ratings mean advertising sales, and ad sales mean money.

But recall how else Merriam-Webster defines a hack. A hack writes on order. Someone orders him to write a certain way. Next one must ask: whose orders does a hack take? George Stephanopoulos evidently prefers to take orders from the most imperious (that is, order-giving) announced Presidential candidate to date: former Senator (and later Secretary of State) Hillary Rodham Clinton (D-N.Y.) And to do this, George Stephanopoulos did more than write good copy for Mrs. Clinton. He went further than most hacks dare or even can afford. He gave $75,000, by all accounts out of his own pocket, to The Clinton Foundation. He says he didn’t even tell his bosses. (If anyone reading this believes that, CNAV has a partnership share in a bridge spanning the East River, which we would like to offer for sale.)

Then, George Stephanopoulos came a cropper. Or perhaps we should say, he took one for the team. Peter Schweizer wrote a book he titled Clinton Cash. In it Schweitzer laid out evidence that demands that some law-enforcement agency, maybe the FBI, investigate. Evidence suggesting bribery and swaying of government policy, with incongruous gifts to the Clinton Foundation and oversized honoraria for President Clinton. (Though SecState Clinton probably reneged on one bribe: the Keystone XL Pipeline.) George Stephanopoulos, hatchet in hand, hacked away at Schweizer. He called Schweizer a political hack. The problem: someone revealed the gifts George Stephanopoulos gave over the last three years. So he “apologized.” He said he expected his gifts would show up on record. (They wouldn’t! Read IRS Form 990 for yourselves. Nowhere does it ask for gifts by name of giver. It asks for program budgets and salaries of ranking officers, but not item-by-item gifts to the exempt organization.) Then he told the American people one way he would punish himself: he won’t moderate the Republican primary debate in New Hampshire. As if the Republican National Committee would sit still for his moderating that event anyway. Especially after what he did to Mitt Romney in 2012. But he will likely “cover” the campaign. And he probably hopes Senator Clinton will become the Second President Clinton. She might not name him White House Press Secretary. But she might create a Department of Information (not Information Technology, but Information as in Propaganda) and name George Stephanopoulos as its Secretary.

George Stephanopoulos no different from the rest

Does George Stephanopoulos really do things differently from others who call themselves journalists? No. Not in any substantive way. True, most political hacks in the media do not shell out $25,000 a year to foundations that serve as political slush funds and personal piggy banks for members of the nomenklatura. As this article shows, other hacks, like Judy Woodruff of PBS News Hour, give distinctly penny-ante sums. But Chairmen of Boards and Chief Executive Officers often give vaster sums, ranging to millions. Gifts that size come from media organs, too. Even conservative media organs, like Newsmax Media, have given to the Clinton Foundation from time to time. (What moves them to do this? Do the Clintons shake them down for baksheesh for interviews?)

Money gifts aside, the Mainstream Media have always written, printed, and produced to order for leftist politicians and administrations. And when rightist Presidents sit in office (Nixon 1968-74, Ford 1974-77, Reagan 1981-89, Bush Senior 1989-93, Bush Junior 2001-09), these same media routinely side with their critics. The only time they take out from this activity, they spend denouncing the alternative media as upstarts, and those who support conservative politicians or causes as “haters.” If this does not constitute a hackneyed approach to the news, CNAV does not know what does.

So CNAV does not count it as any significant victory that George Stephanopoulos will not moderate the Republican primary debate. George Stephanopoulos does what a hack does. But Bob Schieffer ((De)Face the Nation) does no different. Neither does Judy Woodruff. (In fact, though they both play the hack, Judy Woodruff plays the cheap skate! A mere two hundred fifty dollars!) Neither do Rachel Maddow, Jon Stewart, Keith Olbermann, or any of other such hacks, too numerous to name.