Last night, another trove of e-mail messages told the American people what they already knew. Jonathan Gruber, economist at the Massachusetts Institute of Technology, waxed eloquent on “stupid” American voters and an opaque administration and legislative process. The world found out about this in mid-November of last year. Barack Obama told the world Jonathan Gruber had never served on his staff and never played more than an advisory role. That didn’t fool discerning voters then. Now, new e-mail evidence clearly shows Jonathan Gruber played a much larger role than Obama and his apologists let on. 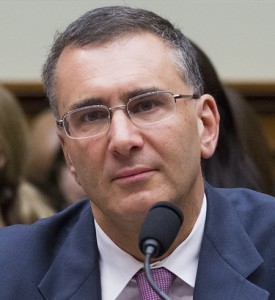 The report came in from The Wall Street Journal. Katie Pavlich at Townhall.com quoted it. Between January of 2009 and March of 2010, Jonathan Gruber sent twenty-thousand pages of e-mails to addresses in the White House and the Department of Health and Human Services. Now the House Oversight Committee has them. Among other people, Jonathan Gruber wrote to Peter Orszag at the Office of Management and Budget, and economic advisers Jason Furman and Ezekiel Emmanuel. This morning, Gary Gross, the Minneapolis Conservative Examiner, quoted Mark Halperin at MSNBC. Mr. Halperin seems to have Republicans who try to get stories to him. They seem to have warned him then that Jonathan Gruber was scamming him. Mr. Halperin seems to have ignored them. But now:

I owe my Republican sources an apology….They kept telling me [Jonathan Gruber] was heavily involved and the White House played it down. They [told the truth].

In fact, this news could not break at a worse time. Jonathan Gruber said the administration, in limiting Obamacare subsidies to states setting up their own exchanges, made no “scrivener’s error” (to quote Judge Andrew P. Napolitano). They wrote the law that way on purpose. They wanted to punish any State governor who refused to set up an exchange. Then, of course, they ordered the IRS to hand out the subsidies to everyone, regardless. Within seven days, the Supreme Court will tell the country whether the administration can legally do that.

Once again, remember the premise of the old Mission: Impossible TV show. An inveterate con artist gets “mission orders” for a mission of a kind only a con artist can bring off. We never know who gives those mission orders. Whoever they are, always leave this interesting disclaimer at the end:

As ever, should you or any member of your [team] be caught or killed, the Secretary will disavow any knowledge of your actions. {This tape will self-destruct in {five|ten} seconds|Please dispose of this tape in the usual manner}. Good luck.

Escaping the world before their eyes

[VIDEO] White House ‘Wasn’t Forthcoming’ on Gruber’s Obamacare Role: Mark Halperin: ‘They were right. The Republicans were right’ | pundit from another planet