The more we Americans began hearing about the possible nuclear pact with the Islamic Republic of Iran, aka “the Iran deal,” and the more President Obama saw that Americans of all faiths and political opinions realized that the pact was not in our best interest, and the more we heard the old anti-Semitic canards from the White House and the media. Things soured for Obama when Israel’s Prime Minister Benjamin Netanyahu cautioned against this arrangement, clarifying that the funding of $150 billion for Iran, with cash assets, sanctions relief, and all strings severed could serve to fund its global terrorism operation and defense. In essence, we would be subsidizing Iran’s undertakings and boost its efforts to eradicate Israel. Obama is also setting the stage to turn U.S. citizens against American Jews, a tactic that Jews have experienced through the centuries.

America could have got a better deal

To simplify, America was in a position to be the victor with an agreement to prevent Iran’s becoming a nuclear power, force it to dismantle much of its nuclear infrastructure, prevent it from enriching uranium, close the Fordo enrichment facility, demand that Iran expose all past nuclear activities, close its Inter-continental Ballistic Missile Program (ICBMs aimed at our continent), allow round-the-clock inspections, and continue sanctions until all conditions were met. 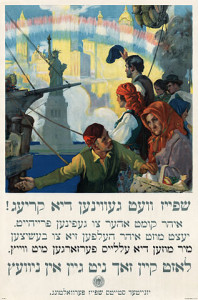 World War I era poster in Yiddish to encourage food conservation. Caption (translated) “Food will win the war – You came here seeking freedom, now you must help to preserve it – Wheat is needed for the allies – waste nothing.” Color lithograph. Art by Charles Edward Chambers, 1917.

Rather, the deal has been called “utterly disastrous.” Kerry agreed to lifting sanctions so that Iran could join the global market and sell oil, all the while increasing our own debt and weakening our own economy by gifting our closet collaborator with $150 billion – he’s bonding with the Islamic entity. By lifting the conventional arms embargo and allowing Iranians to flout the travel ban, Iran could secure more weapons and imperil Israel, “the Little Satan.” It wouldn’t even take much to have their brainwashed, suicidal adults and children detonate themselves in a crowd of Israeli children, shoppers, and general work force.  The contract would also allow the lifting of sanctions over Iranian ICBMs after eight years, thereby providing Iran with the means to target the United States, the “Great Satan,” although ineffective provisos would actually free Iran from obligations far sooner – a matter of months.

Instead of the 24/7 inspection America originally stipulated, Iran gets a 24-days’ notice, during which they may move or conceal their activities. Even now, UN inspectors (not to include Americans and Canadians) may not speak with key scientists and military officers about concealed operations. Submission to these stipulations reveals America’s cooperation in the face of Islamic tyranny.

As more Americans voiced their opposition to the pact, the more often we heard snide statements, such as AP’s references to “the money,” and “the lobbyists,” deviously implying that Jews were the only ones to differ with our US government. One of the oldest lies in the world is again in use, as in the past, to provoke pogroms against Jews by classifying them as unfaithful citizens. We hear nefarious references to the “Jewish lobby,” but never the “Arab lobby,” which brings in the unvetted, possibly jihadist, immigrants, the gradual changes in our schools to install Sharia, the 102 million working-age Americans unemployed, the $818 billion taken from Medicare to fund Obamacare, the refusal to submit a budget to prevent the collapse of Social Security, the blatant disregard for our Constitution, and the growing evidence of treason in the White House.

People of all faiths and convictions weighed in against the pact with the terrorist nation. Christians United for Israel (CUFI) stands firmly against making a deal with an entity whose citizens are hair-trigger ready to re-enact another 9/11 or Benghazi, or any of the numerous attacks on Israeli citizens, with cries of “Death to America” and “Death to Israel.” Our nation’s veterans have come out against the deal as well. In fact, an overwhelming majority of Americans do not want to sign a pact with the Islamic Republic, and our administration is betraying the will of the majority of the people. But armed with pen and phone, the undeterred Obama warned that he would implement the deal regardless of Congress, and that he would make life miserable for those who oppose him.

When non-Jewish democrats, Juan Vargas (CA), Albio Sires (NJ) and Grace Meng (NY), voiced their opposition, Obama could not lash out at an ethnicity. But once the anti-Semitic hate speech was unleashed, an administration’s pro-deal twitter account began using more blatant Jew-hatred attacks, which was soon to be followed by the New York Times, with its roughly half-dozen “Jewish” references and a smear against Senator Chuck Schumer. Obama provoked a bigoted campaign, calling Schumer a traitor, warmonger, and Israeli agent.  Unaccountably, the majority of Jewish voters have blindly and deafly supported Obama in all his problematic demands, and polls show that twice as many Americans, including the Jews, are against the deal, believing it will lead to a more dangerous world.

Yet it is times like these that the President resorts to blatant bigotry and accusations that Jews have dual loyalty, a tactic designed to discourage, silence, and intimidate Jews from acting in their own behalf, lest they be seen as unpatriotic – an efficient, centuries-old technique.  Obama has gone so far as to accuse Israel, and Netanyahu specifically, for meddling in America’s business, although it wasn’t so long ago that Obama meddled in Israel’s elections and threatened to tie Israel’s hands. He is determined to continue his modus operandi, “divide and conquer,” to defy and coerce those who work against his “diplomatic triumph.” This will undoubtedly be extended to demonize the Tea Party, AIPAC and other Jewish groups, and go so far as to vandalize, audit and sue them. The threats have been issued – capitulate or be destroyed.

The word is out: President Obama sent then-Senate Foreign Affairs Committee chairman John Kerry to Iran four years ago, and he promised them the bomb.  The Washington Free Beacon reported, “President Barack Obama approved of Iran’s right to operate a nuclear program in 2011 during secret meetings with Iranian officials, according to new disclosures by Iran’s Supreme Leader.” Khamenei also revealed in a recent speech that talks began in secret with the anti-Semitic, Holocaust-denying former President Mahmoud Ahmadinejad.

It is not the Jews who are unpatriotic.