Talks between Israeli Prime Minister Benjamin Netanyahu, a Jew, and Palestinian Authority leader Mahmoud Abbas, a Muslim Arab, give rise to the subject of “cognitive dissonance.” Avigdor Bonchek provides an excellent summary of the subject in his book Studying the Torah: A Guide to In-Depth Interpretation. Thus:

(1)  “When nations talk with each other, they will not make war with each other.” (This does not apply to the non-nation misnamed the “Palestinians.”

(2)  “When individuals talk with each other, they are less likely to bear grudges against each other.” [This does not apply to Mahmoud Abbas when he talks to Benjamin Netanyahu].

(3)  “There is something about the human psyche that is repelled by the dissonance created when talking with someone we hate.” “Psychologists have a name for it; their term is cognitive dissonance.” This human tendency is lacking in Mahmoud Abbas. 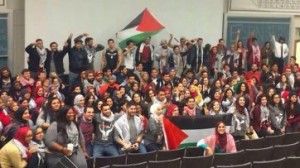 (4)  “When a person’s outer behavior is not in accord with his inner feelings, dissonance and tension are created, and as a consequence, the need to resolve the dissonance and the tension.” This need is not manifested objectively in the behavior of Muslims vis-à-vis Jews.

(5) “Talking draws together, hatred tears apart.” This does not describe the behavior of Muslims steeped in taqiyya (dissembling) who talk to Jews like Netanyahu, who appears anxious to talk to Muslims like Mahmoud Abbas. The asymmetrical attitude of the two sides is obvious.

(6) “If one perforce talks with an enemy with whom he would rather not talk, he is engaged in dissonant behavior – hating someone yet talking with him.” This does not unambiguously describe the attitude of Netanyahu, who feels compelled to talk to Abbas, and whose hatred of Abbas, if it exists, is well concealed – thus resulting in cognitive dissonance.

(7) “The psychological need to act in consonance with our feelings and to feel in line with our actions motivates us to into aligning our feelings with our overt actions. In the case of talking with an enemy, this would be done by having the hatred dispelled; this extricates us from the psychological tension. We now feel (friendly) in concert with the way we act. In sum, talking with our enemy reduces our hatred toward him.” This seems to apply to Netanyahu (to Israel’s grave disadvantage), but most emphatically not to Abbas!

(8) The conclusion is obvious:

Jewish politicians should NOT negotiate with Muslims!