Martin Sherman contends in his op-ed article of the July 18 issue of the Jerusalem Post that “it’s becoming increasingly difficult to accept that the Obama administration conducted negotiations with Iran [regarding nuclear weapons] in good faith.”

This suggests that the Obama administration had ulterior, if not sinister, motives in consummating its nuclear weapons agreement with Iran.

Unfortunately, Sherman does not elaborate on those motives. He knows, however, as does the Obama administration – as does everyone else – that Iran has vowed to wipe Israel off the map.

Since the Iran nuke deal does not stop Iran from developing nuclear weapons, I draw the provocative conclusion that, in his agreement with Iran, Obama was actually giving that Mullocracy the green light to implement its vow to wipe Israel off the map! This helps explain any clauses in the agreement that require the U.S. to come to Iran’s assistance if attacked by Israel – which obviously would require the U.S. to attack the Jewish state!

I believe Israel’s demise has been Obama’s goal ever since he became President of the United States!

Evidence of that motive

In his [first] inaugural address President Obama jettisoned the long-established locution that embodies the generally accepted notion of “the Judeo-Christian tradition.” That tradition, in America, mandates the phrase “Christians and Jews,” with Christians in first place for the good reason that the roots of this country and most of those who founded it are Christian. Obama, however, said on January 20 that “We are a nation of Christians and Muslims,” and then, after a slight pause, “Jews and Hindus,” another slight pause, “and unbelievers.”

Later, in his Al-arabiya interview, he demoted the Jews still further, calling America a country of “Muslims, Christians, Jews.” Obama’s actions (and inactions) with respect to Jewish concerns suggest that this demotion is real and not merely verbal.

Moreover, upon assuming office, Obama appointed to his cabinet Samantha Power, who advocated a U.S. invasion of Israel to establish a Palestinian state in the  the Jewish homeland!

Obama’s hostility toward Israel also appears in his appointment of a transparent opponent of Israel, Chuck Hagel, as his first Secretary of Defense. 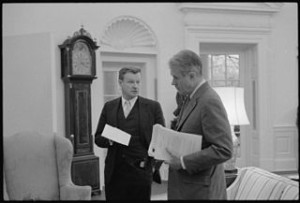 We also see this animus toward Israel manifested in Professor Zbigniew Brzezinski, one of Obama’s first geopolitical advisers.

Like Obama, Brzezinski is a cultural relativist who deplores the nation-state system. The concept of the nation-state is sanctified in the Bible of Israel, and of course Israel exemplifies that concept. Perhaps this is another reason for Brzezinski’s hostility toward the Jewish state. Small wonder that he advocated U.S. recognition of Hamas, an terrorist organization committed to Israel’s destruction.

It should also be borne in mind that Brzezinski was President Jimmy Carter’s National Security Adviser, who facilitated the return of the Ayatollah Khomeini from France to Iran. It was Khomeini who inspired one of the most significant revolutions in history: the revolution that overthrew America’s ally the Shah of Iran, and inaugurated the world-historical uprising of imperial Islam, which now threatens the globe.

This did not disturb Brzezinski. He seems to have regarded imperialistic Islam much as he regarded international communism: a means of eliminating the nation state system!

Under the clueless Jimmy Carter, Brzezinski, like Obama, opposed major U.S. defense expenditures such as the development of the B-1 bomber. It was as if Brzezinski regarded America as the great obstacle to universalism, a vision of Brzezinski that rendered him hostile to Israel’s  particularism.

Therein, I dare say, is the sinister motive of Obama’s nuke deal with Iran. It was not merely to make Iran the hegemonic power in the nation-state fragmented Middle East, but rather to wipe Israel off the map!◙

My critique of the Jerusalem Post pundit who contends that “it’s becoming increasingly difficult to believe that the Obama administration conducted negotiations in good faith” with Iran [regarding nuclear weapons], prompted an analysis by one of my most perceptive readers. She writes (and I quote with her permission):

The recent revelations that Obama has in fact been engaged in backroom negotiations with the Iranians since 2011, confirms even more [my skeptical view of his ‘good faith’].

I suspect [she continues] that America, together with Europe, have been lavishly supporting the Palestinians hoping they will be the proxies that will destroy Israel. After decades of this strategy failing, with the Palestinians only inflicting minimal damage on Israel which has grown in the meantime to become an international powerhouse, Obama decided to change the strategy and negotiate with the Iranians so they will make it their goal to destroy Israel. If I am not mistaken, their calls of Death to Israel have been particularly blatant in the past 2-3 years. They say ‘Death to America’ [as well as] ‘Death to Israel!’ with impunity because they know that Obama will keep backing them as long as they undertake this [lethal] agenda. The Iranians show they don’t fear the US in the least and they say what they want.  This lack of prudence would be surprising and incomprehensible unless they know Obama and the US will let them get away with it.

This analysis elucidates the present writer’s  contention that President Obama, above and beyond his goal to promote Iran’s hegemony in the Middle East, wholeheartedly shares Iran’s commitment to destroy Israel. Indeed, as I have elsewhere shown, collateral evidence of Obama’s sinister commitment actually surfaced in his First Inaugural Address, when he clearly demoted the significance of Judaism vis-à-vis Islam in America’s world outlook.◙