We are witnessing what has shaped up to be a very critical political battle indeed. I have heard for a long time people complaining about not having anyone to step up to the plate and take the reins of leadership against the army of Socialist Progressive Liberal politicians (Republican and Democrat), and biased media moguls who are destroying our way of life in America and shaping it to suit themselves and their own interests. Well, here he is America. Are there things not to like about him? Sure, you may not like his arrogance, his hair, his swagger, his tone, his brashness, insulting remarks or something else about him. However, one must be impressed with his power of conviction and willingness to express it, political correctness be hanged.

Trump will do it 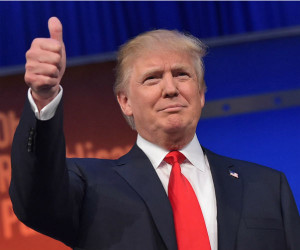 His name is Donald Trump. A strong man, a non-politician who owes nobody anything and promises he will bring America back to strength, world leadership and economic success. A strong man who will stand in the wind against those in positions of political power in America and foreign nations and not back down. A strong man who will challenge China, Japan, Mexico, Russia, North Korea, Iran, Islamic Terrorists and any other country or organization trying to defeat us and let them know it’s time to get off. There are several people in this marvelous field of Republican Candidates who Could do all those things, but it certainly appears Donald Trump is a man who WILL do them.

The path will not be easy for him, but he seems strong enough to endure the meanness and the cunning roadside bombs set in his path by those in politics and media who wish to blow his legs off to destroy him. Ladies and gentlemen, as you are aware, in this country WE CHOOSE our President. Not the so-called mainstream media (ABC, CBS, NBC). They hate Donald Trump. Not the cable news media (CNN, MSNBC, FOX NEWS, CNBC). They also hate him. Not the political establishments (Republican & Democrat Party bosses). They hate him. Not the Political commentators (Chris Mathews, George Will, Karl Rove, Charles Krauthammer, Megyn Kelly, et al.). They hate him. If Donald Trump is to be our next president, it is up to us. He has become the people’s choice. All the aforementioned organizations and various pundits, and others, will destroy him if we allow it. You, the American people, will have the final say in the matter.

Judge Donald Trump by his enemies

Do you wonder why the powerful Socialist Progressive Leftists groups have mounted campaigns against him, even having those who do business with him to stop doing so? Isn’t it strange that even those in the Republican Party Hierarchy are opposed to his very presence in the field, why? It very well may be because he is the only candidate, if elected, who will completely change the corrupt, crony culture of Washington, empty many offices, fire department heads and close some of them down completely. These were precisely the same actions taken by Andrew Jackson. The result was, the Washington politicians and media of that day hated him and the people loved him. And after all, it will be the people who will decide the Republican nominee by way of State primaries, not in a national convention manipulated by the hierarchy.

We’re seeing no discussions from the political pundits on his plans for America. No denial of the truths he’s speaking, just personal attacks, and as in many cases, twisting his words through a politically correct filter. But millions of Americans who don’t involve themselves in the day-to-day world of politics, or who aren’t members of a politically correct class, are hearing the words they themselves think. He is willing to say what he, and they, think and not back down when confronted. Someone said, “He is rapidly becoming a modern day icon with the strength of a John Wayne that Americans look up to.”

Americans have grown tired of always losing. We’re losing our exceptional-ism, losing our world leadership, losing the respect of the rest of the world, losing our sovereignty to the United Nations, losing manufacturing and our jobs to other countries, losing our military strength, losing the battle of people illegally pouring into our country, losing our freedoms guaranteed by the Constitution, the freedom to think and speak our minds, to bear arms, to locally run our own schools so our children may be taught what we want them to learn, to be responsible for ourselves. If all these are not yet lost, they are for certain under attack. I’m sure you can think of others for there are many more.

Can all these things be corrected? Not in one fell swoop, of course not, but they can and must be corrected. Can these things be corrected by being nice and polite? Some of them can but many of them can’t. Teddy Roosevelt, Andrew Jackson, Abraham Lincoln, Harry Truman, Ronald Reagan, and our Founding Fathers all presided over the nations affairs in times that being nice and polite would not have produced the results that were accomplished. We just may be at a place in our nations history that a nice and politically correct person will not take the actions needed to deal effectively with the Socialists inside our country or the evil and destructive (not so nice) leaders of our foreign enemies or the demonic Islamic Terror Organizations. Think about it…..who do you feel WILL, not could, take the necessary actions to effect these sorely needed changes?

Please share this with your friends across the nation.

Thank you for your patience.