You might consider getting your friend a checkup from the neck up if he were to tell you that the new home he had just moved into had a strong lock on the front door but the back door had no lock at all, and that he had just hired two baby sitters to watch his children, but had only vetted one of them, and that he intended to go deep-sea fishing on a party boat knowing only one of two holes in the hull had been repaired, and that prior to the fishing trip he intended to begin chopping up an old concrete sidewalk using a powerful electric chisel while wearing protective goggles that covered just one eye, and that as owner of his business he had decided that the warehouse which held all his stock and tools would be guarded only half the time and never would he have more than one of the two doors locked at any one time. 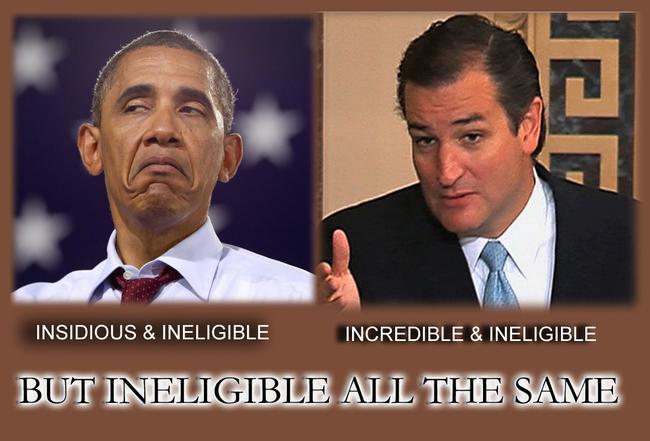 One might read this and say, gee whiz, could there actually be someone that stupid?  Could anyone place his children’s lives in jeopardy, risk having his home invaded, take the chance of drowning at sea, lose an eye to an ejected chunk of concrete or place his business in a position where he could lose everything, by failing to adequately apply basic common sense?

The same people who might ask that question may also want to ask themselves if they think the protection of our country can be done by locking just one door, etc. Would the authors of the Constitution actually allow gaps and openings which could leave our liberty susceptible to danger or destruction?

If that were the case, the letter that John Jay sent to George Washington requesting that future Presidents be Natural Born Citizens would never have been written.  Instead he would have penned it with different context.  That letter might have looked something like this:

As we heal from the great war of our revolution it is imperative that we protect this great new society from falling back into the hands and control of a foreign power.

Therefore, I suggest to you that it should be included in our Constitution that protecting our country from foreign influence be restricted to just 50% of our ability. As such we need to consider affording one of two parents of any future President, the potential of having foreign alignment or affiliation to a country other than America.

Sincerely and respectfully yours,

After reading that letter, if it had been so written, George  might well have sent the padded wagon over to pick up the future Supreme Court Chief Justice, for a one way trip to the looney bin.  That letter of course was never written and we can thank God for the brilliant leaders of the past, as we pray we survive the treason of the present.

Why a natural born citizen?

If there remains any doubt as to why that suggested requirement presented by John Jay and agreed to by George Washington, demanded that all future Presidents of this country be born of two US citizen parents, one needs to look no further than the Islamic usurper who is using the office of the Presidency to destroy our country.

Now, as this country stands teetering perilously on the edge of cultural and economic collapse, a position created under the façade of political correctness and fortified by white guilt, consider what we have wrought by ignoring Article II, by having but one locked door which has left the other door open to an illegal and ineligible fraud who hates this country, despises our Constitution and can barely contain his contempt for the success of America.

Will we once again ignore the insight, the brilliance and the common sense, our Founding Fathers have gifted upon us?  Will we accept and thereby reinforce the previous violations because this time, the ineligible candidate is one of ours?  Will common ignorance become as common as common sense used to be? Let us pray not.

We have a chance now, to re-lock those doors, seal the breaches and protect what is left of our dwindling liberty.