Yehoshaphat Harkabi literally wrote the book on Arab attitudes toward Israel and the Jews. But he utterly failed to understand his own observations. Benjamin Netanyahu seems to have followed his bad advice. Observe the results–predictable since the Six-day War.

Warlike voices from the past

According to an Egyptian spokesman, “The propagandists of secularism, who leave out of account the religious factor in the Palestine problem, ignore the fact that this is the only bone of contention in the world which has persisted for thirty centuries …”

Another Arab spokesman declared:  “… apart from the political conflict, there is a basic philosophical and spiritual incompatibility between the two contending nationalisms.  Even if all political disputes were to be resolved, the two movements, Zionism and Arab Nationalism, would remain, spiritually and ideologically, worlds apart–living in separate ‘universes of discourse’ which are incapable of communication or meaningful dialogue.”

Neither of these Arab spokesmen regards territory or geographical boundaries as a decisive issue in the Arab-Israel conflict. In fact, both statements were made before 1967, i.e., before Israel repossessed Judea and Samaria, which has since been the target of the Palestinian Authority (PA), and which Prime Minister Benjamin Netanyahu has been quite willing to yield to since June 14, 2009 when, without or public or Knesset debate, he endorsed the creation of a Palestinian state in that cradle of Jewish civilization,

Returning, however, to the statements of the two Arabs mentioned above, their statements will be found in Professor Yehoshafat Harkabi’s book, Arab Attitudes to Israel, apparently, Netanyahu’s political bible. 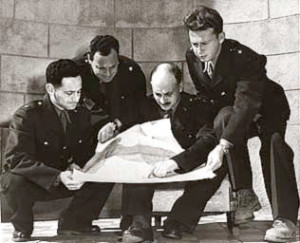 Yehoshaphat Harkabi (extreme left) made part of the Israeli delegation to the 1949 Armistics Agreement talks. The rest of that delegation included Aryeh Simon, Yigael Yadin and Yitzhak Rabin.

The book was written in Hebrew just before the Six Day War of June 1967. An English edition appeared in 1972, that is, before the Yom Kippur War. The book is replete with hundreds of quotes from diverse Arab sources, all vilifying Jews and Israel in the most lurid terms and promising the eventual annihilation of the Jewish state.  Netanyahu has had quite a mentor! In Harkabi’s 500-page tome, we find not a single exception to its ventilation of Arab hatred, citing even Muslim clerics. Yet Harkabi, former Director of Israel Military Intelligence, was convinced before the Six Day War, as well as before the Yom Kippur War, that a peaceful solution to the Arab-Israeli conflict was possible. I mention this because Prime Minister Netanyahu has not deviated from Harkabi’s teaching judging from his twenty years of on-again, off-again negotiations with the Palestinians. Netanyahu has been  the most ardent disciple of Professor Harkabi.

I single out Professor Harkabi because he was not only an internationally prominent academic and reputed expert on the Arab-Israeli conflict. Harkabi was also a former head of Israel’s Command and Staff and College, and I know of no one who better exemplifies the moral equivalence underlying the “two state solution” to the Arab-Israeli conflict. This is starkly evident in Harkabi’s book Arab Attitudes to Israel, which is dedicated to Jews and Arabs alike!  Harkabi is Netanyahu’s most significant mentor!

The central intellectual and moral stimulus of that book is that the unmitigated Arab hostility toward Israel is obscured and even negated in a “denial” syndrome embodied in Israel’s intoxication with the idea of “peace.” This idea has become a moral equivalence fixation to which Netanyahu resorts despite his awareness of incessant contradictory Arab stimuli. This denial syndrome as been analyzed by Harry Stack Sullivan and other eminent clinical psychologists.

The moral equivalence syndrome is stunningly manifested in the book, Israel’s Fateful Hour (1988), which is also dedicated to Jews and Arabs! Having studied Harkabi’s writings at length, I dare say it was primarily Professor Harkabi that fathered Netanyahu’s endorsement of a Palestinian state. Bibi’s academic mentor on Arab culture informs us that history “repeatedly demonstrates the ability of peoples to transcend the negative characteristics that were once justifiably ascribed to them.”

But have any people “transcended negative characteristics”?

Unfortunately, Professor Harkabi does not offer examples of such peoples. Hence his readers, such as Netanyahu, were not told how people like Israel’s Arab enemies transcended their “negative characteristics.”

After all, it makes all the difference in the world to know whether the peoples Harkabi had in mind were conquered in war (like Nazi Germany and Japan), or whether their “negative characteristics” were overcome as a result of evolution or of revolution.

Nor does Harkabi enlighten us about these “negative characteristics.”  We are left to wonder about the peoples Harkabi had in mind. Were they animated by a more or less pliable and transient mentality, or are they disciples of Muhammad, a warlord?  However, since Harkabi advocated the establishment of a Palestinian state led by unrepeated terrorists, he was obviously alluding to Muslims and to what he himself termed their “negative characteristics.”

Conversely, Harkabi reveals these negative characteristics in his candid book Arab Attitudes to Israel.  Writing at a time when one did not have to fear the mindless charge of racism, Harkabi refers to Islam as a “combatant,” “expansionist,” and “authoritarian” creed.  He admits that “The idea of the Jihad is fundamental in Islam,” in consequence of which “hatred,” “hostility,” and “conflict” are endemic to Arab culture (p. 133).

Furthermore, he acknowledges that “the use of falsehood,” “distortions of the truth,” and “misleading slogans” are typical of Arab political life.  “Political scientists, sociologists and historians,” he musingly writes (alluding primarily to Americans) “seem to feel reluctant to mention this aspect of their analysis of the Arab world” (p. 337).… Harkabi goes so far as to suggest that mendacity is “second nature” to the Arabs, that one may rightly regard “falsehood as an expression of [Arab] national character.”  For support he quotes [the liberated]Arab sociologist Sonia Hamady:  “Lying is a widespread habit among the Arabs, and they have a low idea of truth” (p. 348)….

Nevertheless, Harkabi, Bibi’s most significant mentor, was convinced that the Arabs in question have either transcended these “negative characteristics,” or will readily shed them, if Israel will but withdraw from Judea and Samaria and permit the Arabs in question to establish thereon a sovereign Palestinian state.

But even if it be granted that Arabs can transcend their “negative characteristics” – a pretty insult – common sense would dictate that Israel should not withdraw to its vulnerable 1949 armistice lines until Muslim leaders not only preach peace instead of war, but show tangible evidence that they are not engaging in prevarication.  After all, deception is a basic principle of war, a fortiori of warlike regimes.  Hence it may be argued that Israel’s withdrawal would only encourage the bellicose and disdainful qualities Harkabi attributes to Arabs and Islam.

Finally, it should be noted that for Harkabi to speak of the “negative characteristics” of any people is paradoxical, since he is a self-professed moral relativist, as may be seen in his book Israel’s Fateful Hour (page. 179).

*Based on my book Demophrenia: Israel and the Malaise of Democracy (published in 1994). “Demophrenia” is defined in Chapter 5, which shows that “demophrenia” is a mental disorder rampant in democracies, where moral relativism inhibits the ability to distinguish between good and evil or to resolutely confront anti-democratic or terrorists groups and nations.