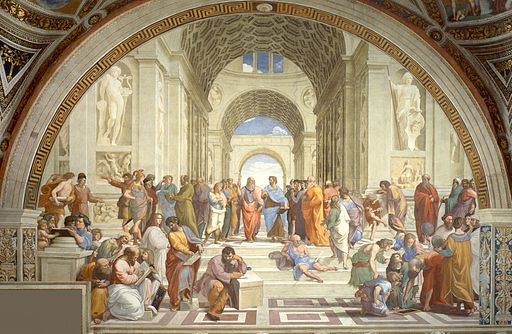 Man is tottering on an abyss. Violence punctuates daily life in a world increasingly portrayed as meaningless. We are strangers, not only to each other but to ourselves. The “crisis of identity” has become a cliché. Familial and national ties have been eroded; we are homeless cosmopolitans. Indeed, no less than the President of the United States boasts of being a “cosmopolitan”! He emulates the Swedes, who replaced their heritage with multiculturalism.

Not knowing who or what we are, we lack the hauteur and confidence of cosmopolitans of the past. They believed in Universal Man, in man sub specie aeternitatis; we believe in nothing. Our humanism is empty; we can’t even take our own humanity seriously. Nihilism has rendered the distinction between man and beast problematic. What, indeed, is noble about man that anyone should boast of being a “humanist”? 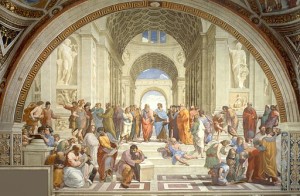 The School of Athens. Painting by Raphael.

When man becomes problematic, enter civilizational decay, but also the possibility of renewal. Such was the case some twenty-four hundred years ago when Greek sophists like Protagoras exulted in teaching youth that “man is the measure of all things.” This unheard of and skeptical doctrine (the dogma of today’s universities), signifies that all ideas concerning the True, the Good, and the Beautiful are human creations, relative to time and place. Socrates saw that this secularism and relativism would eventually destroy the Olympian gods and was even then undermining public morality in Athens. The sophists, the Greek counterparts of today’s “value-free” social scientists, were broadcasting the death of Zeus, the pagan god of justice. Without Zeus, what would hold society together? Without the traditional understanding of right and wrong, men would devour each other like animals.

Enter Socrates. His task, completed by Plato and Aristotle, was to substitute a restrained skepticism for the sophists’ unrestrained skepticism, lest men revert to beasts. The world-historical function of these Athenians was to construct a philosophy of man and a world view that would replace the no longer credible mythology of the Homeric cosmos. Accordingly, and as dramatized in The Republic (when the god-fearing Cephalus leaves the dialogue), philosophy replaces religion and the philosopher replaces Zeus. No longer are the gods to rule mankind, but reason – unaided human reason – would henceforth determine how man should live.

Of course, neither Plato nor Aristotle was so naïve as to expect the generality of mankind to defer to the rule of philosophers. Apart from other considerations, philosophers are not only as quarrelsome as the offspring of Zeus and Hera, but, unlike the Olympians, they are mortal: here today, gone tomorrow. Something impersonal as well as immutable and eternal was therefore needed to command the obedience of man. What else could this be but Nature – nature divested of Homeric deities. Neither the gods nor man but all-encompassing Nature was to be the measure of all things. And this Nature, far from being arbitrary and mysterious, was fully accessible to the human mind.

The magnitude of Aristotle’s program has not been surpassed in the history of philosophy. He merely set out to comprehend the totality of existence, to reduce heaven and earth to an organized system of theoretical, practical, and productive sciences. To borrow the terminology of Rabbi J.B. Soloveitchik in Halakhic Man. Aristotle would tolerate no randomness or particularity, no mystery to obscure the fleeting events of existence. Everything had to be fixed, clear, necessary, ordered. Nothing was beyond the grasp of the human mind because Nature, or the Cosmos, was an intelligent and therefore intelligible whole.

With Greek philosophy a new type of man appeared in the forefront of world history, Cognitive Man. Cognitive Man is a secularist who deifies the intellect. He must therefore be distinguished from his secular rivals, Volitional Man and Sensual Man. Whereas Cognitive Man seeks to understand the world, Volitional Man wishes to conquer and change it, while Sensual Man simply wants to enjoy it. Only with the ascendancy of Volitional Man, personified by Machiavelli, did secularism come into its own as the regnant force of history.

Of course, Machiavelli had collaborators: Hobbes, the father of modern psychology: “The thoughts are to the desires as scouts and spies to range abroad and find the way to the things desired”; Hume: “Reason is, and ought only to be the slave of the passions.” The influence of these two harbingers of Sensual Man explains why we are not used to thinking of Platonic-Aristotelian philosophy as secular.

Plato and Aristotle pay nothing more than lip service to the divine. True, the refinement of their writings conveys great piety. What gives the lie to this impression is that neither philosopher regarded piety as a virtue. We must also bear in mind their caution and civic-mindedness. Socrates, the master of irony, was given the hemlock for atheism. And what with the widespread corruption in Athens resulting from affluence, a disastrous war, and the unabashed atheism of so many intellectuals, it would have been reckless for these aristocrats of the mind to have joined the scoffers of a religion which, whatever its shortcomings, did provide some salutary restraints on the passions of men.

There are refined and vulgar forms of secularism. Plato and Aristotle’s is couched in pious language not only for political and pedagogical reasons, but because, in their species of humanism, the philosopher is virtually divine. By no means is the philosopher to be confused with the academic professor of philosophy. No one has portrayed the difference more powerfully than Nietzsche in Beyond Good and Evil (Part VI, “We Scholars).” For these giants of the intellect, Cognitive Man is the passionate lover of wisdom, where wisdom is nothing less than knowledge of the organizing principles of the universe.

But what is most distinctive of Cognitive Man, whether philosopher or scientist, is his attempt to reduce the fleeting phenomena of existence to lawfulness. This is as true of Platonic-Aristotelian philosophy as it is of Galilean-Newtonian physics, despite their very different conceptions of lawfulness. Both schools seek to discover the riddle of existence in some scientific order or pattern of the world. This is the aim of Cognitive Man.

Man tries to exist without God

However refined the quest of Cognitive Man, what unites him with his secular counterparts, Volitional and Sensual Man, is that, like them, he does not pursue the object of his desire to glorify God. The reason is quite simple: for Cognitive Man such a God does not exist. Aristotle, like Spinoza, is a “pantheist.” His Prime Mover is an extrapolation from the principle of motion (Physics 251b17-25, 266a5). As for Plato, his Demiurge is not a creator but an artificer that imposes order on a preëxisting chaos (Timaeus 30a, 52d-55, 69b). One thing is clear: both philosophers rejected the idea of a personal God. Otherwise piety would be a virtue.

To be sure, the human psyche is not so easily compartmentalized. Cognitive Man may shade into Volitional Man. Thus Aristotle taught Alexander the Great political science; and politics. However, for Aristotle politics is but the application of philosophy to action. Let us see how Aristotle deals with this issue.

When Aristotle inherited the concept of nature from his teacher Plato, that concept had already been demythologized and transformed into the impersonal and immutable standard of how man should live. Aristotle enriched and systematized the idea by developing an organic and teleological theory of nature. Such was the success of this theory that it had no serious rivals in abodes of learning until the seventeenth century. Vestiges of organicism may be found even in Kepler. However, not until the mechanistic theory of nature fathered by Galileo and Newton was organic concept of nature laid to rest.

What made the organic (and teleological) theory of nature so alluring and enduring is that it appealed to common sense. Observe the growth of a tree from its seed and it will seem that the processes of nature are inwardly directed toward an end or telos. The end is that toward which a living thing strives in order to reach its completion. So it is with man. Neither force imposed from without, nor chance, so much as an immanent impulse prompts man to form associations that can fulfill his potentialities. The most self-sufficient and comprehensive association is the political community, the polis, which alone can complete or perfect man’s nature. Whatever contributes to that end is called “good.” Nature is thus the standard for judging what is good (or bad); there is no other.

Could there be a more impersonal yet intimate and benign substitute for the Olympian gods? Must we not marvel at Aristotle’s genius? By creating a new foundation for morality, Aristotle became one of the greatest “legislators” of mankind.

This organic and teleological conception of man and nature was shattered by Galileo and Newton, the founders of modern science. Their mechanistic conception of nature left nature devoid any moral compass. Neither the quantum theory of Plank nor Einstein’s general theory of relativity provides a scintilla of light on how man should live.

When Nietzsche announced that “God is dead,” he was also announcing, wittingly or otherwise, the death of man. Modern man had become “human-all-too-human.” Thus was born Nietzsche’s desperate idea of the ubermensch. He asked “whither are we going?” and we are living today without an answer. This will compel us to return to Israel.☼

Mural art of war (and peace)

gee,humans lived for centuries before someone invented a god and will continuew to live until the planet destroys them.

there is no god,its so obvious.

How obvious? Care to elaborate?