Listening to the many talk shows, watching interviews with politicians and clicking on an array of videos splattered across social media, it dawned on me that there were various reasons and multiple types of people as well as many groups, which either despise Donald J. Trump, fear him or in some cases, both.

So it’s time to analyze these entities, lay out the reasons each of them have for the positions they hold and why they have done so.

Let’s identify these groups and individual types. They can be easily defined simply by assessing their characteristics, activities and attitudes over many decades. As we define these people and groups, it is quite possible one could find purchase in several categories.

Here then, a list of the frightened and the haters:

The Republican Establishment-This group, while those who are part of it work constantly and diligently at preventing outsiders from joining, actually deny that they even exist. These people are the self-anointed elites, the ones who have spent years if not decades encouraging support for platforms of moderation. They are the keepers of the gate, and the defenders of the status quo.

The Democratic Party –This group too has its elites but who is permitted membership carries little concern provided any aspect of their ideology represents or supports the defeat of conservatism, capitalism, liberty, the expulsion of God, the family structure and of course, the rule of law which is represented by our Constitution.

The Media– This entity gives the word “elite” a whole new meaning. They no longer even consider purveying the truth, of which they care less about than they do the future of this country. Insulated from responsibility or reprisal and void of morality and conscience, they inhabit a sort of kingdom where ideology is the only guiding parameter.

Government agency bureaucrats– this bloated collection of taxpayer-funded bottom feeders is by far the most corrupt of them all. It consists of millions of leftist ideologues who interfere with productivity and drain financial resources from individuals and businesses alike. They rule outside the confines of constitutional law as they not only waste billions of dollars every month but are stealing more than anyone could possibly put a number to.

Lobbyists and donors– despicable is by far too weak an adjective to describe these enemies of a democratic society. These people are either employed by or under contract with foreign governments, corporations, hedge fund purveyors and unscrupulous individuals. Their job is to hand out hundreds of thousands or even millions of dollars to the members of the two parties and the bureaucrats (referenced above) in exchange for whatever it is they need. They profit handsomely and the corporations make billions and the politicians build substantial nest eggs. All of which occurs at the expense of the American people.

The conservative republican voter– these individuals agree with much of Trump’s platform but harbor concerns that he may not do what he is campaigning on or that he will just not be able to.

The unaffiliated or independent voter– some of these people are not comfortable with Trump’s tone and base that on the false perception that hard rhetoric and lack of political correctness is not presidential.

The left leaning democrat voter –these people are for the most part either under-informed, under-educated or indoctrinated into the belief that they should get what others have earned. They will only support candidates who promise them free stuff and will never consider the consequences of that free piece of cheese sitting prettily on the mouse trap trigger.

The envious or jealous voter– these people compare their own failures or successes to those of Donald Trump and instead of admiring what he has accomplished they have turned envy green and as such have lost all perspective of what he can do for the country. This a small group and probably will have no sway nor an inclination to reevaluate, as this type of emotion overwhelms all ability to reasonably process logical thought.

Here now a list of things which have fired up the fear and hate:

Trump has promised that:

As you read these 44 items try to bear in mind the 9 Trump hater types listed above. Then place yourself into the appropriate category. It’s quite likely many will find they fit into more than one. Great Americans will find a home in none.

Will any other candidate do anything Trump promises to do?

A question one should present to him or herself, is this. Will any of the other candidates even try to do any of these 44 things? Or will they just play the traditional lip service which has been the establishment’s election play book?Fool us once, shame on them. Fool us for 50 years, shame on us.

So, maybe Trump can’t get all of these things done. Maybe he won’t be able to get even most of them done. But beware, those who have underestimated him over the past 45 years have paid dearly for those errors in judgment. Clearly the establishment and the media are not so sure. 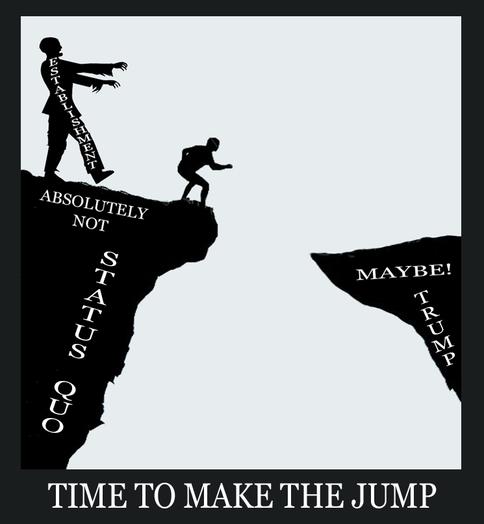 Abandoned patriots in this country have dreamed of a third party, dreamed of someone who would and could do what this country needs. That dream has become reality in the form of Mr. Trump. He is that third party. Not because he wanted to be but because the haters, the crooks and the back room dealers have forced him to be. Thanks to Mr. Trump, if the Republican Party does not wise up, their party will be the new third party and it may never recover. Haven’t heard from the Whig Party lately, have we?

By now you may have either placed yourself into one of those 9 Groups or quietly disengaged from them. You may in fact chose to remain there. But for the rest of us, many millions of us, we have decided to go with the “maybe” associated with Donald Trump as opposed to the “absolutely not” guaranteed by the establishment. Which by the way does not exist, just ask them.

The Republican Party over the years has supported Ford, Dole, McCain and Romney and now it has the “pelotas de laton” to declare that Trump is not conservative enough? Talk about disengaged.

I want Ted Cruz to the next President of the United States of America because he know and will follow the Constitution. That being said, make no mistake that if Donald Trump does win the nomination I will vote for him because he is much much better than the angry old white Socialist man or the Criminal old Socialist woman the democrats are running.