Despite the demise of the Soviet Union, Russia remains a country without real elections, independent courts, or freedom of the press. Russia is a country where journalists and human rights activists are silenced or killed regularly.

So what preoccupies the media in the West regarding the Russia besides Vladimir Putin, who has been Russia’s President of Russia since 2012, and Russia’s military presence in the Crimean peninsula, in the Ukraine? Clearly, Russia remains an important actor in world affairs. It has lots of gas and oil, and energy is Moscow’s political trump card, which the wily Putin uses to pressure and blackmail Europe.

Russia is also interested in the Middle East. The civil war in Syria provides Russia an entry for its never-ending imperial ambitions. Syria, as well as the Ukraine, may be used as a base to expand Russian power in the Mediterranean and thereby threaten NATO’s southern flank.

A brave Russian speaks out 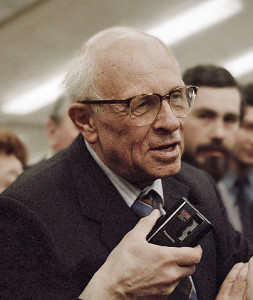 In striking contrast to this Russian atavism, as well as to the strange anti-Israel alliance between left-wing American academics and Islam, ponder the courageous views of the famous Russian Nobel Peace laureate and nuclear physicist, the late Andrei Sakharov, who wrote various articles in support of Israel.

Unfortunately, I have not been able to retrieve the source of those articles via Internet, but allow me to replicate what I have pertaining to Sakharov’s remarks:

All wars that Israel has waged have been just, forced upon it by the irresponsibility of Arab leaders. With all the money that has been invested in the Palestinians, it would have been possible long ago to resettle them and provide them with good lives in Arab countries.

Now, a new motif is fashionable (in fact it’s an old one):“Two states for two peoples.” It sounds good. And there is no controversy in the peace-making Quartet, made up of the U.S., the UN, the EU, and Russia (some great peace-maker, with its Chechen war). The Quartet, and the Arab countries, and the Palestinian leaders (both Hamas and Fatah) put additional demands to Israel. I will speak only of one demand: that Israel accept [the return] of Palestinian refugees. And here a little history and demography are needed.

According to the UN’s official definition, refugees are considered those who fled from violence and wars, but not their descendants who are born in another land. At one time the Palestinian refugees and the Jewish refugees from Arab countries were about equal in number — about 700-800,000. The newly created state Israel took in Jews (about 600,000). They were officially recognized as refugees by the UN Resolution 242, but not provided with any UN assistance. Palestinians, however, are considered refugees not only in the first generation, but in the second, third, and now even in the fourth generation. According to the UN Works and Relief Agency’s report, , the number of registered Palestinian refugees has grown from 914,000 in 1950 to more than 4.6 million in 2008, and continues to rise due to natural population growth. All these people [are said to] have the rights of Palestinian refugees and are eligible to receive humanitarian aid.

The entire population of Israel is about 7.5 million, of which there are about 2.5 million ethnic Arabs who call themselves Palestinians. Imagine Israel then, if another five million Arabs flood into it; Arabs would substantially outnumber the Jewish population. Thus, created next to Israel will be a Palestinian state cleansed of Jews, because in addition to the demand that Palestinian refugees return to Israel, there is also the demand that Judea and Samaria are cleansed of Jews and turned over to Palestinians – while in Gaza today there is not a single Jew already.

The result is both strange and terrifying, not only because Israel will essentially be destroyed… Because the plan“two states for two peoples” is the creation of one state, ethnically cleansed of Jews, and a second one with the potential to do the same thing. A Judenrein Holy Land – the dream of Adolph Hitler come true at last.

Why can’t the articulate Prime Minister of Israel quote some of Sakharov’s remarks on every public forum, especially in the United States? But how can he do this when he himself has publicly advocated “two states for two peoples”!?!

Conflict resolution: turn that around

Putin rules in the style of the czars, not the Soviets, and under the czars, the people were free, especially before Peter the Great, which was after western influence took advantage of a schism of the Old Believers from the Russian Orthodox Church. The oil tycoon guy went to jail for a money laundering scandal. Putin assassinating people is just conspiracy theory.

If Putin is a dictator, then why is he allowing his people to own firearms for self-defense since November 2014: https://www.rt.com/news/206703-russia-guns-self-defense/

Putin rules in the style of the czars, not the Soviets, and under the czars, the people were free, especially before Peter the Great, which was after western influence took advantage of a schism of the Old Believers from the Russian Orthodox Church. The oil tycoon guy went to jail for a money laundering scandal. Putin assassinating people is just conspiracy theory.

If Putin is a dictator, then why is he allowing his people to own firearms for self-defense since November 2014: https://www.rt.com/news/206703-russia-guns-self-defense/

Does he allow absolutely every lawful resident to own or carry?

With a license, yes.

What does his law require for such a license?

How do you qualify a need for self-defense? That is an absolute right.

You know, against criminals. You might as well could look into it. Have you read the article or even the title of it?

I should have thought no one need get any kind of license for a thing like that.