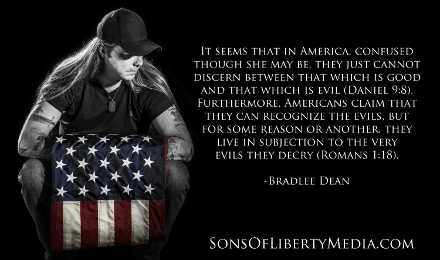 “True glory takes root, and even spreads; all false pretences, like flowers, fall to the ground; nor can any counterfeit last long.” – Marcus Tullius Cicero

Barack Hussein Obama once again exhibited his absolute disdain for the truth when his lies fail to advance his agenda. He calls out anyone that would dare question the rigged voting system as “ludicrous.” Yet, when it fails to keep him in power all of the sudden the voting system needs investigation.

When are the people in this country going to discern the evil and the hypocrisy of this current, corrupt administration? (Hebrews 5:14)

It seems that in America, confused though she may be, they just cannot discern between that which is good and that which is evil (Daniel 9:8). Furthermore, Americans claim that they can recognize the evils, but for some reason or another, they live in subjection to the very evils they decry (Romans 1:18).

On Islam and abortion

For example, Americans have tolerated a foreign agent in the people’s White House. Though he ran on his Christian faith, he has through his speeches and actions done that which contradicts the Christian faith (1 John 2:4-6). He has omitted “Creator” from his recitations of the Declaration of Independence, and omitted “under God” in recitation of the Gettysburg Address speech.

This is the same criminal against God and humanity who has done more to advance the murder of the innocent in the womb more than any other president (Proverbs 6:17). Bradlee, why are you on this topic again? It’s because the American people have failed to bring to justice those who advocate the lie that abortion is legal (Isaiah 26:9). He previously voted over 242 times to in his short tenure as an Illinois senator for such murderous actions.

As you know, Planned Parenthood founder Margret Sanger said, “The most merciful thing that the large family does to one of its infant members is to kill it.”

From true nature to unnatural act and practice

This is the same man that has advocated the lawless sodomite agenda by appointing Kevin Jennings as the “Safe school czar,” whose idol is hero Harry Hay, an icon from an organization called “North American man Boy Love Association.” Their slogan is “Sex before 8 before its too late,” but America, you already knew this. As you know, Obama has appointed over 225 homosexuals, lesbians and transgender to governmental positions.

He is responsible also for attacking North Carolinians and their governor by demanding that they either accept his neutral gender bathroom bill lead by convicted sex offender Chad Severance or else he would withhold tax dollars in aid to that particular state.

This is the abomination that the American people have accepted from a professed “Christian” man (2 Corinthians 11:14). He advocates that which God condemns.

This is the same man that Americans have been dumbed down to believe that he knows better than the God of our Lord and Savior (from sin) Jesus Christ by warring against His written Law (Hosea 4:6; Isaiah 14:13; Exodus 20).

Aid and comfort to enemies

On the heels of the sodomites, Obama has supported the Muslims, which I have been warning since 2005.

Obama has aided the enemies of America both within and without (Leviticus 26:17; Deuteronomy 28:36; Article 3, Section 3 of the United States Constitution). He stacked governmental positions with Muslim Brotherhood operatives. He also has armed, as well as financed, America’s enemies in the face of the American people.

“The future must not belong to those who slander the prophet of Islam,” said Obama before the United Nations.

He has played the Judas with the American people by kissing them with lie after lie all while betraying them (Proverbs 26:28). Still, the American people do not realize that these are the actions of Satan himself as he moves to “steal, and to kill, and to destroy” (John 10:10).

One doesn’t have to question Obama’s ties to Satan. After all he was a disciple of Saul Alinsky, who dedicated his “Rules for Radicals,” the handbook for a leftist takeover strategy, to the devil.

Lest we forget at least an over-the-shoulder acknowledgment to the very first radical: from all our legends, mythology, and history… the first radical known to man who rebelled against the establishment and did it so effectively that he at least won his own kingdom — Lucifer.

Americans have taken this minion to be that of a disciple of Jesus Christ. Nothing could be further from the truth.

The Bible is No mere Book, IT IS A POWER THAT CONQUERS ALL THAT OPPOSE IT!

Americans can attempt to decry the truth of what has been written here. But the fact of the matter is that they have accepted his actions by being accomplices to his crimes. They can accept his lies better than most in this country know how to live out the truth (Jeremiah 2:19).

The revisionists of the day have been busy tearing away at the character of those who established this country in an attempt to put themselves in their place. Is it working?

The Good, The Bad and The Righteous.