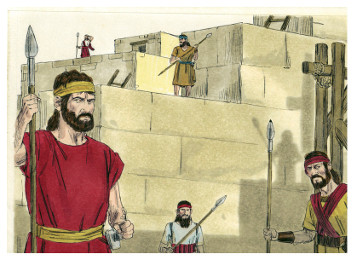 Since 1948 or for 68 years, Israeli prime ministers – all secularists – have banished God from the domain of statecraft, and with the virtual compliance of the religious parties. May there not be a connection between the absence of God in Israeli statecraft and the absence of wisdom, courage, and Jewish pride among Israeli politicians?

How is it that Israel, once so powerful in war, succumbed to the gang of terrorists led by Yasser Arafat’s and his successor Mahmoud Abbas? Can it be because Israel’s ruling elites are godless in contrast to these Muslims who never fail to invoke the name of Allah? Never mind their hypocrisy and murderous hearts. Because they sanctified Allah, Muslims advance while Israeli prime ministers, who sanctify nothing, retreat.

The asymmetry between the Muslims and the Jews may be seen in the psychological consequences of their respective goals. Whereas the initial and expressed goal of the Muslim Palestinians is statehood, a goal that arouses Arab pride and spirit, the Jewish goal exemplified by PM Netanyahu is “peaceful coexistence” via the “two state solution,” which arouses Jewish self-effacement, humiliation, and defeatism.

Clearly Israel desperately needs a government whose leaders are animated by a goal rooted in the heritage of the Jewish people. Unlike other nations, Israel knows why it was created. It was created to reveal the infinite wisdom, power, and graciousness of God in every domain of existence. It was created to convey to mankind the example of a nation in which freedom dwells with righteousness, equality with excellence, wealth with beauty, the here and now with love of the Eternal.

What secularism has wrought

Secularists may scoff at these remarks, but seven decades of secular leadership in Israel have not restored Jewish honor or even security. The secular Zionism that established the State is dead. The time has come to bring God back into the domain of statecraft.

I am not proposing theocracy, which has no operational significance in Torah governance. There is no ruling class in Torah Judaism. Never in Jewish history did the Kohanim or misnamed “priests” exercise authority in the daily life of the Jewish people. Judaism is not a clerical religion. In fact, the illustrious Rabbi Samson Raphael Hirsch has said that the term “religion” is the greatest obstacle to understanding Judaism, which is not a religion so much as a truth-oriented civilization.

I am no admirer of Israel’s religious parties, which typically use the Torah for politics instead of politics for the Torah. Their ungodly collaboration with Israel’s secular elites has brought Israel to its present nadir. They say nothing and do noting while Israeli prime ministers release Arab terrorists and make ignominious concessions to the murderers of Jewish women, men, and children.

If Israeli prime ministers believed in the God of Israel they would have inflicted swift and devastating vengeance on these murderers of our people. Why any Jew should expect peace from Arab despots animated by a Jew-hating, bellicose religion, when Jew-hatred thrives even in peace-loving Europe, is a commentary on the imbecility of the secular democratic mind.

Time to return to God

And so every sensible Jew deplores Israel’s lack of Jewish leadership. Every sensible Jew knows that Israel’s political leaders have betrayed the people’s trust, have surrendered Jewish land contrary to their party principles or campaign promises. Is it not obvious that Israel, steeped in politics and led by a government without God, has become increasingly wretched and helpless?

Hence now is the time to sanctify God’s Name by a massive rejection of Israel’s perfidious and pusillanimous government. Are there no anti-Establishment rabbis with courage enough to come forward and warn our people about the Road Map to Oblivion? Are there no heads of yeshivot with courage enough to come to Jerusalem with hundreds and thousands of students and followers to sanctify God’s Name by saying “Enough”!

Enough of this desecration of God’s Name by yielding to Arab murderers and misconceived American interests! Away with this godless government! Let us here and now form a parallel government in Judea and Samaria and there create an authentic Jewish Republic, one that inspires conviction and courage and calls to its banner all the people of Israel, and does so in the Name and for the sake of God.

Without God Israel is lost!◙

Travesty of the United Nations