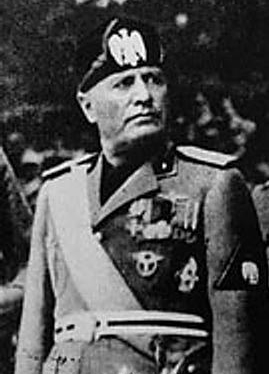 Hello this is Darrell Castle with today’s Castle Report.  On today’s report I will be discussing the topic of whether the right to speak freely still exists in America, or whether it has been extinguished by the combined efforts of Corporate America and Government America.

When Benito Mussolini rose to power in Italy, he adopted the Roman Fasces as his symbol. The Fasces is an axe surrounded by reeds or sticks, denoting centralized power.  Since he chose that symbol, his system of government became known as “fascist.” But he said it would be more accurate to call it corporatism, because it blends government and the corporate world into one.  In this report, I argue that we are at least approaching that position today with regard to free speech rights.

In 2011, the Swiss Federal Institute of Technology conducted a study to determine who owns what and who controls what in the corporate world.  They studied 37 million different corporations and investors, finally narrowing it down to 43,000 trans-national corporations.  The 43,000 corporations were all “inbred”, or said another way, they all owned each other.  The group was then narrowed down to 167 corporations that actually control all the others, and of that 167, just 20 banks control them.

That study was in 2011, and I’m sure the number of the most powerful banks is much smaller now.  For example, Goldman Sachs was 19th on the 2011 list and it would be hard to imagine a more powerful financial organization now.  These financial houses become revolving doors for the government with their CEO’s rotating in and out of the office of Treasury Secretary, etc.  Government blends with, and virtually becomes one with, the corporate world.  It is widely assumed that in 2007, when the global financial system was on the verge of collapse thanks to risky investments by the great financial institutions, Henry Paulson, of Goldman Sachs, briefed Congress so they could engage in insider trading in order to profit individually from the disaster.  Insider trading was perfectly legal for them but a crime for us.

This report is not meant to be a discussion of banks and their power over all of us and how they have enslaved the whole earth through credit and debt owed to them, but instead it is a discussion of free speech, and how the corporate world is uniting to control it for their own purposes.  We are at, or at least nearing a point, where only one view is acceptable to be presented.  I don’t mean that only one view is right because that is normally the case, I mean that only one view can even be discussed.  Should any view other than the prevailing narrative widely considered acceptable be presented, there will be severe repercussions.

I don’t mean that someone from the government will show up at your door with a gun and arrest you.  The first amendment is still in effect to that extent, although what you say or write could qualify as hate speech, in which case the government might make an official visit.  What I mean by severe repercussions is that the corporate world will act in place of the government and will release its hounds to destroy your life.  James Damore, an engineer at Google is an example that most everyone is familiar with.  Mr. Damore is a highly intelligent man working for one of the world’s most powerful and sought after companies.  He was educated at MIT and Harvard where the smartest kids in the country go. Google recruited him to do coding and other computer engineering.

He was privy to much discussion at Google about the company’s lack of diversity in its work force.  It was apparent that virtually all of the company executives and lower ranking employees accepted the discrimination narrative as explanation.  He was different though, he studied, he did research, and once, on a 12 hour flight from California to China, he wrote a nine page memo containing his conclusion, which he sent via email to Google employees.  Damore concluded that it is possible that Google was not discriminating at all but there were actual natural conditions existing that explained the disparity.  He said that women, because of genetics were less inclined to become computer coders than men.

His memo set off a national firestorm because it was a departure from the prevailing narrative existing at Google and most corporations and as I said, that view is not allowed to be presented.  He was called a racist, white supremacist, sexist, Nazi, etc.  My understanding is that the CEO of You Tube/Google personally intervened to have him fired.  It is her right to fire who ever she wants to fire, but it is interesting to me that no consideration at all was given to whether his memo was truthful or not.  Nobody seemed to care to discuss its possible truth; the fact that he said it publicly was enough.

It seems to me that Mr. Damore was trying to offer Google a way out of its own hypocrisy.  Google is currently about 2% black, a little under 3% Hispanic, and about 20% women, but lectures us constantly about discrimination.  Given the public persona of Google there aren’t too many explanations for this disparity.  It is either a naturally existing phenomenon or there are all these women out there in Silicon Valley, with degrees from MIT, Harvard, and Stanford, in computer engineering but Google just says no we are not going to hire them, we only hire men, mostly Asian men, for those positions.

To further emphasize its hypocrisy, Google has concluded that most TV computer scientists are men and it wants that changed.  According to USA Today, Google is calling on Hollywood to give equal screen time to women and “minorities.” This Hollywood presentation of the stereotypical inept white male coder has to change, says the woman in charge of “multicultural strategy” at Google.  The company wants to influence TV through what it calls Google-influenced storytelling.  I suppose that’s one way of saying it, but another way is do as we say not as we do.

Of Google and their colleagues

I don’t mean to just signal out Google because the giant Information Technology Companies located in Silicon Valley all seem to be taking the same course.  Only those persons, groups, or political views approved by the IT Companies may be spoken or written about and even then we must speak or write about them in the most fawning, adoring manner or we are guilty of hate, we are a white supremacist, and a NAZI.  There is nothing between total, complete adoration and hate.  Mild disagreement or even mild approval isn’t permitted because only total capitulation will prevent your being labeled a NAZI.

Tim Cook, CEO of Apple, recently gave $1 million to the Southern Poverty Law Center (SPLC), and he told his employers he would match their donations two for one.  We know that it is very expensive for SPLC to fight hate.  There is so much hate they had 1500 groups on their list of hate groups this year.  SPLC, a 501c3, reported $50 million in contributions last year and just under $350 million in assets.  From the $50 million they had to pay money to help poor people with legal fees so they reported $62 thousand for that and $20 million for their 75 lawyers. Over 5 million in cash was deposited by SPLC in different Cayman Island accounts.  Like I said, fighting so much hate is expensive, and you never know when a new case will pop up and that offshore money will be needed.

Many seem to want free speech to be curtailed.  Last weekend the Wall Street Journal (WSJ) carried an article entitled “The Smartphone Generation vs. Free Speech.”  The Journal referred to those born after 1995 as iGen, or the first generation born with smart phones.  They have a concern for physical safety much as a small child does at home.  The child expects his parents to protect him not just physically but emotionally too.  For example, parents may try to keep from arguing in front of their child so the child will develop in a secure atmosphere.  According to the WSJ, these iGen college students expect, and even demand, the same thing from their college administrators.  They are grown children with technology in their hands.  This is especially true at expensive Ivy League Schools such as Yale, according to the Journal.

These young people demand that free speech of others be curtailed to prevent their being offended by it.  More than just offended they demand to be protected from even the most minute, sometimes ridiculously so, “micro-aggressions” or “triggers.”  We are to ensure that our speech does not trigger any emotional fear in them.  In order to do that we must conform our speech to the narrative prevalent on college campuses, and presented in the media.  The various IT companies that sell, and service their smart phones and run the search engines of the Internet, are their encouragers and supporters in their demands to restrict our speech.

A cloud of restriction

Finally folks, society lives under an oppressive cloud of speech restriction.  Often we know the prevailing narrative is not only incorrect but ridiculous.  Should we say that on You Tube, Twitter, etc., we will probably be de-platformed as many of my friends have been.  That is the term being used today when they take away your public platform to speak. Without Google, YouTube and Twitter, nobody hears you so you have no platform to speak.  We also live in fear that we may say something that even if true will get us fired or bring public shame and condemnation on us.

In other words, we are no longer free.