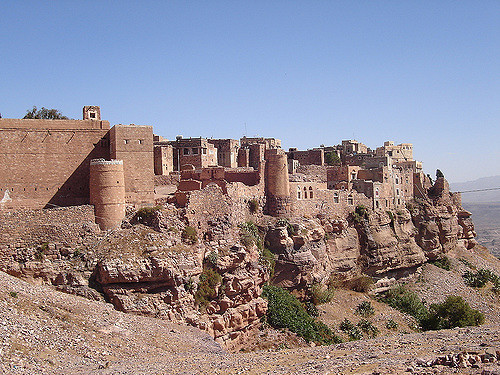 Hello, this is Darrell Castle with today’s Castle Report.  Today is Friday, October 13, 2017.  That’s right, today is Friday the 13th, a very appropriate day to discuss the Nation of Yemen, and the war that has been ongoing there for several years.  The war is bad luck indeed for the Yemeni people.  I’m certain they would much prefer to go back to their lives of misery and suffering, amid the rubble that has been made of their country.

Yemen and its geographical blessing and curse

Yemen has one thing going for it, though; one thing worth fighting for, one thing the great powers, such as the United States, believe to be worth the blood and treasure of their people, and that one thing is geography.  Yemen happens to be located on the southern tip of the Arabian Peninsula, at the corner of the Red Sea and the Arabian Sea, and it occupies one of the great oil choke-points of the world, as well as the southern border of Saudi Arabia.  Geography, then, is Yemen’s best asset but as we will see, it’s also its worst.

The land that is today called Yemen has been at war for centuries. But the ongoing struggle that I address today, has lasted only decades.  It seems that two rival groups, one the current government, and another group of Houthi rebels, struggle for control of the government and nation.  The Houthis are followers of Abdel-Malek Al  Houthi and they are Shia Muslim, as are virtually all Yemenis.

This struggle on its border for control of a Shia country, in other words a civil war, right on its southern border, was too much for Saudi Arabia to resist, so on March 25, 2015, it entered the conflict.  The Saudis brought along other Sunni nations including Jordan, Morocco, Bahrain, Kuwait, Qatar, Egypt, Sudan, the United Arab Emirates, Pakistan, as well as the European Union, and the United States.  ISIS has now also intervened as a separate entity for reasons we will discuss later.

Most of the thousands of civilian casualties suffered during this conflict have been inflicted by airpower.  The Saudis have bombed Sanaa, Yemen’s capitol city, relentlessly since the start of the war.  The United States has flown about 100 sorties into Yemen this year alone.  In addition, the United States has troops on the ground in Yemen, mostly Navy Seals and other special forces.  A Navy Seal was killed earlier this year on a mission inside Yemen.

There are many nations involved, and many nations contributing to the misery. But every bomb that falls, every artillery round that lands, and every bullet that’s fired has Made-in-the-USA stamped on it.

So today we look at what’s really going on here, and what’s the reason for destroying a country of 28 million people, whose lives would be very difficult in the best of times but virtually impossible in this war.

According to the United Nations (U.N.), more than 12,000 civilians have been killed and wounded in this conflict.  Since almost half the population of Yemen is under the age of 18, children account for a third of all civilian deaths.  What infrastructure Yemen once had has been destroyed, as well as the supplies of food and fuel, resulting in mass famine.  The U.N. tells us that 17 million are in famine conditions, about 6.8 million in severe famine, and about 462,000 children under age 5 are severely malnourished.  Two million homes have been destroyed. Hundreds of thousands of Yemenis have fled the country.  All efforts at peace seem to have failed, and so have efforts to avert a humanitarian catastrophe.

These are the results of a war in a desert country that has not much going for it except geography and the homes of 28 million people.

War for supremacy in Arabia

In our efforts to find a cause for all of that, and thus avert its happening over and over, we should understand the extreme anti-U.S. sentiment that has been created in Yemen by this conflict.  Yemen’s people know who is dropping the bombs and whose bombs are being dropped. They know that the United States and its people are complicit in their suffering.  However,  in trying to make sense of it all, we must recognize that others may see it differently from how normal people like us see it.  For example, sales of U.S. weapons to the Saudi government have increased since Donald Trump became president.  The military and defense weapons corporate partnership has never been more formidable, so I suppose defense manufacturers see it differently.

The Saudi Monarchy is very nervous right now. One might be tempted to call it paranoia. But forces really are out to get them and they know it.  The forces of radical Islam are massing at the gates of Saudi Arabia. Decades of war with the west, and hundreds of billions of Saudi oil money from the labor of U.S. taxpayers, have unleashed those forces.  These Jihadis are threatening not only to infect ordinary Saudis but to also destroy the Monarchy that rules them.  This radical army at the border of Saudi Arabia is the real reason for the destruction of the Yemeni people

Confrontation is coming for the role of the Saudis in the struggle for the Middle East.  The growing power of the Jihadis is spread like wildfire by social media.  ISIS is a lot more than just a military force.  To a large extent, the coalition of Russia and Iran has about defeated the ISIS forces in Syria militarily. But ISIS, the idea, is infecting Saudi youth and the young across the Middle East.  Right now the armed forces of the United States and the weapons it produces are the only thing standing between the Saudi Monarchy and the chaos that ISIS will bring.

When will the American people tire of spending billions to support a regime that is an anathema to everything they stand for?  Are the American people knowledgeable about what their government is doing or do they even care?  They should start to care, and soon, because extremist forces will eventually have their day. They always do in the Middle East and in America itself.

The irony of it all is that Wahabi Mosques pour fanaticism into the masses of Muslim youth in the Middle East, but especially here in America.  Those fanatic masses will eventually destroy the Monarchy that funded them.  It is the idea of a Caliphate that is infecting the youth of the Middle East.  Destroying ISIS militarily will not destroy that idea.  What will happen after the Monarchy falls in Arabia?  Will Arabia lead the extremist forces threatening the world or be consumed by them.

Eventually the Monarchy will fall.  The youth see it for what it has become, old, tired, and a servant of the hated Americans.  The masses have finally started to resent the way the thousands of Saudi Princes have squandered the country’s oil wealth on lavish lifestyles around the world.  The Princes, including the one chosen to succeed King Salmon, are certainly not indicative of the Muslim faith let alone Wahabiism.  Perhaps that is why the 86 year old Saudi King Salmon went to Russia this past week. We suppose he went to discuss oil prices and production as well as Iran’s role in Syria. Reports are that the meeting did not go well for the King in regard to Iran.  It seems that Russia needs Iran to make its Syrian intervention successful.

The Saudis are very nervous about threats to their authority. And the war on their southern border is certainly a threat. It is a war between a Sunni nation of Saudi Arabia and a group of Shia forces for control of Yemen. If Yemen falls to ISIS it could become a springboard for an assault by Iranian or Iranian backed forces into southern Saudi Arabia.  The Yemeni people don’t care about these international power struggles.  They just want to go back to their goats and olive trees. But that doesn’t seem to be in their future.

Robert McNamara, Secretary of Defense during America’s Vietnam War, once said that the best thing about the Vietnam War was that it allowed the United States to go to war without the American people having to be very bothered by it. I suppose that’s what’s happening here.  Twenty five years of war in the Middle East, including Yemen, that hardly anyone even knows about. And the American people just can’t be bothered with it.

Some terrible mistakes and terrible choices have been made by America in the post World War Two years.  This is our country and we are responsible for it.  I know that Washington is looked at by Americans as almost a separate country. But the rest of the world sees us as self-governing and therefore responsible.

One important thing that has been forgotten by America is that serving God is a privilege.  I’m afraid that privilege has been exchanged for order, comfort, and pleasure.

Netanyahu, tell the world the truth!