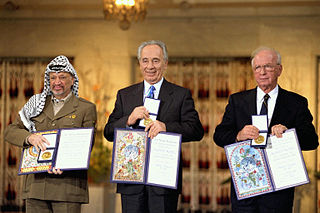 The Oslo Agreement of September 1993 represents a Machiavellian plot concocted by left-wing fools. The fools were headed by atheists led by Israel’s guru, Shimon Peres who hobnobbed with academics devoid of well-grounded Jewish convictions.

Conductor and engineer of the Oslo train

Peres had a willing collaborator Yitzchak Rabin, an arch secularist. In a clinical analysis of Rabin published in the March 1994 issue of Nativ: A Journal of Politics and the Arts, psychologist Netta Kohn Dor-Shav revealed certain pathonomic signs in Rabin’s character that rendered him a dubious if not dangerous prime minister.

Among the signs discussed by Dr. Dor-Shav was Rabin’s “megalomaniac” tendencies, especially his inordinate “self-reference.” This was abundantly confirmed on July 25, 1994 when President Bill Clinton, King Hussein, and Mr. Rabin offered toasts at a White House dinner celebrating the Israel-Jordan Declaration of Principles signed that day. In Clinton’s toast, the President used the first person “I” two times. King Hussein used the “I” ten times. Mr. Rabin used the “I” no less than 33 times!

The psychiatrist Max Nordau has shown that egoism and the academic doctrine of moral relativism reinforce each other. Rabin, who appointed the ultra-secularist Shulamit Aloni as his Minister of Education, scorned religious Jews as “parasites.”

Hence, it occurred to me that the driving purpose of the Rabin Government was to de-Judaize the State of Israel before its religious and prolific Jewish population became an electoral majority. Oslo thus appeared as a plot to curtail the ascendancy of Israel’s religious community. Benjamin Netanyahu is a knowing member of this plot, which is why he has persistently refused to abrogate Oslo and declare Jewish sovereignty over Judea and Samaria, despite the PLO’s ceaseless and countless murderous attacks on Jewish men, women, and children.

Whatever his other shortcomings, Netanyahu knows how to count. He knows that if Jewish sovereignty were declared over Judea and Samaria (J and S), which fully accords with international law as per the San Remo Convention of 1920 and the Anglo-American Treaty of 1925, this would greatly magnify the religious Jewish population of J and S. But then the representation of secular parties in the Knesset would plummet and curtail Netanyahu’s political career.

We may also assume that Netanyahu knows that the Anglo-American Treaty was ratified by the United States Senate. He must therefore know that this treaty, in America, is the Supreme Law of the Land. Moreover, if we exclude unforgivable ignorance, he must know that his endorsing a Palestinian state in this repossessed land of the Jewish people – repossessed according to the San Remo Convention – is nothing less than a violation of international law! (We need not add that this also renders him criminally suspect under international law as per the Anglo-American Treaty of 1925, since it, too, assigned all of Judea and Samaria to the Jewish People.

Now, as was obviously known to the architects of the two aforesaid international conventions, many thousands of Muslims reside in Judea and Samaria. Indeed, the seventieth anniversary of the San Remo Convention was celebrated at that location, and the celebration was attended by representatives of the United States, and even by MK Danny Danon, the Deputy Speaker of the Knesset. This celebratory event was surely known to MK Benjamin Netanyahu. Nevertheless, Mr. Netanyahu, on his own accord (i.e., without Knesset or public debate) and in direct contravention of the international laws or conventions specified in the previous paragraph, willfully endorsed the “two-state solution” to the Israel-Palestinian conflict!

Can it be that Prime Minister of Israel, by advocating the “two-state solution” committed a criminal act under international law (as per the San Remo convention)? This question may also be addressed to [former] President Barack Obama. However, in the case of Obama, his endorsing the establishment of a Palestinian state in the Land of Israel also constitutes, prime facie, a violation of the United States Constitution, since the Anglo-American Treaty of 1925, which assigns all of Judea and Samaria to the Jewish People, is the supreme law of the land, thus making any American affirmation of the “two-state solution” unconstitutional and null and void on its face!

This train of unlawfulness may be said to have begun with the Oslo or Israel-PLO Agreement of 1993. The legality of that agreement, in the context of international law, is dubious if only because the PLO Charter calls for the extermination of Israel, which renders it ipso facto illegal as per the UN Charter. There is no discernible end to this unlawfulness because clique after clique of Oslo-type of politicians dares not expose the unlawful acts of their predecessors lest the entire deck of Oslo cards collapses and Israel falls into unmitigated anarchy.

The prime ministers of Israel’s Government resemble Goethe’s sorcerer’s apprentice, a fool who started the Oslo train not knowing how to stop it.☼