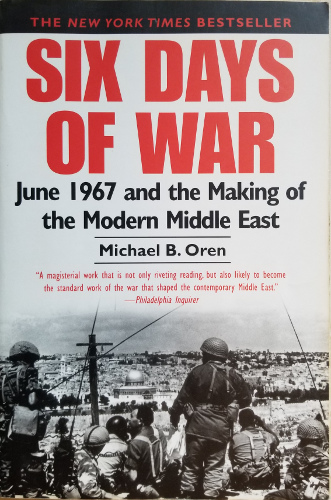 Six Days of War: June 1967 and the Making of the Modern Middle East. By Michael B. Oren, former Ambassador from Israel to the United States. New York: Presidio Press, 2002.

Israeli prime ministers are modest men. None seems to have ever harbored the ambition to make Israel a superpower (like Rome) despite Israel’s unrivaled military power.

Instead, these politicians have pursued the policy of “territory for peace,” which has truncated Israel by undoing the miracle of the Six Day War. As I have previously observed, they failed to translate that miracle into public policy – which would have made Israel a veritable superpower – the only way Israel can survive and thrive in the Middle East.

Accordingly, let’s examine historian Michael Oren’s book Six Days of War. He notes that on Day One, in little more than half an hour, the Israel Air Force destroyed 204 planes – half of Egypt’s air force!– while destroying six Egyptian air fields, four in Sinai and two in Egypt. Oren writes: “The Israelis were stunned. No one ever imagined that a single squadron could neutralize an entire air base.”

Oren turns to Day Two and quotes Col. Avraham Adan, who was “stupefied” while watching the rout and disorder of the Egyptian army. “You ride past burnt-out vehicles,” says Adan, “and suddenly you see this immense army, too numerous to count, spread out of a vast area as far as your eyes can see … It was not a pleasant feeling, seeing that gigantic enemy and realizing that you’re only a single battalion of tanks.”

Oren the secularist fails to recognize the miracle of Israel

Oren quotes Moshe Dayan, who was also astonished and “puzzled”: “Though Israel had gained command of the skies, Egypt’s cities were not bombed, and the Egyptian armored units at the front could have fought even without air support!” Oren then quotes Gen. Avraham Yoffe: “There was no planning before the war about what the army would do beyond the al-‘Arish-Jabal Libni axis, not even a discussion. Nobody believed that we could have accomplished so much and that the [Egyptian] collapse would be so swift.” Oren sees that generals were “stunned,” “stupefied,” had an “unpleasant feeling” about the magnitude of their victory, and saw what was happening as “mysterious.”

Surely Oren could have noted that religious people would regard all this as a miracle. He says nothing of this. Far be it for this secular historian to quote Leviticus 26:8: “Five of you shall chase away a hundred, and a hundred of you shall put ten thousand to flight …” History for Oren has no metaphysical significance. Nor does it have such significance for Israel’s secular prime ministers.

Conversely, serious belief in God’s providence in the Six-Day War would have prompted Israel’s Government to declare Jewish sovereignty over Judea, Samaria, Gaza, the Golan Heights and the Sinai. To fully appreciate this miracle, a brief survey of contemporary events – ignored by Oren – will show that Israel’s government could have created a “Greater Israel,” indeed, a superpower!

In any event, Israel’s stunning victory awakened Washington to Israel’s strategic value. That victory resulted in the closing of the Suez Canal to the Soviet Black Sea fleet! This important arm of the Soviet navy was then compelled to sail through the Straits of Gibraltar and around the Cape of Good Hope in order to project Soviet power along the east African littoral and in the Indian Ocean, the sea-lanes of oil tankers from the Persian Gulf. Israel’s superb air force could also help protect NATO’s southern flank in the eastern Mediterranean.

America needed a strong and stable ally in the volatile region of the Middle East. A miniature Israel, confined to its precarious 1949 armistice lines, could hardly serve this function. In a memorandum dated June 27, 1967, the U.S. Joint Chiefs of Staff recommended that Israel retain control of the Judean and Samarian mountain ridges overlooking its vulnerable population centers on the coastal plain, as well as control of Gaza, the Golan Heights, and a portion of the southern Sinai to secure Israel’s access to the Red Sea through the Strait of Tiran.

Viewed in this light, only a timid and unimaginative secular Government would fail to see the miraculous significance of Israel’s victory in the Six-Day War. Had the leadership of this Government had a stitch of Jewish learning and insight, it would have declared Jewish sovereignty over the land conquered by the Israel Defense Forces. But even a learned historian like Oren failed to entertain this scenario for his readers. Israel’s government was literally stupefied. It was so dumbfounded that, ten days after the war, the Government transmitted a proposal to Cairo and Damascus offering to return to the prewar borders for a peace agreement! Not a word of this from our secular historian!

No wonder so many people throughout the world are oblivious of the fact that Israel has valid legal claims to this land, apart from its having been regained in a war of self-defense. Jordan’s annexation of Judea and Samaria in 1950 was never recognized by any state except Pakistan and Britain. Egypt had no claim to Gaza (and its claim to the Sinai was dubious).

Jordan and Egypt had invested nothing in these desolate territories, which were occupied by diverse Arab clans – they’re now called “Palestinians” – which had no indigenous culture linked to this land. The presence of those Arabs would not have deterred statesmen who believed in God and possessed the courage of their convictions to extend Jewish law over Judea, Samaria, and Gaza.

Having failed to translate the miracle of the Six-Day War into Israel’s national policy and thereby sanctify God’s Name, it was inevitable that subsequent Israeli governments would undo that miracle. Israel can hardly be a superpower under the Oslo Agreement, which apparently entails the surrender of Gaza as well as Judea and Samaria including eastern Jerusalem and the Temple Mount. This timid policy has encouraged the ambition of Iran to conquer Israel via Hezbollah, the Party of God. What irony!

Now let’s consider the character of the Israeli prime ministers who pursued this contemptible policy:

It was as if Israeli generals-become-prime ministers had become the world’s leading patrons of terrorism! It seems all of them felt no abhorrence of the evil Israel had overcome. What had they been taught by their educators? Is it this that underlies Israel’s present plight?

Perhaps a Commission of National Inquiry should examine the curriculum of Israel’s Command and Staff School. The late Professor Harkabi was once the head of this school. He was not only a moral relativist who advocated a Palestinian state, but he sanctioned havlaga – self–restraint – as a guiding military principle! This principle restraint was employed by Rabin, Barak, and Sharon against Arab terrorists – and all of these generals advocated a Palestinian state! What’s going on here?

Probing deeper, the principle of self-restraint underlies the failure of Israeli governments to declare Jewish sovereignty over the land conquered by the IDF in the Six-Day War. Properly understood, self-restraint – a euphemism for the timidity of Israeli prime ministers – has brought Israel into a proxy war with Iran, a war for which Iran has been preparing for many years while Israeli prime ministers were burning incense to the peace process!☼

It Does Not Take A Village – It Takes An Adult