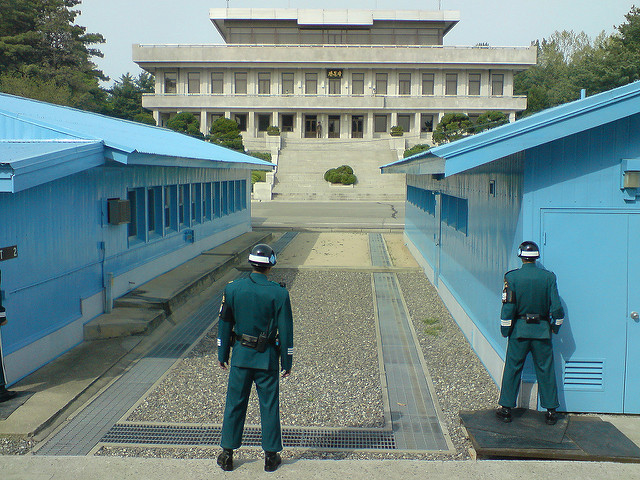 Hello, this is Darrell Castle with today’s Castle Report. Today I will be talking about the summit meeting held on June 12th between President Donald Trump and Chairman Kim Jong Un of North Korea. The two leaders met in Singapore and issued a joint statement of their agreement.

I will quote from the four points of the agreement as follows:

A meeting of equals

President Trump decided to relate to his adversary as an equal, which now seems like a good idea. He was criticized in the American press for recognizing Kim Jong Un as an equal by shaking his hand and sitting on the podium in equal status with him. But what was he supposed to do, refuse his hand? If he was expected to refuse the man’s hand, and perhaps turn his back, then what would be the point of the summit?

A reporter from Time Magazine asked the President if he now considered Kim Jong Un his equal and the President responded, “If I have to say I’m sitting on a stage with Chairman Kim and that’s going to get us to save 30 million lives—maybe more than that—I’m willing to sit on that stage. I’m willing to travel to Singapore very proudly, very gladly.” Now that’s a pretty good answer and will make it harder for the media to marginalize the meeting by saying that Kim won by having his picture taken with President Trump.

President Trump obviously decided to approach this summit with a different attitude than did the Clinton and Obama administrations. Those administrations and those Presidents basically just said look here’s 10 billion dollars, now tell us you will use it to buy food and then just shut up until I’m out of office.

An appeal to imagination

President Trump decided instead to establish a friendship with the man in order to accomplish something of lasting significance. Mr. Kim apparently has a reputation for liking movies, so President Trump had a video made to show him what North Korea could actually be like in an atmosphere of peace. It was a pretty good video. I watched it and I enjoyed it, and apparently Mr. Kim enjoyed watching it as well. The two leaders walked together for a while with their hands on each others’ backs as two friends would. Mr. Trump showed him something from the back of his car and others joined them to look at whatever it was.

Later, the President said that he advised Mr. Kim to look at it from a real estate standpoint. “We were standing on a beautiful beach and I told him that instead of exploding cannon shells to imagine condominiums and hotels and places for people to live.” He painted a picture for him in language they could both understand, of what life could really be like for his country if peace and prosperity could be found in their meeting.

Free market capitalism brings prosperity for the largest number of people and the President had an opportunity to show that fact to a communist dictator. The United States really lost nothing in this deal. If it works out that’s great, but if it doesn’t then negotiations can continue, and as the President pointed out, we didn’t have to transfer $150 billion dollars as we did in the Iran deal.

It took Dennis Rodman to really put it all into perspective though. The NBA hall of famer, former member of the bad boy Detroit Pistons had been to North Korea many times before at the bequest of Kim Jong Un, who Rodman said wanted to bring professional basketball to North Korea. Dennis said that he tried to tell President Obama that there was a real opportunity for peace and dialog but President Obama wouldn’t give him the time of day.

Dennis showed up at the press conference with a Make America Great Again Hat on and said “This is a great day for everybody! I’m just so happy to be here, man. It’s the world’s day!” He had tears streaming down his face as he told CNN about how Kim Jong Un asked him to relay a message to President Obama but the President wouldn’t give him the time of day. He said President Trump called through a secretary to tell him he was very proud of his efforts.

Dennis tweeted about his assessment of President Trump. “To all Americans and the rest of the world I’m honored to call POTUS a friend. He’s one of the best negotiators of all time and I’m looking forward to him adding to his historic success at the Singapore Summit.” He said he gave a copy of “The Art of The Deal” to a North Korean minister, asking that they read it before the summit.

The media and politicians on the left of course criticized the deal because they hate him so much that they apparently would rather risk nuclear war than admit that he accomplished something. Their hatred of him is actually hatred of all you folks out there in fly over country who voted for him, all 63 million of you.

It would be nice if we could at least come together as a country and recognize that America is better off because of this summit but that is just too much to ask.

The enlightenment has done its work it seems, at least as much of its work as is doable. It has done enough to completely invert the world order and the civilization that underpins it.

The oligarchs of the left are now the ones who disguise themselves as god, king, and law. The verses of Shelley, atheist and leftist after the French Revolution destroyed France come to mind. The Revolution in France turned the world order upside down much as the New Leftist atheistic order is doing today.

Why nervous in Norway?

What about the title of this Castle Report, Nervous in Norway? The Nobel Prize Committee meets in Oslo, Norway. It would be a safe bet that the committee is nervously hoping that something goes wrong with President Trump’s march to the Peace Prize. If Donald Trump does get the Noble Peace Prize he will have earned it, unlike his predecessor.

In point of fact, Donald Trump has two separate nominations now on file for the 2019 Nobel Prize for Peace. The first, according to ZeroHedge, came from 18 members of the House Republican Caucus on May 2, 2018.

The more recent and sensational nomination came from two Norwegian legislators. That report comes from Fortune, quoting Bloomberg, from June 13, 2018. These two lawmakers specifically cited Trump’s success in reaching a denuclearization agreement with North Korea. One of them—or one of their colleagues—said this to Norwegian television:

What’s going on now is historic. A process is underway to ensure world peace in the future. It’s a fragile process, but we must of course do what we can to help this process bring good results.

These two reports appear in this search result from DuckDuckGo.1

This result also has a report of an earlier Nobel Prize nomination in February of 2018. The New York Times swiftly reported that the Nobel Committee dismissed the nomination as a forgery. But the two nominations in May and June came after this forgery report, not before.

As the author of this article says, no wonder certain people are nervous in Norway.

1CNAV endorses DuckDuckGo as the most reliable search engine for genuine news. “Google” is not a verb, not at CNAV. (Nor is “Bing.”) Why the report of an attempt to forge a nomination for the Nobel Prize for Peace outranks two genuine nominations in this search result, CNAV will not speculate.

What has the Supreme Court done for conservatives?

Lying, spying, and propagandizing – oh my!