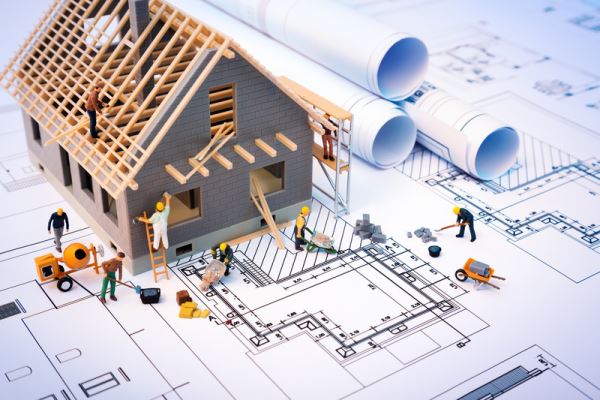 When the Constitutional Convention of 1787 found itself in gridlock, Benjamin Franklin urged his fellow delegates to pray daily “imploring the assistance of Heaven.” By which he meant the Lord. Franklin observed that:

We have been assured, Sir, in the Sacred Writings, that “except the Lord build the House, they labor in vain that build it.” [Psalm 127:1] I firmly believe this; and I also believe that without his concurring aid we shall succeed in this political building no better than the Builders of Babel.…

The Lord is still Real, even if His popularity has waned

The popularity of such religious sentiment may have waned in recent years, but the truth of God’s word, and the veracity of Mr. Franklin’s statement, remain unchanged. Labor expended on any house that is not of the Lord’s building is wasted effort that will not produce the desired results.

It should be understood that a house can indeed be built apart from the Lord and His counsels, but the resultant product will be unsuited to any Godly purposes that may have been intended, thus causing the labor to have been expended in vain.

The delegates to the Constitutional Convention had a specific purpose for which they were laboring. According to the preamble to the Constitution, they were laboring to “form a more perfect union, establish justice, insure domestic tranquility, provide for the common defense, promote the general welfare, and secure the blessings of liberty…” The delegates could have drafted a constitution without the Lord’s assistance through sheer compromise, arriving at the lowest common denominator. However, as Mr. Franklin was pointing out, had they chosen such a course, the labor expended over that constitution would have been in vain, i. e., unprofitable to the Godly purposes stated in the preamble.

Any endeavor seeking to establish a Godly purpose must build according to the Lord’s design.

The Lord as Builder

So, what exactly does it mean to let the Lord be the builder of the house?

Having the Lord as the builder of the house means looking to Him as the chief architect and master builder who designs the structure and prescribes the materials to be used and methods to be employed.

It’s like the relationship between a developer and the subcontractors he hires to do the work. The developer selects a building site, chooses the plans, and prescribes the materials to be used. The subcontractors provide the labor, but if their work, or the materials they use, are not in accordance with the specifications, it is rejected as unfit for the developer’s use – it is in vain.

When we build at our own volition, or by our own designs, guided by pragmatic reasoning or emotional feeling instead of by God’s word, wisdom, and Holy Spirit, we labor in vain, ending up with a human concoction unfit for the Master’s use and unprofitable to the Godly purpose intended.

The House the Right Built

Without a doubt, the conservative movement, and/or the Christian right, has built a substantial political house in the form of the Republican Party.

Like it or not, essentially all conservative activism ends up folding back into the Republican Party and its candidates as the ultimate repository of the hopes and endeavors of the right. From the Goldwater campaign of 1964, up through Jerry Falwell and the Moral Majority in the 1980s, the Republican Revolution of 1994, Bush Dynasty Part II in the early 2000s, the Tea Party movement, and now making American great through Donald Trump, the Christian-conservative-right has poured incalculable time and treasure into building the Republican house.

According to the Center for Responsive Politics, in 2016 alone, the Republican Party and its affiliated committees raised nearly $1 billion. And that doesn’t include the money donated directly to campaigns or funds spent in support of candidates by non-affiliated PACs. Since the time of Newt Gingrich’s “Contract With America,” when I first began to be politically active in the mid-90s, the conservative right has expended, at minimum, dozens, and quite probably hundreds of billions of dollars, along with untold millions of man-hours of labor, building the house of the favored political party.

That Republican house has indeed succeeded in seizing upon political power. From 1995 to the present, the Republican Party has held a 71 percent share of the control of the federal government (based on one point awarded to each party for each year it held control of either the House, Senate, Presidency, or Supreme Court). At the state level, since 2010, Republicans have held complete control (both houses of legislature and governor) in an average of 24 states, compared to only 9 for Democrats.

So, with the favored party holding overwhelming dominance in the federal government and able to implement any agenda it desires in half the states, the question is whether the outcome desired by the conservative movement has been realized.

Has the Labor Been in Vain?

When I walked into this political movie back in the mid-90s, the leading figures of original conservatism were championing traditional conservative policies such as:

So, having built a house of overwhelming political dominance, how many of these conservative objectives have now been achieved? Which items can we check off the list as completed?

Frankly, I’m not aware of anything on the original conservative agenda that has been truly or fully implemented anywhere, not even in the reddest of states counted as conservative strongholds and controlled by Rs for decades. There have been a few courageous legislators around the country who submit good bills, seeking to restore liberty and the rule of law, but those bills seem to get shot down, or at least watered down, by the Republican Party’s own leadership.

If vain means, “not yielding the desired outcome,” then it well describes the labor the right has invested in its preferred political party.

If failure to let the Lord build the house causes ones labor to be in vain, then perhaps vain labor is a sign that the Lord is not building the house. So, let’s consider some key elements in the Master’s plan that must be observed if we are to avoid laboring in vain.

Every political endeavor of the right must be established squarely upon, and built in accordance with, the revealed will of God in His word.

Whatever is not of faith is sin (Romans 14:23) and without faith, it is impossible to please God (Hebrews 11:6). God has commanded us dozens of times in scripture to “fear not,” as fear is actually perverted faith that is believing in the power of evil to harm us. That fear of evil is designed to intimidate us into backing down and compromising.

Whenever we let fear of one candidate or party drive us to compromise our professed values in order to support who or what the politicos tell us can save us from the object of our fears, then fear has done its job. The believer must act from a spirit of faith that says “God’s way is the right way and I will trust Him enough just to do what He says is right, no matter the perceived outcome.”

Love is the supreme law of the kingdom – the new commandment of the new covenant (John 13:34). We are not only commanded to love both our neighbor and our enemy (Matthew 5:43-44), but to forgive debtors (Matthew 6:12) and anyone that we have anything against for any reason (Mark 11:25).

It concerns me when Christians and conservatives mock, ridicule, and express contempt for their political opponents, speaking of them in derogatory terms and with a tone of anger, or even hate. If we do not forgive and let go of offenses, we cannot be forgiven (Mar 11:26). We cannot expect blessing on our endeavors if they are undertaken in a spirit that violates two of the prime directives of the kingdom.

The Lord Alone as Our Source and Strength

God is actually looking for people to “show Himself strong on behalf of” (2 Chronicles 16:9). Without His strength working on our behalf, our labors will most certainly be in vain. However, the Lord only shows Himself strong for those whose heart is “perfect” (KJV), “loyal” (NKJV), or “fully committed to him” (NLT). King Asa forfeited the Lord’s showing Himself strong on Judah’s behalf when he looked to the military might of Syria for strength, instead of looking to the Lord alone as his source (2 Chronicles 16:7-9).

It’s all right to work with, in, or through political organizations, but the minute we begin looking to a political entity, or power brokers, as the source of strength needed to prevail, we will begin to compromise, form allegiances with the wrong people, and, ultimately, forfeit the Lord’s showing Himself strong on our behalf. We must be fully committed to the Lord, alone, as our ultimate source.

The Rule of Law

While God is the sovereign – the highest in authority – the U. S. Constitution, and state constitutions, are indeed the law of the land under Him, insomuch as they are compatible with His revealed will. Anything that is not in conformity with these documents is, therefore, an act of lawlessness, as it violates the highest law of the land. While God does forgive lawlessness, we cannot expect Him to reward it.

In every question of political policy, we must adhere to the plain text and original intent of our constitutional forms of government, giving our support, and vote, only to those who uphold the Constitutional rule of law. To do otherwise makes us parties to lawlessness, which the Lord cannot honor.

I’m not willing to expend time, treasure, or hope on anything that is not looking to the Lord as the master builder, whose plans and prescriptions are being followed as the master plan.

Our job is not to obtain political power for God. Our job is to declare the counsels of His will to the inhabitants of the land, and to build only that which is fit for His use.

For no one can lay any foundation other than the one we already have—Jesus Christ. Anyone who builds on that foundation may use a variety of materials—gold, silver, jewels, wood, hay, or straw. But on the judgment day, fire will reveal what kind of work each builder has done. The fire will show if a person’s work has any value. If the work survives, that builder will receive a reward. But if the work is burned up, the builder will suffer great loss. The builder will be saved, but like someone barely escaping through a wall of flames.

Those attacking Donald Trump are not being prosecuted – they are being rewarded!