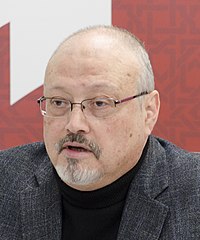 Hello this is Darrell Castle with today’s Castle Report. Today I will be talking about the death or at least the apparent death of journalist Jamal Khashoggi. I call him journalist because that is what he was and had been since the 1970’s an internationally prominent journalist.. Let’s take a look today at who else this man Jamal Khashoggi really was.

Journalist and propagandist both

Mr. Khashoggi fled to the United States and Great Britain after writing articles critical of the Saudi Regime especially new Crown Prince Mohammed bin Salman. He obviously knew that if he ever set foot in Saudi Arabia again he would be killed or spend the rest of his life in a Saudi prison. The new Crown Prince apparently has no qualms whatsoever about using violence against his political enemies. However, I’ve heard it said that Love conquers all. Mr. Khashoggi apparently fell in love because he made an appearance at the Saudi Consulate in Istanbul Turkey, in order to divorce his Saudi wife and marry his Turkish girlfriend. After he walked into the consulate he was never seen again.

This man wore more hats than just internationally famous journalist and writer for The Washington Post. He was a member of the Muslim Brotherhood and a lifelong friend of Osama bin Laden. Part of his role as a journalist was to serve as the propagandist and apologist for the terror groups Hamas and al Qaida. His fiancée waited outside the consulate for him as he was completing the paperwork but he never came to her so she called the police.

The Saudis at the consulate claimed they did not know what happened to him. Back in Saudi Arabia Crown Prince bin Salman insisted that Khashoggi left shortly after completing his paperwork. President Trump called King Salman and was told that the Crown Prince was in charge of the investigation and the Prince said we had nothing to do with it. So, the King of Saudi Arabia puts the main suspect in a murder in charge of the investigation of that murder but that is just one of the bizarre plot twists in this case.

The Saudis have since changed their story back and forth several times but have settled on a version that has him dying during an “interrogation” gone wrong. The Turks, of course, have a different view of things. They say that on that same day, October 2, fifteen Saudis arrived in Istanbul in the morning and left on two different flights that same evening. The Turks produced videotapes of the fifteen Saudis arriving at the airport but close investigation revealed that some of the tapes were five years old. The Turks say they have proof that he was killed inside the consulate. Their proof includes tapes which prove at least by audio that he was killed there.

They say that his voice is clear on the tapes along with the voices of men speaking Arabic. They say you can hear how he was interrogated, tortured and murdered, at least that is the story given to the Washington Post. The Turks further claim that his body was dismembered by a bone saw and somehow transported out of the consulate I suppose by the fifteen Saudis. Perhaps they put his pieces in diplomatic pouches and took him back to Riyadh.

Now however, there are reports that his body has been discovered in pieces buried in the garden of the consul general. The Turks needed Saudi permission to enter the Saudi consulate and search but the Crown Prince had little choice but to give permission. It appears that this body parts discovery is true and if so the Prince will have difficulty separating himself from it and that makes president Trump’s position even more tenuous. Surveillance video also shows a Saudi body double leaving in Khashoggi’s clothes after he was killed. So in this version of the event the Saudi’s included in the fifteen, one who closely resembled the victim so they could show footage of him leaving the consulate and then say “see we did not kill him because he’s not even dead.”

Issues beyond the death of one journalist

It’s all too bizarre and impossible to know, at this point, what really happened but let’s take at look at some really important issues in this case that are a little more clear and that is what if any effect has this had on the relations between the United States and Saudi Arabia.

It’s probably because of their vast oil reserves and the resulting vast wealth but the Kingdom has always shown contempt for what the rest of the world thinks. This incident serves to reinforce the view that Saudi Arabia has no intention of changing its ways no matter what the world thinks. President Trump has promised “severe punishment” if it is proven that the Saudis actually killed Khashoggi but the Crown Prince is not showing any fear and is not giving in to the international efforts to intimidate him.

The Prince has his annual, Davos in the Desert, conference scheduled for early November but scores of heads of various corporations who were confirmed to attend have pulled out because of the Khashoggi affair. If these companies want to lose billions for not investing and for not accepting Saudi money he says he is OK with that and will make the effort to look more seriously at the money the Chinese have been offering. He further says that if the severe punishment President Trump mentioned occurs he will force oil prices up to $400 per barrel and seek an alliance with Russia and possibly even Iran. The rumors are that he has already received 50 billion in orders before the conference is even held so no wonder if he is not intimidated by threats.

This American alliance with the Saudis which now means with the Crown Prince is supposed to benefit both sides, but it puts President Trump in a very difficult situation. He is trying to squeeze Iran in order to bring them seriously to the bargaining table or to institute regime change against the Mullahs, but he needs Saudi cooperation in order to do that. He has said that he will impose such crippling sanctions against Iran next month that it will be impossible for them to sell their oil on the international market. If US fuel prices are to be kept stable the President needs Saudi Arabia to fill the lost production for the international market.

The Saudis, don’t forget, were sixteen of the nineteen 9-11 hijackers and they were protected from scrutiny by the American intelligence services and media. Through all the destruction and death, the Saudis remained our friend and ally. They have always been the swing oil producer but have refused us any favors except to sell to us at market prices. When it is in their interest to do so, they raise or lower prices to meet their needs, not ours. Their traditional oil dominance of the market is threatened now by American fracking technology and they must respect that in decision making.

Today the Saudis are fighting a war in Yemen with American supplied weapons including advanced aircraft and bombs. They are reported to be indiscriminate in their bombing of civilian targets and many thousands have been killed including women and especially children. Every bomb that falls and every bullet that flies has made in America stamped on it and everybody in the Middle East knows it, but apparently very few Americans know or care.

The major reason for the United States support of the Saudi tactics in the Yemani war is that it is basically a proxy war against Iran. The rebels in Yemen are being supplied by Iran and so Iran and Saudi Arabia are fighting a war on Yemen’s people right on the border of Saudi Arabia.

The Crown Prince was going to bring major change to the kingdom we thought. Women can drive now and the cinemas, closed since 1979, have reopened all thanks to the Crown Prince. We have talked before about his plans to build modern cities in the desert and his courting of technology for artificial intelligence for advanced robotics. However, this all may be a well cultivated image created for the Western press. The Saudis will certainly do whatever it takes to keep them in power and protect their massive wealth for the benefit of the fifteen thousand member Saudi royal family.

What is his story?

Khashoggi was not a member of the royal Family but he has been a leading international journalist since the 1970’s. The media community around the world is not one that it is wise to run afoul of for obvious reasons especially when you are courting their attention. Mr. Khashoggi has long and respected credentials as a journalist but he was reportedly banned from publishing or appearing on television in Saudi Arabia which led to his move to the United States and his association with The Washington Post.

In the West he is hailed as a progressive especially with his Washington Post credentials but his actual work and history are far different. He believed in spreading Sharia rule but by political, not violent means. Except for his disclaiming violence, he had the same goals as any Jihadist that is to spread Sharia Muslim rule across the world.

When does an alliance become unprofitable?

Finally folks, the Saudi Regime does what it does while being protected and supplied by the United States military. What would the Saud family have to do in order to provoke the end of their American Alliance? Would attacking the United States and killing its citizens be enough, obviously not? What if they established thousands of radical Wahabbi mosques to teach terror tactics across the United States, no I’m afraid not? How about manipulating the price of oil up or down to suit itself and damage the American economy, no obviously that’s not enough. How about if they conducted a war in Yemen which resulted in thousands of civilian deaths from bombs, disease and starvation, no obviously not enough?

Well then how about the death of one man, one journalist, yes, maybe that particular man is enough.

Dead Jews — What Else is New?

Created Opposition Will Be Blamed – But They Are The Ones Doing The Attacking!