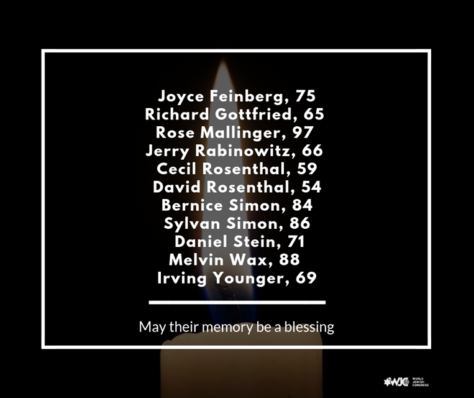 This past Saturday morning, 11 Jews were shot to death in a Pittsburgh synagogue by one of the millions of Jew haters who contaminate our world.

To Jews like me, who know and appreciate Jewish history as I do, this is no surprise. Tragic, yes; shocking, no.

We are a tiny, indeed microscopic, people, only 15 million in a world of nearly eight billion. That ratio equals the proverbial grain of sand on the vast beaches of life, only one drop in the immense oceans that cover most of our globe.

But Jew hatred is very powerful, written about in thousands of books and articles by erudite scholars who posit theories ranging from resentment that God selected Jews as his “chosen people” to the myth that the Jews killed Jesus to the accusation that Jews are either greedy capitalists or cruel communists to the grievance that Jews run the world.

My own take is that when you peel back every layer of the onion of anti-Semitism, the root cause is that the anti-Semites among us are obsessively jealous. How can it be, they wonder, that this tiny people, dispersed in a diaspora for the last 5,000 years to far-flung communities all over the world where they landed with no language skills, no money, no resources, no nothing––and in the process survived the Jew-targeting Inquisition, Crusades, pogroms. Concentration camps and pandemic outbreaks of anti-Semitism––managed to flourish and rise to prominence wherever they went?

Here in America, we have living proof that the green-eyed monster is alive and well, Exhibit No. One being the execrable “Reverend” Louis Farrakhan––one of Barack Obama’s buds––who little more than a week ago spoke before a smiling, nodding, applauding audience as he called Jews “termites” and “stupid.”

Did I mention his glowing admiration for Hitler? “The Jews don’t like Farrakhan,” he said some years ago, “so they call me Hitler. Well, that’s a good name. Hitler was a very great man.” Last May, this Nation of Islam leader––who has been manically obsessed with Jews his entire life––spoke of “Satanic Jews who have infected the whole world with poison and deceit.”

No need to continue to question what could possibly have provoked the Pittsburgh mass murderer, Robert Bowers, to go on his Jew-hating rampage. Is there any doubt that it was Mr. Farrakhan, as well as the violence-promoting rhetoric of leftist Democrats such as:

This is the short list and the media know all this but steadfastly fail to cover it because of their rosy-eyed infatuation with all things diverse and multicultural, their hard-left bias––and, of course, all things anti-Trump. The idea of actually broadcasting Mr. Farrakhan’s racist rants and Jew hatred going back decades, as well as the provocative and inflammatory outbursts of the other Democrats I mentioned, is unimaginable to the hard leftists of the American media because their bosses are so heavily invested in the global economy. It is always about following the money!

In the saga of contemporary anti-Semitism, Mr. Farrakhan is not alone. In fact, I believe the fulminating resurgence of anti-Semitism in the United States is a direct result of Barack Obama’s influence, which persisted for the entire eight years––2009-2016––he occupied the Oval Office.

As we now know, President Trump has not yet purged the government of all the seditious and even treasonous operatives left over from the Obama regime.

According to journalist Mona Charen, Mr. Obama had a “genocidal hostility toward Israel.” Here is the very short list of those he surrounded himself with (you can look up each person’s decades-long antagonism, in words and deeds, to Israel––meaning Jews).

The court Jews in the Obama administration

And that is not to omit Mr. Obama’s “court Jews,” who like past lackeys financed, supported, licked the boots of and sold out the Jewish people in order to gain the personal influence, privileges, wealth, and protection that the “nobles” afforded them. They helped Roman emperors kill Jews. They helped Hitler kill Jews. But after their groveling and traitorous service, they were blamed for economic downturns and used as scapegoats to explain away the failures of the evil regimes and leaders they abetted. Fools and dupes, to a person! They included:

Rahm Emanuel, White House Chief of Staff; David Axelrod, chief strategist and media advisor for Obama’s 2008 presidential campaign and White House insider; Robert Malley, a fan of Hamas and Hezbollah and son Simon Malley, an Egyptian-born Jewish journalist, and Barbara Silverstein, a New Yorker who worked for the U.N. delegation of the Algerian National Liberation Front, both of whom loathed Israel and apparently passed their toxic DNA onto their son; Dennis Ross, Mr. Obama’s special adviser for the Persian Gulf and Southwest Asia, which included Iran, who participated in 12 years of failed Israeli-Palestinian “peace” efforts; George Soros, the Budapest-born multibillionaire and Nazi collaborator who is also devoted to vilifying Israel and funding numerous groups that work unstintingly to bring about its destruction. Soros also has ties to numerous news outlets—including The New York Times, The Washington Post, Associated Press, NBC, ABC, et al.

Fruit of the poisonous Democrat tree

Self-described “Palestinian”-American Linda Sarsour, principal organizer of the “pussy hat” Women’s March on Washington, avid supporter of BDS, supporter of the incarcerated Palestinian Islamic Jihad member Muhammad Allan, a known recruiter of suicide bombers, supporter of Sharia law, and firmly opposed to Israel as a Jewish state….you get the picture.

Alexandria Ocasio-Cortez, (D-NY) who won a stunning primary victory over 10-term NY Congressman Joseph Crowley, and who Democratic National Committee Chairman Tom Perez called “the future of our party,” called Israel’s killing of 60 terrorist “protesters” in May a “massacre.”

Senator Cory Booker (D-NJ), according to Daniel Greenfield, is an ardent admirer of former Black Panther and Hitler admirer Stokely Carmichael (better known as Kwame Ture), and quotes him often on the flaws in the U.S. Constitution. “When Sen. Booker casually quotes a violent anti-Semitic racist, there’s a serious racism problem,” Greenfield says. “As the senator brings his hatred for the Jewish State to the Senate, he should be asked whether he agrees with his hero, “The only good Zionist is a dead Zionist…we must take a lesson from Hitler.” Oh, and Mr. Booker also voted against the Taylor Force Act that cut off funding for the Palestinians while they subsidize terrorists and their families.

According to pro-America, pro-Israel warrior Pamela Geller (www.pamelageller.com), the Democrat Congressional Committee Chair Rep. Ben Ray refuses to withdraw support for these anti-Semitic candidates, as well as for the following candidates:

Democrat Ilhan Omar who is running for Congress in Minnesota. She recently claimed that she hoped Allah would awaken people to “the evil doings of Israel,” and vilified “the apartheid Israeli regime.” And she also defended nine men who sought to join ISIS.

Andre Carson (D-IN), running for his second term as Congressman, has been a speaker at numerous pro-jihad conferences and terror-tied Muslims have given him generous donations. CAIR proudly lists Carsonon their website, along with Keith Ellison and many other Democrats.

Democrat Rashida Tlaib (MI) wants to be the first Muslim woman in Congress and supports Rasmea Odeh, convicted of murdering two American students in a Jerusalem bomb attack. Tlaib has also supported Islamic Relief, a group linked to the Muslim Brotherhood and designated as a terrorist organization by the United Arab Emirates.

Democrat candidate for Congress Scott Wallace (PA) was criticized after it was found that his charitable foundation had given >hundreds of thousands of dollars to groups that promote the BDS campaign. And in a recent debate––in a synagogue, no less––he told his Republican opponent, Rep. Brian Fitzpatrick, to “f—k off.”

Leslie Cockburn (D-VA) was accused by the Virginia GOP of being a “virulent anti-Semite,” based on her-co-authorship of Dangerous Liaison: The Inside Story of the U.S.-Israeli Covert Relationship, a book that “advocated for the inherently anti-Semitic belief that Israel controls America’s foreign policy.”

Perhaps the worst is Senator Kristen Gillibrand (D-NY), appointed for her first term and now running for her second six-year term in a state that boasts the second largest Jewish population in the world. But the formerly pro-gun, pro-life political conservative from upstate New York now supports the virulently anti-Semitic, Sharia-law-defending Linda Sarsour, who has stated publicly that Gillibrand “works for us on the inside.” Gillibrand also supports the “Israel Anti-Boycott Act,” which opposes the anti-Semitic Boycott, Divestment, Sanctions movement targeting Israel. And she voted for the nuclear deal with Iran––a state of fanatical anti-Semitism which vows every day to wipe Israel off the map and kill every Jew who walks the earth.

How any Jew can vote for this anti-Israel senator is incomprehensible to me.

And here is what the lovely Missouri State Senate Democrat, Maria Chappelle Nadal, had said: “I hope Trump is assassinated,” and “Police are pigs.”

If you don’t want rabid racists, anti-semites, tax-raisers, and open-border fanatics to run our country, don’t vote for any Democrat! They all hate the fact that President Trump has helped our economy soar into the stratosphere, boosted employment for blacks, Hispanics, youth, and women to all-time highs, strengthened our military ten times over, the list of wins goes on and on.

Or, vote for the party of Jew hatred, high taxes, a weak military, and the kind of toxic racism that belonged more in the Jim Crow era than in 2018 and beyond. Holy Mackerel….what a simple choice!

What is the real purpose of the United Nations?