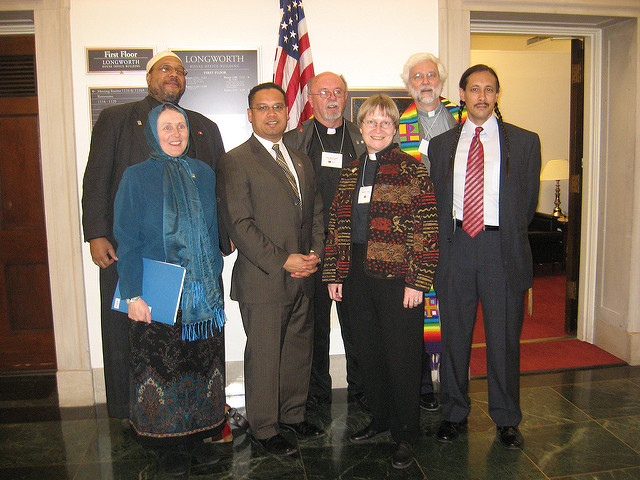 I would like to believe that these left-leaning clergy — rabbis, ministers, and imams — had good intentions, joining together to meet the caravan of migrants and provide them with food, clothing and solace. But their logic is deeply flawed. Whatever their intent, it is unconscionable and immoral for them to presume that they have the authority to offer the United States of America, home to more than 325.7 million American citizens, to any foreign hordes. In breaking the law, they are setting themselves above the law, which is something expressly forbidden in Judaism and Christianity.

Some of the rabbis used the Holocaust as false justification for the men’s trek to the north (95% of the lot are men), but theirs is a misplaced spirit of humanitarianism. They have drawn an unsuitable equivalence between the European Jews who were forced to flee their homes in fear for their lives with the Central Americans who were lured by the promise of welfare.

This sense of social justice is peculiarly selective, inasmuch as the rabbis were silent when “Palestinian” youths were propelling incendiary kites and balloons over Israel for more than a half year, burning thousands of acres of precious land and life; silent during these years of firing rockets and mortars into Israel, killing, crippling, and destroying; silent when Jews are attacked on the streets of Israel, France, Sweden, and Brooklyn; and silent when jihada and anti-Semite, Linda Sarsour, rants her hatred against Jews and President Trump. Heck, they didn’t even show up to support the establishment of the US Embassy in Jerusalem, yet they managed to arise in support of an invasion into America by unknown, lawless thousands!

The clergy guide an invasion

The leftist clerics are not entitled to overlook the possibilities that this migration is no different from the present-day Islamic migration (hijra) into Europe, creating havoc with their acts of rape, violence and destruction, bent on conquest by population. We know that Bartolo Fuentes, former Honduran congressman and one of the marches’ coordinators, established the caravan on March 12, 2017, and the small number grew to thousands as they passed through Guatemala, El Salvador, and Mexico. We cannot wait for recognizable uniforms, tanks, bazookas and cannons before calling it a threat. The firing pin has been pulled, the gun powder ignited, and these are the “bullets,” which, by their sheer number, are meant to be the overpowering human projectiles – and now guided by a misguided clergy.

Mexico was not able to stop these bullets, and her offer of asylum was rebuffed, proving that the marchers are not really seeking sanctuary. Mexicans agree with our President Trump, that this is an invasion, a “tsunami,” as the intruders continue north, waving their own flags and burning our Stars and Stripes – surely a sign of disrespect and haughty bravado, not humility.

Further, the hordes have shown their ingratitude by rejecting our food offerings, saying the meals are not “fit for pigs.” Such behavior, which expresses no appreciation or veneration for our country, warrants no compassion. What it does warrant is our understanding that they are not the “tired, poor, hungry masses.” They have thus far been well fed, clothed, and tended along their journey by socio-political progressives and the United Nations. If permitted entry, our shifting population would throw us into economic turmoil, with more taxes imposed on the middle class to pay for the non-working poor. Once again, this is the redistribution of wealth, the goal of “global justice,” such as fueled by the Occupy movements of 2011, and the heavy taxation and unemployment of the Obama years.

If not for President Trump’s strong support for our military and police forces that had been allowed to deteriorate during the “eight years,” we would now be in the throes of invasion, no borders, no sovereignty, and in rampant chaos. These clerics may well be of the same academic era that continues to weaken our male students, to intentionally destabilize our country, to have kept them ignorant of our history and what it took to establish these United States. They may not understand the goals of Progressivism/Communism and Islamism, but naïveté is inexcusable in leadership positions. If they are even partly responsible for the potential of unbridled disaster to our nation, they will have blood on their hands – and they would also succumb.

This is like no war we have ever fought. It is global as well as within our nation. The tactics differ as do the levels of progression and intensity, but the war is a certainty. How it is allowed to escalate is still up to us.

The Forerunners of the American Revolution: The Black Robed Regiment

Great article. “Moral equivalency” is a phrase which can be more specifically defined as trying to mix totally incompatible belief systems and expecting something good to come of it. In reality, one belief system will always be dominant. Islam is the one wearing the sheepskin to hide its glistening fangs. It is the deceptive wolf with a plan to eat the rest of them. The foolish “clergy” are really apostate Christians and Jews who have rejected sound biblical teachings and have embraced the Tower of Babel/United Nations secular humanism within an ecumenical framework as their worldview. In other words, they embrace all the things which scripture declares that God HATES. They have rejected the ultimate source of truth, thus they lack discernment to recognize that one among their number has mutton on the menu.