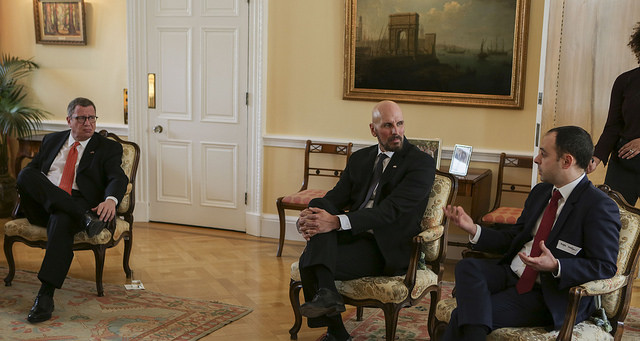 Consider the following scenario. A murder investigation is underway to determine the identity of the shooter. The detective questioning the suspect accuses him of shooting the woman he robbed. The suspect indignantly retorts, “But she wouldn’t give me her purse!!” What?!? The robber is blaming the victim because she refused to give him what he wanted! The victimizer is rationalizing his behavior and misrepresents himself as the victim.

The facts of this case are not in dispute – the suspect admits he shot the woman he was robbing. It is the interpretation of those facts that are being disputed – who is to blame – victim or victimizer?

Blaming the victim tests the sanity of society

In a sane society the shooter is blamed for the murder and is held criminally responsible. In today’s upside down world of Leftist Democrat identity politics, society accepts the shooter’s interpretation and the victim is being blamed for not surrendering to the demands of the victimizer. The perpetrator has been allowed to frame the argument.

The escalating anti-semitism in Europe and America illustrates the same operating principle of blaming the victim where the perpetrators are being allowed to frame the argument. This is how it works.

Blaming the victim: a recent example

Ms. Siniora begins her address with a lofty self-aggrandizing introduction to frame the argument:

Good morning. Today, I speak in my capacity as the General Director of the Women’s Centre for Legal Aid and Counselling (WCLAC). I also speak on behalf of the NGO Working Group on Women, Peace and Security. I speak to you as a peace leader and as a human rights defender who has witnessed, documented, and spoken out about violations in the Occupied Palestinian Territory for three decades.

The body of Siniora’s 1500 word speech typifies the deliberate worldwide effort to demonize Israel. The incessant repetition of lies, distortions, and blaming Jews for Arab violence defines the current echo chamber that is propagandizing adults on the Internet and indoctrinating children in schools worldwide.

It is Hitler’s old tried and true political strategy – if you tell a lie big enough and long enough it will be believed as the truth.

Propaganda is a far more powerful tool than bullets in Western societies. Ever since oil was discovered in Saudi Arabia the greedy West has allowed itself to be propagandized by the anti-semitic Jew hatred of the Arab world. Politicians were bribed, university chairs were bought, Internet behemoths began curating/censoring content, and pro-Arab policies became normative resulting in sharia compliant anti-semites serving in public office.

We live in a 21st century digital world that is indoctrinating the public to blame the victim and believe that the Jews are the problem. Rational arguments and documented facts are not persuasive to those who embrace their political self-interest with emotional religious zeal. The anti-semitic echo chamber in Nazi Germany transformed a sovereign country into a killing machine. Today, the United Nations represents a worldwide anti-semitic echo chamber united against Israel. The United States and Israel are powerful sovereign nations and formidable obstacles in the globalist campaign for one world government.

We are now at a global tipping point. The liberal Leftist Democrats in the United States and the ultra-left Labor party in England have been exposed for embracing the anti-semitic lies of the echo chamber. The Leftist leaders will collapse their countries’ economies if they gain power and will blame the Jews for the collapse.

It is not enough for rational people to shake their heads confused by how it is possible for lies, inconsistencies, and distortions to be believed. They must fight back by exposing the deliberateness of the propaganda effort to blame the Jews and recognize that anti-semitism is a galvanizing political tool. The lying echo chamber that promotes the Boycott Divestment and Sanctions (BDS) movement and supports Ms. Siniora is the same lying echo chamber that facilitated Obama’s catastrophic anti-American anti-semitic Iran deal.

The Constitution of the United States has been America’s enduring, non-partisan, foundational document guaranteeing our individual rights and freedoms for 242 years. Leftist Democrats are seeking to transform our Constitution into a living breathing document that will reflect their partisan political aspirations. This partisan transformation will allow the institutionalization of anti-semitism and legalize its blame the victim infrastructure.

It is essential to recognize that masses of illegal immigrants bring anti-semitism with them when they cross the border. Population shifting and forced illegal immigration is a political strategy designed to collapse the economies and sovereignty of Western nations in preparation for one world government.

Like Hitler in the 1930s, Leftist leaders here and abroad are using the unifying tool of anti-semitism to gain partisan power and control over their respective governments. They have embraced the Islamists and Globalists in a bizarre alliance of common cause.

Here is the problem.

The United States Navy and the New Silk Road

Which is standard for Islam – the victim is responsible.