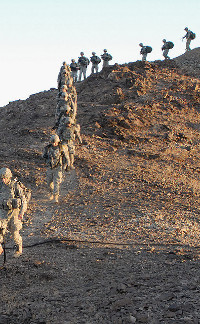 “A great civilization is not conquered from without until it has destroyed itself from within.” – Ariel Durant, Russian-born American researcher and writer, co-author of The Story of Civilization, Pulitzer Prize winner for general non-fiction. (1898-1981)

Components of a slaving system

While the United Nations agreed to flood Western nations with thousands of strong, able-bodied young men to overwhelm our security forces, our healthcare system, and our finances to feed, clothe and house them, there is yet another way to reduce our ability to deal with the invasion. The system began some time ago, and although we cannot be certain that this was their end game, it is certainly another method of realizing the left’s aspiration of globalism. It is time to gather the many components.

The Women’s movement began with the right to vote in the 19th and 20th centuries, evolving into every facet of their lives in the ‘60s,– sexuality, family, and work. The National Women’s Studies Association (NWSA), established in 1977, focused on social transformation, rethinking gender, bio-politics of humanity, post-capitalism, revolutions and utopian projects, environmental justice, climate change, and more. Often repackaged, we see these concepts increasingly governing our schools today, disturbing trends for today’s students.

Beginning with kindergarten, many American and European schools have implemented programs to discourage “best friends,” to keep the youngsters more isolated and lonely, including relinquishing human interaction for computer hours. Common Core’s standards redefine the teachers as facilitators who are less involved with actual instruction, and disdain objective truth for the subjective opinions of the students. Students despair through the lack of a solid foundation of academic and personal skills.

Common Core standards owes its implementation to its architect, David Coleman, who has no background in academia; Barack Hussein Obama; Bill Ayers, leader of the ‘60s counterculture movement, domestic terrorist and elementary education theorist; and Arne Duncan, later US Secretary of Education. Their philosophy was education for a revolution. Simple math emerged as extensive, frustrating mathematical problems. Classical literature, considered responsible for improving vocabulary, creative thought and expression, was replaced with dystopian writings and corporate texts, peppered with leftist ideology and resulting in contempt for reading.

World religion became historical revisionism, omissions, and bias devoted to Islam with intrinsic Judeophobia. Texts and schoolbooks depict Americans as colonialists, conquerors, and slavers, and the presentation of our founding fathers, the Constitution, Bill of Rights, and the Emancipation Proclamation, leave our children humiliated about their heritage, angry and eager to destroy historic statuary and monuments. The result is an intense anxiety in our children, fear of school, anger, sleeplessness, bed-wetting, and even self-mutilation.

The blind acceptance of a foreign element that rejects our American values is yet another threat to our students. The implementation of the concept of diversity actually divided the children who were once only American students striving for an education. Rather, the mirage of diversity has separated the students by race, heritage, gender; assimilation has been replaced by confrontation. No longer are they judged by achievements and grades, but by skin color and ethnicity.

The buzz word, ”equality,” is now applied to outcome, rather than to opportunity, so that standards must be lowered to provide all with an equal comfort level. Thus, leading universities began to establish a quota system based on group identity instead of on individual ability, encouraging diversity but using it to separate one from another, pit one against the other, and diminish the importance of the camaraderie and commonality of the school experience and Americanism. This is social engineering – denying this generation the aptitude and intellect to discern fact from fiction, right from wrong.

Another injustice ensued when young women were blaming chauvinism for the jobs they did not land, forcing companies to make the necessary hiring accommodations by gender and ethnicity, rather than talent and ability, a palpable problem in medicine and other fields. Such was the case of the Obama-era FAA hiring rules that placed air traffic controller diversity ahead of safety.

Deprecation and disrespect for men

Men were now not succeeding as their fathers had, not able to support their families if they married, and often not marrying because the young women are managing well enough with socialist welfare checks. The fathers are pushed to abandon what should have been their new family.

Many young women in school have been imbued with a disrespect, even contempt, for men, particularly white men, which vilifies our history and suppresses a flourishing civilization. It was certainly evident with the confirmation hearings of Supreme Court Justice Brett Kavanaugh, when women were seen screaming and pounding on locked doors, willingly charging him with unproven crimes. Further, the assault on free speech gives credence to silencing anyone with the accusation of “hate speech,” or “behavioral transgressions.” Boys and young men who, through the ages, have been the ones to initiate courtship are now deterred because of potential accusations of offensive speech or aggression. Many universities now employ a Bias Hotline, where anyone may report any conduct or speech seen as offensive, intimidating, demeaning, degrading, marginalizing, victimizing or threatening to another individual. The victim could be fined, suspended, or even dismissed from the school.

Another depreciating and seriously damaging influence is the schools’ indoctrinating young children to accept transgenderism, replacing our pronouns for two genders with an appalling variety of choices, so that teachers may be fired if they accidentally lapse into the God-given two. Nontraditional families and cross-dressing are also approved. Boys who have always been acclaimed for healthy masculine traits that enable them to succeed in our military and police forces may now be subjected to ridicule, harassment and shame by the teacher. Is it any wonder that the suicide rate for boys is four times higher than that of girls?

And finally (or is it?), citing evidence that boys have become maladjusted, low achievers, truants and delinquents, inattentive and rebellious, depressed and desperate, with a shorter life expectancy, Brown University has implemented a program to “unlearn toxic masculinity,” which can only further emasculate boys. Rather than analyze society’s role in weakening and devaluing them, robbing them of their natural maleness and function, this university has chosen to hasten the process. And can I even find the words to discuss the leftist assault on our sanity, as they declare that boys can menstruate? We recognize the strategies, but what lies behind this war against our male population?

The power hungry who seek to rule the globe as one governing entity, globalists, (including our own Shadow Government) or caliphates, do not have the manpower and defense technology to overcome our population, our citizens’ abilities and spirit, so that other means would have to be found. The only course open to globalists is to overwhelm Americans with an alien population; hence, we are being beset by the migrant masses and determined opposition to the border wall for protection. Another would be to weaken America as President Obama depleted our military by spending down and sending ~$33.6 billion to Iran, reducing our armed services and allowing equipment to age without replacement, and denigrating our police.

The strategy of weakening America’s manpower is being implemented in order to ensure that our youth, our future military, remain uninspired, untrained, and emasculated. It would appear that they are being converted into a non-reasoning, obedient, slave sect, a modern-day form of Pharaoh’s eunuchs. Then, should enemy forces advance, there would be few true men left to do battle for our existence.

The betrayal of America: whom do you trust?

Standing with Good Government in Striking Down the Corrupt Tree: Obamacare