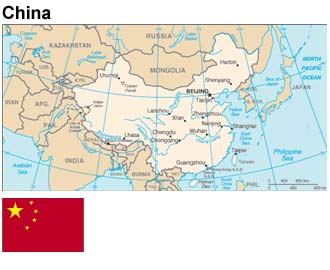 China then and now

For much of America’s historic years of friendship with China, that country was an impoverished third world backwater looking for allies in its struggles. But the two countries once stood together against common foes. When the United States naval base at Pearl Harbor Hawaii was attacked on December 7, 1941 the Chinese had already been fighting the Japanese Empire for 10 years. The two nations faced a common foe together.

After World War ll China changed from a primitive third world country to a primitive, communist third world country. Mao’s Cultural Revolution brought with it the death of millions of China’s intellectuals and peasants who were suspect or somehow did not fit the communist ideal. Instead of its historic friendship with America, China had the collectivist idea of communism and that ideology dictates that all communist nations work together for the defeat of the West and the triumph of international communism. That’s why the communists used to constantly refer to each other as comrade since the idea of individualism was hateful to communists.

President Nixon and Henry Kissinger changed much of that with their trip to china in the early 1970’s and with Mao’s death in 1976 the Cultural Revolution also died. China started to change as its potential and its failures became more and more obvious. The new China was more likely to act individually in its own best interest and as a competitor in trade with other countries of the world whether communist or not. In about 43 years since Mao’s death China has made itself into a powerful economy capable of challenging the United States on many levels.

Most of the progress and the results of that progress are obvious for anyone to see if they look at it. China is close to the United States in super computers and in other areas of science such as genetic engineering and genomics. Unfortunately China does not have a history of the significance of the individual Chinese that America once had of the individual American. Furthermore, as a result, the genetic engineering efforts have led it into cloning and other forms of genetic manipulation of humanity. The more rapidly it advances in science and computing the more the speed of advance increases so progress is exponential.

The economic system of China has developed in at least a partial free market way. By that I mean that it seems to me that the Chinese government has said to its people, look you let us run the government as we see fit and play our international games and we will let you work, build businesses, have jobs and otherwise get as rich as you are able. We will guarantee that you will have a job even if we have to create the jobs by building ghost cities that no one lives in. As a result the Chinese government is left alone to do what it wants and there aren’t one billion peasants threatening to descend on Beijing with pitchforks.

China and America: compare and contrast

To get a clearer picture of what I mean let’s compare some things between China and America today. The United States is now about 22 trillion in debt on the books with an unknown but astronomical debt that is usually called unfunded future liabilities. The debt makes the United States vulnerable to the policies of the Federal Reserve especially higher interest rates. In addition to the debt the United States runs huge trade deficits each year especially with China which means much more money flows out than in.

China, on the other hand, runs a large economic surplus which allows it to invest heavily in infrastructure for modernization purposes and to keep close to full employment. China is investing its resources in China both at home and abroad. The Chinese leadership gives me the impression that they actually want to put China first and look to the best interests of their own country. The United States is so hamstrung by debt and internal politics that it has very little ability to invest in its own infrastructure. If you doubt me on this point just drive across the country and you will see the jam packed highways in need of repair, bridges that need rebuilding, etc.

The Chinese government is apparently committed to moving China into a position at the top of the economic world. Here in America we are so divided and mired down in identity politics that we cannot accomplish anything as simple as agreeing on a budget. The President of the United States is no longer welcome in the House of Representatives for the purpose of telling Congress and the American people what he thinks the State of the Union is. America seems to be committed to investing in only one thing and that is the military. While building its military into the most technologically advanced force possible it seeks to control the world through the imposition of economic sanctions because it controls the financial system that the world is currently forced to use.

United States status as the world’s reserve currency, along with its being the world’s largest economy allows the United States to impose its will on other nations through economic sanctions. The sanctions do cause harm to the nations upon which they are imposed and as a result those nations ban together against their common enemy to find a way out of the dollar system as well as a way to trade outside the sanctions. According to Forbes Magazine, China is still the number two economy but it is clearly losing the trade war. Forbes further reports, “Donald Trump can be pleased, his policies have brought China to its knees.”

On liberty, China may surprise

The United States clearly excels in the area of human freedom, right? Well there are problems in America today even in that area. Freedom of speech is being constricted primarily by the tech companies of Silicon Valley but nevertheless constricted. We are strictly prohibited from criticizing certain protected groups while the unprotected ones are fair game. Christianity is officially legal in America, but those who actually practice it are portrayed in the media invariably as hypocrites and racists.

China strangely enough is on course to become the world’s most Christian nation within 15 years. Churches are springing up across China and even in small rural areas the buildings are sometimes what we might call mega-churches. Officially, China is an atheist country but Christian congregations are skyrocketing. A Purdue University study recently concluded that China will soon be the largest Christian country in the world. In 1949 when the Communists took control of the country, China had only about 1 million Christians. That number is expected to have grown to 160 million by 2025 or just 6 years from now. That number would put it ahead of the United States since the number of Christians in America is in decline. Churches, like car factories, are closing in America and opening in China.

Keep in mind that the numbers I have given include only protestant Christians. By 2030 the total number of protestant and Catholics combined will exceed 247 million. Mao set out to eliminate Christianity from China but instead Christianity eliminated Mao. It seems ironic that the things we normally think of as traditionally American and what made America prosperous and safe are being rejected in America. Things like free enterprise, the right to keep the fruits of your labor, a stable currency, and of course Christianity. The Chinese have recognized those things as having made America prosperous and they are hungry for them.

Smarter people, on the same page

China has some other advantages such as a huge population of highly intelligent people. It also does not have to deal with America’s diversity and the resulting problems of racial conflict. Except for a Muslim province in the West of China, it is primarily a monoculture of Han Chinese. Since it lacks America’s racial diversity there is not a large amount of conflict. No racial violence in the cities, no looting of stores or burning of cars, and very little street crime.

Huge urban sections filled with practically illiterate people do not exist in China as they do in America. I’ve traveled around the world but obviously my primary knowledge is America. For information I am giving you about China, I rely on people who have been there and lived there for much of their lives, in addition to publications such as Forbes.

China is trying to take its education system seriously.  Chinese students study and work long hours on homework in an effort to prepare for higher education preferably in America where colleges and universities are world leaders. At Universities such as Cal-Tech and Stanford the student bodies are at or approaching majority Asian.

In conclusion folks, both countries appear to be building a world empire. The American empire is primarily based on military power. The reasoning seems to be; if you obey us and agree to become our vassal then we will pay you well but if you don’t then we will invade and conquer you and perhaps hang your leader. China’s empire is primarily commercial as it tries to dominate the world through manufacturing and trade.

The United States usually tries to control the world through coercion favoring sanctions, embargoes, and especially military force. America has become so divided that it is hard for it to accomplish or build much of anything except for the military and related technology.

China does not appear to have descended into decadence and to have rejected its core values but unfortunately America does so appear.