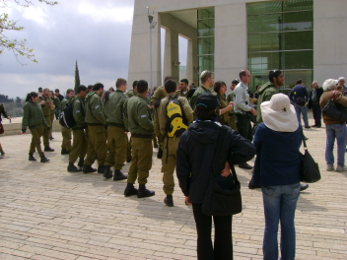 Anger, hatred, vengeance, killing and bloodshed, are generally looked down upon, even forbidden in Judaism, and not the behavior of an elevated individual, as it says in Leviticus 19:18, “You shall not take revenge…”

But, we see the inverse concept, on the national level, for the sake of Am Yisrael. Think about that next time the PalestiNazis lob rockets from Gaza, into innocent Israeli towns.

Vengeance of God or of the Israelites?

This week’s Torah reading, Matot, (Book of Numbers 31:1-3), describes the battle against Midian, after what they did to the Jewish people,

HaShem spoke to Moshe saying: Take vengeance on the Midianites for the Children of Israel. After that, you will be gathered to your people [you will die]. So Moshe said to the people: Arm some of your men to go to war against the Midianites so that they may carry out the Lord’s Vengeance on them.

The vengeance of Israel is God’s vengeance

The rabbis of the midrash (Tanchuma Matot 3) ask:

HaShem says “the Children of Israel’s vengeance,” and yet Moshe tells the Israelites, “HaShem’s Vengeance?”

They explain that Moshe then said to God:

If we were uncircumcised idol worshippers, they wouldn’t hate us, but because you gave us Your Torah they hate us.

And the rabbis conclude by teaching, the vengeance of Am Yisrael, to eliminate a Chillul HaShem (a dishonor to God), is God’s Vengeance, and a Kiddush HaShem (a sanctification of His Name in the world).

Moshe could have stalled for time, to live longer. But he was filled with Kedushah (Holy Energy), he lusted to see vengeance carried out on the Midianites (Kiddush HaShem), to avenge Israel’s, i.e. God’s Honor and rushed to carry out HaShem’s command, (Numbers Rabbah 22:2).

And who led the IDF to victory against Midian, in avenging Israel’s and God’s Honor?

The same Pinchas, who we’ve met in the last two Torah readings. He staved off a plague, by killing the prince of the tribe of Shimon, fornicating with a Midianite woman. So enraged was Pinchas (Aaron’s grandson) because of the Chillul HaShem, that he killed both of them, ending the plague that had broken out in the camp and had already killed 24,000 (Numbers 25:1-7, see also Sanhedrin 106a).

The same is true for King David, who responded to Goliath’s taunting of Saul’s army by taking him on and defeating him. David angrily shouted,

Who is this uncircumcised Philistine that he should taunt the armies of the living God?

David saw this as a Chillul HaShem (an emptying of God’s Presence in the world), by the way Goliath degraded the Jewish people, thus desecrating God’s Name.

David said to the Philistine,

You come against me with sword and spear and javelin, but I come against you in the name of the Lord Almighty, the God of the armies of Israel, whom you have taunted. This day the Lord will deliver you into my hands, and I’ll strike you down and cut off your head…and the whole world will know that there is a God in Israel. All those gathered here will know that it is not by sword or spear that the Lord saves; for the battle is the Lord’s, and he will give all of you into our hands.

After David killed Goliath, the Israeli army routed the PalestiNazis of their time, that day. (1 Samuel Chapter 17).

As the Rabbis tell us, “He who taunts Israel, taunts God.” Any war against the Jewish people, is a war against the God of the Jews and is a Milchemet Mitzvah, an obligatory war, to eliminate the Chillul HaShem as quickly as possible.

Vengeance is required after the murders of Jews for being Jews

So while individual Jews who are attacked and killed in hate crimes, terror attacks, the Holocaust, all died Al Kiddush HaShem; for the nation of Israel as a nation, its a Chillul HaShem, and needs to be avenged. To avenge the Jewish people’s honor, is to avenge God’s Honor in this world.

As the rabbis said (Berakhot 33a), “Great is vengeance because it appears between two names of God,” as it is written, “God of Vengeance, Lord, God of Vengeance shine forth” (Psalms 94:1).

To see the punishment of the wicked, brings Kiddush HaShem into the world. Then and only then, do the nations really know there is a God of Israel, as Midian learned, the hard way.

The PA refuses any deal with Israel

Last week, Palestinian Authority chairman Mahmoud Abbas announced, “the leadership’s decision to stop implementing the agreements signed with the Israeli side,” and the establishment of a committee to implement the decision of the PLO Central Council.

We will never surrender or agree to live with the occupation, nor will we bargain for the “deal of the century,” because Palestine and Al-Quds are not for sale or bargaining, and they are not real estate transactions. There will be no peace, security and stability in the region and the world if the Palestinian people does not fully realize their rights.

The thieves are complaining…

We might be watching the beginning of the collapse of the PA, B’Ezrat HaShem, God Willing.

Will the current Israeli government take a lesson?

Let’s hope that the current Israeli government will learn and then teach this important lesson on vengeance and Kiddush HaShem, to Hamas, Islamic Jihad, Fatah and the Palestinian Authority, Hezbollah, the Syrians and Iranians, ISIS and all the Jewish people’s sworn enemies today, as great Jewish leaders did in the past!

“Palestine” and “Philistia” are the same name. Emperor Hadrian of Rome, when dispersing the Jews in A.D. 135, changed the name of Judea to “Palaestina.” Furthermore, the Arab name for the region is Filastin. The name, furthermore, means “an unwelcome visitor.”

The current generation of “Palestinians” do not, however, descend from the Cretan Caphthorites from which came Goliath. Rather, they represent a third race of Philistines, after the Caphthorites, and the Avvites before them, whom Abraham knew.—Ed.

Is Our Current Congress the Worst Ever?

To The 94% Who Say They Don’t Believe The Mainstream Media, Who Told You Michelle Obama Is The Most Admired Woman? Here We Go Again…