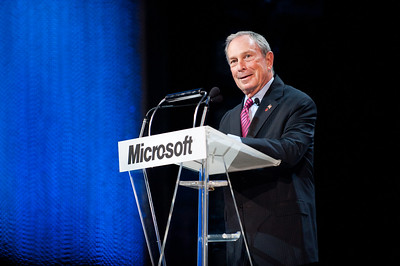 So what does astute multi-billionaire globalist Michael Bloomberg do? He announces himself the climate candidate of the 2020 presidential election. In a November 26, 2019 article, “Billionaire Buys ‘Climate Change’ on Google,” Brian Kahn reveals how Bloomberg plans to spend $1 billion of his personal fortune to buy Google ads that will reinforce his image as the climate candidate.

Bloomberg is betting that the galvanizing message of climate change is powerful enough to overcome any anti-Semitic objections to his candidacy.

Let’s examine what it means in real terms, in real life, to the lives of real voters if this self-described climate candidate wins in 2020.

We begin by debunking the foundational premise of Bloomberg’s political ads: Climate change is the greatest challenge and threat to life in the 21st century.

I have written three articles on the humanitarian hoax of climate change.

The Humanitarian Hoax of Climate Change

The first, The Humanitarian Hoax of Climate Change, introduces the purpose of the con. (See also here.)

First create the percept of a problem

The answer is found in understanding the nature of the hoax which has two parts. First, it is necessary to focus attention on the fabricated specter of catastrophic climate occurrences that will devastate the planet to deflect attention away from the actual threats to America from a nuclear Iran, the spread of Islamic terrorism, and the economic instability of a an unsustainable trade deficit.

Then offer a draconian solution

Second, Obama’s long term plan of an internationalized globalized world requires the de-industrialization of America. His crippling energy restrictions were designed to weaken America’s defenses by destroying America’s energy industry, making us more dependent on foreign energy, and increasing our trade deficit to unsustainable levels. Obama actively supported the punitive anti-American Paris Climate Agreement deceitfully presented as the premier humanitarian effort to save the planet from catastrophic climate change. Obama disguised his crippling rules and regulations to destroy U.S. energy as altruism and a humanitarian concern for the planet.

In a laughable outburst Big Footprint former Vice President Al Gore attacked President Donald Trump. Gore accused him of “tearing down America’s standing in the world” by withdrawing from the Paris climate accord.

Only in the eyes of a deceitful globalist would withdrawing from an anti-American agreement be destructive. Gore actually said with a straight face on NBC’s Today Show,

The climate crisis is by far the most serious challenge we face.

The second article, The Riddle of Climate Change (see also here), exposes the marketing of the convenient political lie.

From the horses’ mouths: Kevin (“Travesty”) Trenberth and Mikhail Gorbachev

A stunning Forbes article published 2.5.13 titled, In Their Own Words: Climate Alarmists Debunk Their “Science” quotes Kevin Trenberth, a lead author of 2001 and 2007 IPCC report chapters, who admits,

emphasized the importance of using climate alarmism to advance Marxist objectives saying, “The threat of environmental crisis will be the international key to unlock the New World Order.”

Gorbachev was referring, of course, to the globalist New World Order of an internationalized world community administered under the auspices of the United Nations.

My third article, The Humanitarian Hoax of Climate Change II – Debunking the Bunk, reviews the material and explains the efficacy of the lie of manmade climate change. (See also here.)

The climate changes, but “manmade” climate change is the deliberately misleading narrative that human behavior is causing cataclysmic changes to the Earth’s climate. The Climategate scandal exposed the fraudulent “research” that supported its politically motivated claims and exposed the hoax.

The United Nations IPCC goals are unapologetically stated in United Nations Agenda 2030 – the manifesto for imposing the new world order of one world government. The 17 Sustainable Development Goals reaffirm the United Nations globalist stance that planet Earth and its ecosystems are

our common home and that “Mother Earth” is a common expression in a number of countries and regions.

This is all Orwellian doublespeak to rationalize imposition of a New World Order of one world government under the auspices of the corrupt United Nations.

This article includes testimony by Greenpeace apostate Patrick Moore exposing the lie of “settled science.” He explains how environmental science has been completely co-opted by political science. There is not a shred of credible evidence that manmade climate change exists – but no matter. The truth never stops a determined huckster.

When they talk about the 99 percent consensus [among scientists] on climate change, that’s a completely ridiculous and false number. But most of the scientists — put it in quotes, scientists — who are pushing this catastrophic theory are getting paid by public money, they are not being paid by General Electric or Dupont or 3M to do this research, where private companies expect to get something useful from their research that might produce a better product and make them a profit in the end because people want it — build a better mousetrap type of idea.

Shaming is a powerful tool used and abused by humanitarian hucksters to promote their manmade climate change narrative, and to silence any opposition to their false claims of “settled” climate science.

The manmade climate change hucksters continue to perpetrate their monstrous hoax through fear and guilt. Fear is a powerful motivator for behavior change. If parents can be convinced that catastrophe will strike their children unless they change their own behavior, their guilt will motivate parents to change and the big lie of manmade climate change becomes generational.

American democracy is the single greatest existential threat to one-world government with President Donald Trump as America’s leader. The globalist elite are desperate to stop Trump because if Obama is exposed as a con man it leaves them without their primetime huckster to continue marching America toward anarchy and socialism with his “resistance” movement. The globalist elites who fund the leftist humanitarian hucksters are using them as useful idiots to facilitate climate alarmism and the great humanitarian hoax of climate change worldwide. It is a deliberate plan to create the overwhelming social chaos necessary to impose their own special brand of a New World Order.

Michael Bloomberg is also a member of the globalist Council on Foreign Relations, another globalist think tank dedicated to the New World Order.

David Rockefeller, former chairman of the globalist Council on Foreign Relations from 1970-1985 stated unapologetically in his Memoirs:

Some even believe we [Rockefeller family] are part of a secret cabal working against the best interests of the United States, characterizing my family and me as “internationalists” and of conspiring with others around the world to build a more integrated global political and economic structure – One World, if you will. If that’s the charge, I stand guilty, and I am proud of it.

Rockefeller also reveals an interlocking editorial board of the Mainstream Media

We are grateful to The Washington Post, The New York Times, Time Magazine and other great publications whose directors have attended our meetings and respected their promises of discretion for almost forty years. It would have been impossible for us to develop our plan for the world if we had been subject to the bright lights of publicity during those years. But, the work is now much more sophisticated and prepared to march towards a World Government. The supranational sovereignty of an intellectual elite and world bankers is surely preferable to the national auto-determination practiced in past centuries.

David Rockefeller to Trilateral Commission in 1991

What Michael Bloomberg signs onto

Lord Bertrand Russell wrote a book titled The Impact of Science on Society in 1952. This book unapologetically describes in chilling detail the intention of the few globalist elites in England and America, including the Rothschilds and the Rockefellers, to impose one-world government as the answer to the Malthusian problem of the earth’s resources being unable to sustain population growth. They want no national sovereignty, no middle class, no upward mobility, and no individual freedoms. The globalist elites envision a feudal binary socio-political system of masters and slaves. In it, they are the ruling elite served by an enslaved population – everyone else is eliminated.

World population needs to be decreased by 50%.

Michael Bloomberg, the 2020 climate candidate, is the personification of the humanitarian hoax of climate change and the man attempting to impose globalism’s New World Order. He is the consummate humanitarian huckster presenting himself as America’s advocate when in fact he is America’s existential enemy. If Michael Bloomberg becomes the 2020 Democrat candidate, the election will be a clash of the titans that will determine the future course and structure of life on Earth.

Your editor first broke the Climategate story ten years ago on a now-defunct site. It appears here, courtesy of the Wayback Machine. See also:

Celebrity Conversions That Just Don’t Line Up With Scripture