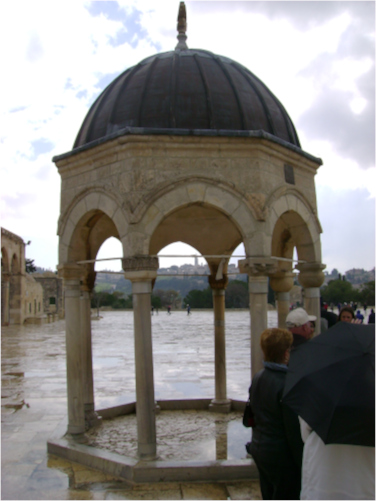 Has anyone noticed the irony of what took place this past week? While on Wednesday, President Trump and Prime Minister Netanyahu both made televised announcements of a peace agreement, the Abraham Accord, between Israel and the United Arab Emirates; the Torah reading, Parshat Re’eh, on Shabbat, mentioned fifteen times about building the Beit Hamikdash (the Holy Temple) on the Temple Mount in Jerusalem, “…the place which the Lord, your God, will choose to establish His Name…”

An ironic twist concerning the Temple in Jerusalem

Where’s the irony you ask, let’s take a closer look at what they actually said:

As set forth in the Vision for Peace, all Muslims who come in peace may visit and pray at the Al Aqsa Mosque, and Jerusalem’s other holy sites should remain open for peaceful worshipers of all faiths.

From the Joint Statement of the United States, the State of Israel, and the United Arab Emirates. Posted on the website of the US Embassy in Israel and tweeted by Trump in announcing the accord.

The Temple Mount should be for Jews alone.

The Temple Mount is meant to be exclusively under Jewish control, and the Jewish people are commanded in the Torah to build the Beit Hamikdash there (that includes even now), replacing the Dome of the Rock.

This isn’t the first time that Trump has referred to maintaining the status quo on the Temple Mount. Which means in practice, allowing the Muslims to continue to:

Notice Trump said, “…Jerusalem’s other holy sites…” Making a distinction between the Muslims on the Temple Mount and…what? The Western Wall (of the Temple Mount complex) down below? And the Church of the Holy Sepulchre in the Old City?

Then during his announcement he said,

This deal will allow much greater access to Muslims from throughout the world to visit the many historic sites in Israel, which the Muslims want to see very badly and have wanted to see for many, many decades. And to peacefully pray at the Al-Aqsa mosque, which is a very special place for them.

From Trump’s White House announcement of the Abraham Accord.

“…Al-Aqsa mosque, which is a very special place for them.” Has Trump converted to Islam? Why does he worry so for upholding the Muslim thieves’ “rights”?

He made no reference to:

Is this about Muslim pilgrimages?

A lot of the extremists have used these conflicts to recruit people and to say that the mosque is under attack and that Muslims don’t have access to the mosque. And now this will enable people to take flights from Dubai and Abu Dhabi directly to Tel Aviv. Muslims will be welcomed in Israel, and this will create a better interfaith exchange.

From Jared Kushner’s statement on the Abraham Accord.

What I hear is everyone rubber stamping the dominant position of the Muslim occupiers, on the Temple Mount. This without concern for Jewish rights to their own holy place. Shame on Kushner.

Netanyahu on peace – but is it peaceful?

Then Prime Minister Netanyahu spoke live to the Israeli people, and deceived them.

…true peace, not a slogan, peace from strength, peace for peace…

From Netanyahu’s Hebrew statement on the Abraham Accord.

In Hebrew “Shalom Tmurat Shalom – peace for peace,” is a slogan in part of the Israeli Right, which they use to differentiate between previous peace agreements with Egypt, Jordan, and the peace process with the Palestinians, in which Israel always made concessions, and some mythical “peace” of the future, without any more concessions on the part of Israel.

But that’s simply not true. Netanyahu has implicitly accepted the possible outcome of Trump’s plan, a Palestinian State in parts of Judea and Samaria. Actually, quite a high cost, for “peace.”

Tisha B’Av – the anniversary of losing the first Temple

26 is the numerical value of HaShem’s name in Hebrew. I think He’s “Winking,” sending a message about how we’re messing up again. And He’s watching…and this just after Tisha B’Av.

In fact, most of the major turning points in the “peace process” have been around Tisha B’Av or Rosh HaShanah.

Then after speaking in Hebrew, and fielding reporters questions, Netanyahu gave a summary statement in English and said,

And today, I am honored to announce a formal peace agreement with [the United States], the United Arab Emirates…

From Netanyahu’s English statement on the Abraham Accord.

Netanyahu’s Freudian Slip, saying the United States, then correcting himself, and saying the United Arab Emirates, was later cleaned up, i.e. removed from the official transcript posted on the Prime Minister’s Office website.

I can understand his slip. The Americans have been calling the shots. Netanyahu’s happy he has peace with Trump, compared to the situation with Obama. And he’s happy to be doing Trump’s bidding, to help Trump out before the November presidential elections with a PR victory.

Re’eh: a command to build the Temple where the LORD says to build it

Yet in this week’s Torah reading, Re’eh, Moses tells the Jewish people fifteen times, how HaShem will direct them to the place He wants them to build the Beit Hamikdash, and there they shall serve Him.

But only to the place which the Lord your God shall choose from all your tribes, to set His Name there; you shall inquire after His dwelling and come there.

And it will be, that the place the Lord, your God, will choose in which to establish His Name there you shall bring all that I am commanding you: Your burnt offerings, and your sacrifices, your tithes, and the separation by your hand, and the choice of vows which you will vow to the Lord.

“I dwell in a house of cedar…”

It will be, that the place [which the Lord your God will choose… there you shall bring all that I am commanding you]: [At that time,] build for yourselves the Temple in Jerusalem. And so [Scripture] states concerning David, “And it was, when the king sat in his house and the Lord had given him rest from all his enemies surrounding him, that the king said to Nathan the prophet, see now, I dwell in a house of cedars, but the Ark of God dwells within the curtain.”

Carry the burnt offerings to the Temple

If the place the Lord, your God, chooses to put His Name there, will be distant from you, you may slaughter of your cattle and of your sheep, which the Lord has given you, as I have commanded you, and you may eat in your cities, according to every desire of your soul.

However, your holy offerings which you will have, and your vows, you shall carry, and come to the place that the Lord chooses.

The place of Passover

You shall slaughter the Passover sacrifice to the Lord, your God, [of the] flock, and [the Festival sacrifices of the] cattle, in the place which the Lord will choose to establish His Name therein.

No other place but the Temple

The only other time the Hebrew word for chosen is used in Re’eh, is when Moses says,

For you are a holy people to the Lord, your God, and the Lord has chosen you to be a treasured people for Him, out of all the nations that are upon the earth.

One place only to build the Temple

Rashi there, quoting the Sifrei states,

For you are a holy people. Your holiness stems from your forefathers, and, moreover, “the Lord has chosen you.”

The Chosen People, are to build the Beit Hamikdash, the God of Israel’s Chosen House of Prayer, in the Chosen Place, on the Temple Mount in Jerusalem. There is no point to allow the historical scam of the Muslims to continue. See the Irony now?

Shoftim: Tzedek, Chasidut and the Tzadik State of Israel