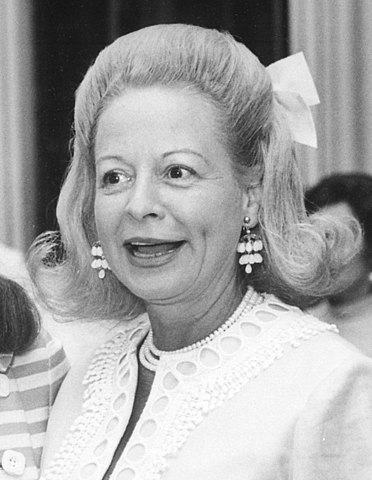 Does anyone remember Martha Mitchell? I do.

The life of, and sad ending for, Martha Mitchell

Martha Mitchell was the wife of John N. Mitchell, United States Attorney General under Richard Nixon. Martha had a habit of listening in on John’s phone calls and meetings. She would then phone her media friends with political scoops.1

John Mitchell and Richard Nixon became acquainted through their professional careers when their law firms merged and became Nixon Mudge Rose Guthrie Alexander and Mitchell. In 1968 Nixon appointed John Mitchell as his attorney general. The Mitchells moved from New York to Washington DC, and into the Watergate apartment complex.

In 1972, John Mitchell resigned as attorney general and became the director of the Committee to Reelect the President (CREEP). Martha Mitchell became an outspoken DC socialite who regularly went on talk shows and frequently talked to the press. During the campaign, Martha began telling her media contacts that CREEP had begun resorting to dirty tricks to win the election.

What Martha Mitchell warned people about

The dirty tricks Martha Mitchell referred to were the:

The wiretaps failed to work properly the first time. So on June 17, 1972, five burglars broke into the Watergate offices to finish the job. Four of the burglars, James McCord, Frank Sturgis, Eugenio Martinez, and Bernard Barker, had CIA connections. The fifth, Virgilio Gonzales, was a locksmith in Miami who fled Cuba after the Castro takeover.2

A week before the break-in, the Mitchells traveled to Newport Beach, California to attend a series of fundraising events. John Mitchell received notice that his wife had made these explosive allegations. He denied Martha’s extraordinary claims at a news conference, and then engineered the plan to keep her in California. Mitchell hired Steve King (former FBI agent) to isolate Martha and make sure she knew nothing about the Watergate break-in and could not contact any reporters.

In a 1973 interview with English journalist, David Frost,

Martha Mitchell recounted the horror of being held captive in a California hotel for four days. Martha was a political liability and collateral damage of Nixon’s dirty tricks. She needed to be silenced and discredited. Of course we now know that Martha was telling the truth, but her life was destroyed. She was publicly shamed, divorced, estranged from her children, and died alone from a rare bone cancer in 1976. Martha Mitchell was a warning.

A court convicted John Mitchell of conspiracy, obstruction of justice, and perjury in connection to the Watergate break-in. He spent two years in prison from 1977-1979. But no one ever brought him to trial for arranging the kidnapping of his wife. John Mitchell died in disgrace on November 9, 1988, yet was buried with full military honors in Arlington National Cemetery. Now, back to the dirty tricks.

In August 1972, Nixon lied to the American people in a speech insisting he was not connected to the burglary in any way. The truth is that Richard Nixon was deeply involved in the dirty tricks and the coverup. Furthermore, he had instructed the CIA to impede the FBI investigation of the crime. Obstruction of justice and abusing presidential power are far more serious crimes than the Watergate break-in itself. Sound familiar? It should.

Like Nixon, former President Barack Obama abused his presidential powers and obstructed justice by weaponizing the FBI and CIA for political gain. Barack Obama had the FBI and CIA illegally spy on the Trump campaign through fraudulent FISA warrants. Obama’s Democrat minions, and their globalist handlers, have been trying to overthrow America-first President Donald J. Trump, the duly elected sitting president of the United States, for four years. The current hypocritical Democrat jibber-jabber about a peaceful transfer of power following the outcome of the contentious 2020 presidential election would be laughable if it weren’t so serious.

The ongoing Democrat dirty tricks and multiple coup attempts against President Trump have escalated to a politicized Martha Mitchell effect. I will explain.

In the Martha Mitchell effect, a psychiatrist mistakenly or willfully identifies a patient’s true but extraordinary claims as delusions. It is an unconscionable attack on objective reality and the person’s ability to test that reality. Before Martha Mitchell’s unfortunate clash with the deep state, what was done to her was called gaslighting.

Gaslighting is a form of psychological manipulation in which a person or group covertly sows the seeds of doubt in a targeted individual or group, making them question there own memory, perception, or judgment, often evoking in them cognitive dissonance and other changes, including low self-esteem.

From Ingrid Bergman (actress) to Martha Mitchell (not pretending) and beyond

The goal of gaslighting is to destabilize the individual and delegitimize the victim’s beliefs and claims.

For movie buffs, the term gaslighting derives from the 1944 film Gaslight starring Ingrid Bergman, Charles Boyer, and Joseph Cotten. In the film the husband deliberately tries to convince his wife that she is insane. Gaslighting is a particularly sinister attack on a person’s perception of reality.

I discuss how the the radical leftist Democrats and their globalist handlers are attempting to regress chronological adults back to childish thinking, so they can more easily manipulate and control them. It is a malicious and intentional exploitation of the NOW thinking of childhood. It is a psychological operation, a PSYOP.

If a chronological adult can be frightened enough to regress his thinking back to that of a child, he will respond like a child. That is the foundation of the deliberate disinformation and fear campaign gripping the country today. The unconscionable lies presented in Biden’s campaign ads have Joe Biden’s approval.3 These deliberate lies have the design to frighten seniors. The Biden political machine knows that if they can frighten seniors enough, the seniors will regress back to childish acceptance. Then they’ll believe Biden’s lies instead of examining President Trump’s record. It is a political PSYOP.

The Democrats, big tech Twitter, Facebook, and Google immediately went into overdrive to censor the story and deny its claims as “Russia disinformation” and a “false narrative.” Russia again?? Yup – the enemies of objective reality trotted out their tired, old, debunked, false Russia narrative yet again.

Rep. Adam Schiff (D-Calif.), the House Intelligence Committee chairman and a top Democrat claimed that the Post stories on Hunter Biden’s business dealings in Ukraine and China are part of a smear campaign and comes from the Kremlin.

Director of Intelligence John Ratcliffe immediately dismissed Schiff’s claims. “It’s simply not true,” Ratcliffe continued. “And this is exactly what I said I would stop when I became the Director of National Intelligence. And that’s people using the intelligence community to leverage some political narrative.”

We all are Martha Mitchell now

If it weren’t so dangerous, it would be entertaining to watch the desperate Democrats do everything they can think of to drive Americans into their world of lies and subjective reality. Big tech and the mainstream media are actually following the communist Chinese propaganda model. Which includes censoring, distorting, and falsifying the news for social control. This should frighten every American regardless of their political views. Without freedom of speech there are no individual freedoms in society.

Today, the increasingly deranged radical leftist Democrats, and their globalist handlers are resorting to gaslighting. With the help of the colluding tech giants and mainstream media, they are trying to gaslight the American people. They hope to make them believe that the Biden crime family is innocent, and subject to false accusations! This attack on objective reality is the culmination of the sinister war on America. Which also is the war on America-first President Donald J. Trump.

Russia is not interfering in the election. It is the big tech Internet companies and mainstream media that are attempting to steal the election for their candidate, Beijing Joe. Like John Mitchell, they should face charges of conspiracy, obstruction of justice, and perjury for their part in the plot to censor the explosive story of the Biden crime family.

The evidence of staggering political malfeasance discovered on Hunter Biden’s laptop is the quintessential smoking gun. Yet, when President Trump refers to the Biden crime family, the colluding big tech companies and mainstream media:

DOJ Attorney General William Barr, John Durham, Christopher Wray (FBI), and Gina Haspel (CIA) are the gatekeepers of the deep state Washington swamp. They have slow-walked, and deliberately impeded the investigations into Democrat political malfeasance that would have:’

One must understand that Joe Biden’s family financial involvement in China make Joe Biden a serious threat to national security. The coordinated attacks on President Trump are attempts to gaslight America. If they succeed and Beijing Joe Biden becomes president, China will not just own America; China will rule America.

President Trump has endured an unprecedented four-year campaign of anti-American, pro-socialist, pro-communist, pro-globalist deep state attacks on his presidency and his America-first policies. Why?

Because President Donald Trump is the singular force standing between American freedom and tyranny. Vote for freedom. Vote for Trump!

This 1969 photo of Margaret Mitchell appears courtesy of the U.S. National Archives and Records Administration.

1 One wag said no child’s doll of Martha Mitchell could possibly be realistic unless the doll talked.

2 Senator Sam J. Ervin (D-S.C.), Chairman of the Senate Select Committee on Presidential Campaign Activities (“The Senate Watergate Committee”), famously and hilariously upbraided Gonzales when that worthy testified before his Committee: “How did you expect to liberate Cuba by perpetrating a burglary in Washington, D.C.?!?”

Related Topics:mediapoliticiansPresident Trump
Up Next

Insanity Is the New Normal