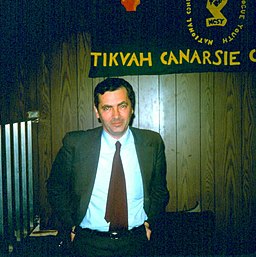 This past week’s Torah reading, Vayera, coincided with the 30th remembrance of the murder of Rabbi Meir Kahane. He was the founder of the Jewish Defense League in America (JDL), a former member of Knesset, and leader of the later outlawed Kach party. Rabbi Kahane fought to protect Jews from anti-Semitism in America, increase Jewish identity and national pride, and free Soviet Jewry.

But he was probably best known for advocating the transfer of Arabs out of Israel, to a nice life somewhere else, to put an end to the Arab-Jewish conflict in Israel, and bring true peace there.

Something else happened recently: the serial liar, Saeb Erekat, died. He was the Secretary-General of the Palestine Liberation Organization and chief “Palestinian” negotiator. And he often claimed that he was “indigenous” to “Palestine.”

He had claimed at various times, to be descended from the Canaanites, the Philistines, to be an Arab, a Palestinian, and a Jordanian. As for example, in a February 2014 interview with “Dunya al-Watan” where he said,

Yet, thanks to the “Elder of Ziyon,” and his investigations, we know that his family actually came from the Huwaitat region of the northwestern Arabian Peninsula. On the Facebook page of the Erekat family, it also says that before Huwaitat, their ancestors emigrated from Medina, today in Saudi Arabia.

Many Palestinian family names actually reveal their true family origin. For example, Mograbi, indicates that the family migrated from the Morocco area (Maghrib in Arabic). The name Masarwi comes from Misr, which is Egypt, in Arabic.

The whole Palestinian narrative, is similarly fabricated on such outright lies.

So to Saeb Erekat and his lies, I say good riddance.

With today’s multiplicity of treaties…

Now that “Peace” is breaking out all over the Middle East, between Israel and the UAE, Bahrain, Sudan, and with proposed countries such as Morocco and Saudi Arabia to be included in the near future, let’s examine a creative solution to the “Palestinian” problem, something long ago suggested.

But first, one should ask, was Rabbi Kahane even the first one to advocate expelling violent enemies, for attacking Jews?

In this past Torah reading, Vayera, we find Sarah, telling Abraham,

Get rid of that slave woman and her son [Ishmael – father of the Arabs], for that woman’s son will never share in the inheritance with my son Isaac. (Genesis 21:9-10)

Sarah had seen Ishmael constantly picking on little Isaac, and setting a bad example for him.

The matter greatly distressed Abraham regarding his son [Ishmael]. But God said to him, “Do not be so distressed about the boy and your slave woman. Listen to whatever Sarah tells you, because it is through Isaac that your offspring will be reckoned. I will make the son of the slave into a nation also, because he is your offspring.”

But they can not live together in the same land. So Abraham listened to God and expelled him and his mother. (Genesis 21:11-14.)

There you go, right from the start of the Jewish people, the solution to attacks on Jews, is to expel the perpetrators. Mother Sarah in her woman’s wisdom, sees the future, that the Arabs and the Jews can’t live together, and God backs up her demand on Abraham, to expel Ishmael.

Drive out the inhabitants…

Later, God codifies it in the Torah,

You shall drive out all the inhabitants of the land from before you….You shall take possession of the land and settle in it, for I have given you the land to possess.

But if you do not drive out the inhabitants of the land from before you, then those whom you let remain shall be as barbs in your eyes and thorns in your sides; they shall trouble you in the land where you are settling. (Numbers 33:52-53, 55)

Even the nations understood this. In the 20th century, several internationally sanctioned population transfers were implemented, to separate warring peoples.

Most notably, the Greco-Turkish agreed mutual expulsion in the 1920’s, of about 1.6 million people, and the Pakistani-Indian exchange, after British decolonization in 1947, where 10-12 million people were displaced.

Then there was the forced expulsion of about 12-14 million ethnic Germans (between 1944-50), from central and eastern Europe, to create more homogeneous states, after the war.

So, as Rabbi Kahane documented in his book, “They Must Go” (1981), population transfers and forced expulsions had been being used, long before his proposal to transfer the Arabs out of Israel. In fact, his plan was quite merciful, by international standards, since he proposed offering money to the Arabs to leave.

Even some Arab leaders had previously suggested transfer as a solution to the conflict.

For example, in 1939, Mojli Amin, a member of the Arab Defense Committee for Palestine put forward a proposal for the transfer of Arabs from Palestine. This proposal was published in Damascus and distributed among Arab leaders. Amin proposed that all of Palestine be given to the Jews.

Amin proposed that this exchange of populations, should be carried out in the same way as the Greco-Turkish population exchange, and that special committees should be established to deal with the liquidation of Jewish and Arab property. He realized that at first there would be great difficulties, but he hoped they would be finally solved. (Joan Peters, From Time Immemorial (New York, 1984), p.25, and Proposal, 21 May 1939, [CZA S25/5630]).

Later, in 1946, Britain awarded Transjordan (what had been 75% of the Palestine Mandate) independence, and Abdullah ibn Hussein became its King. His Prime Minister was an Arab jurist named Ibrahim Pasha Hashem.

In July 1946, Alexander Kirkbride, from the British Legation in Amman, reported on his meeting with King Abdullah and the Prime Minister. Various ideas for the future of the Palestine were discussed and Kirkbride wrote that Abdullah was,

for partition and he feels that the other Arab leaders may acquiesce in that solution although they may not approve of it openly.

In Kirkbride’s meeting with Ibrahim Pasha, Pasha proposed a population transfer, to avoid future conflict in Palestine. Kirkbride reported that,

He [Pasha] went on to say that, in his opinion, the only just and permanent solution lay in absolute partition with an exchange of populations; to leave Jews in an Arab State or Arabs in a Jewish State would lead inevitably to further trouble between the two peoples. Ibrahim Pasha admitted that he would not be able to express this idea in public for fear of being called a traitor.

About a month later, a telegram sent from Amman to the British Foreign Office stated,

King Abdullah and Prime Minister of Transjordan both consider that partition followed by an exchange of populations is the only practical solution to the Palestine problem. They do not feel able to express this view publicly because having regard to the possibility of the Arab area of Palestine being joined to Transjordan they would be regarded as prejudiced.

For an excellent review of the subject, check out, “A Historical Survey of Proposals to Transfer Arabs from Palestine 1895 – 1947,” by Rabbi Dr. Chaim Simons (2004 – it can be found at chaimsimons.net).

So with “Peace” breaking out between Israel and multiple Arab states, why not raise the suggestion of Mother Sarah, the Sarah Solution, to compliment the Abraham Accord, to end the conflict with the so-called Palestinians. Let the Arab countries, reabsorb their Arab settlers, who unjustly invaded and colonized the Land of Israel. Now is a wonderful time to propose an international conference to carry that out.

True peace must be built on truth, not falsehood, otherwise it’s not true peace, and will collapse.

An expression in the midrash and early Torah commentators, is “Ma’aseh Avot Siman l’Banim,” the deeds of the fathers are signs/guides to their children. Mother Sarah was teaching her children, us, the Jewish people, an important lesson.

When will we learn it?

The Most Important Victory Since 1967