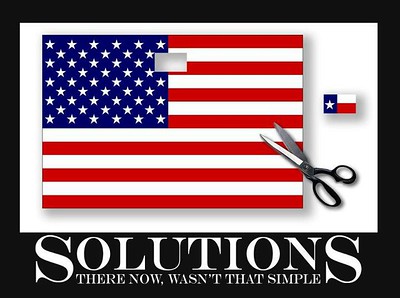 Freedom lovers in America now have started talking about secession for protecting their liberties. At minimum, they express a desire to “divorce” from their fellow Americans. For they have made a judgment that their fellow citizens have elected a tyrant and desire the tyranny. Of course, Entrepreneur Mike Lindell disputes that claim and accuses a foreign power of altering vote totals in all fifty States, not only to swing the election but also to pretend that the “victor” enjoys majority popular support when he does not. But suppose, as seems likely today, courts of competent jurisdiction continue to refuse to examine his evidence? What then? Shall freedom-loving people strive for secession, by either States from the Union or “the country” from “the city”? And: what does the Constitution have to say about secession?

Secession talk predates the Election of 2020

Note carefully: talk of secession, in some form, did not begin with the realization that fraud prevailed in the Election of 2020. It started long before – and indeed before the Midterms of 2018. Victor Davis Hansen at National Review and Jesse Kelly at The Federalist made the most coherent arguments. (CNAV does not count the Kelly Turnbull books by Town Hall’s Kurt Schlichter. These are fiction, and CNAV has only a bad – as in “dubiously accurate” as well as unfavorable – review of them available. CNAV would prefer to reserve judgment on them until after reviewing them directly.)

Hansen and Kelly sounded warnings that definitely seemed overwrought in 2018 but which events have proved clearly prescient. One can read Hansen’s article here and Kelly’s articles here and here. In brief, Hansen and Kelly foresaw five influences they blamed for driving Americans apart:

Hansen suggested that economic policies aimed at increasing participation in the workforce would let off much of the dangerous steam. He had a point: Obama could boast of low unemployment only because people gave up looking for work. The Bureau of Labor Statistics might as well have declared such people “unpersons,” to borrow a term from Orwell.

Furthermore, Hansen called for educational reform, a religious awakening, and – critically – the development of a new civic nationalism. Hansen couched it in different terms, though it adds up to this: “There is only one race: the human race!”

But – whether because 81 million people really were “that stupid,” or because Mike Lindell is right and the Communist Chinese really did gimmick elections in 50 States – the trends of which Hansen warned everyone have only gotten worse. “Bidenomics” has failed the American people. The government further debases the currency and pays people not to work. Education at all levels promotes socialism and the dangerous critical theory that says that racist ≡ white, etc.

And so we come to Kelly’s solution: let the “red States” have one country and the “blue States” another. This goes beyond Texit and the Texas Nationalist Movement. Kelly calls for all “red States” to form their own alliance and have their own President, Congress, and judiciary. Others (like Steven Turley, PhD) have suggested that the real divide is between city dwellers and country folk.

What does the Constitution have to say about this?

The Framers of the Constitution took certain steps to avoid the kind of split for which Kelly advocates. They most memorably included:

But: does the Constitution forbid secession? Those who say it does, point to the Fourteenth Amendment. The Fourteenth Amendment does more than define citizenship and stop States from abridging the rights in the Bill of Rights. It provides for two key sanctions against any future “insurrection or rebellion.” They are:

Everyone certainly assumed so, after the War Between the States. But those who crafted the Fourteenth Amendment, did so in a sloppy manner. Never once did they define the terms “insurrection” or “rebellion.” Nor did they include the concept secession as part of the concepts insurrection or rebellion. (They also failed to distinguish “born or naturalized … citizens of the United States” from “natural born citizens.” But that’s another debate.)

In point of fact, no one has ever tested, in the Supreme Court or any court of law, whether secession is a legal subset of rebellion. So when someone says – in a forum that shall remain nameless – that any State governor who tries secession “will be doing ten to twenty” in a Federal penitentiary, such a person is talking through his hat. He is assuming facts not in evidence and for which no one has ever laid the slightest foundation.

The only test of secession has been active warfare. The record on that is in fact mixed. Secessionists lost the War Between the States, true enough. But they won the American War for Independence. Furthermore, those calling for secession today could easily draft an instrument, like the Declaration of Independence, setting forth casus belli comparable to that which Jefferson cited against the British crown.

No, the Constitution does not forbid secession

So, no. The Constitution does not expressly forbid secession. The most one could say is that the Constitution has no procedure for it. That’s not to say that secession could not happen, nor that reasonable people might see their way clear to it.

And what sort of voices do we hear in opposition to it? Take, for example, Christian Vanderbrouk’s essay at The Bulwark. “It’s time to stop talking about a ‘national divorce,’” he complains. Here is that review of dubious quality CNAV mentioned above. In 2019 he was taking alarm at the thoughts of men like Hansen and Kelly. But what would he say today, when what he described as a lurid fantasy of Leftist oppression is becoming real? Would he defend that? Probably he would – for The Bulwark is full of such facile arguments as Vanderbrouk’s. Nor have they changed in the intervening two years.

Which means conservatives may justly say that they’ve had the last advice they’ll have out of apologists, either for the current Democratic regime or for Republican establishment types. Secession becomes the last resort when all attempts to right some serious wrongs, fail.

This article addresses directly the considerations that have led the Texas Nationalist Movement to pursue their present course of action. Accordingly, it is now part of the Texit List.

We Have All Of The Information That We Need: Tolerating More Political Crimes, Politicians, Agencies Within State & Federal Governments Is The Recipe For Self-Destruction