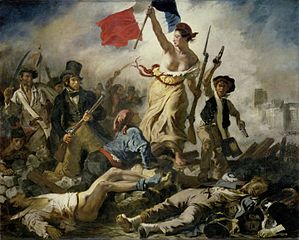 Many, on various social media, have speculated on what we who support Donald J. Trump, want to happen to society. And they typically do so in overwrought, petulant, and frankly paranoid terms. Two things one can discern from their rants. First, they like the program of Joe Biden (or his handlers). What’s more, they don’t care whether he stole an election to get where he is (or whether his handlers stole it to put him there). Second, they would just as soon kill as look at anyone who disagrees with them. So they speculate wildly on what a Trump Revolution would look like, and the goals it would set. They can’t afford to let the rest of us seem reasonable. But we need a manifesto, which I find sorely lacking. Herewith CNAV’s manifesto for the Patriotic Revolution.

Quasi-legislative and quasi-judicial executive agencies, in particular, violate the separation of powers. Moreover they have missions the Constitution never mentions. Article I, Section 8 enumerates most of the powers of Congress, for things like:

Nowhere in the shopper’s list of powers of Congress that is Article I Section 8 will anyone find:

among other violations or excessions of the Constitution.

Congress passed Amendment XVI to allow Congress to tax incomes without apportionment among the States. Other than that, we have seen informal amendments to the Constitution, in:

It is high time – and way past time – to correct these serious errors. And herewith the plan to do it: the Manifesto of the Patriotic Revolution. It assumes a sweeping “wave” election that gives the country a new President (or gives the rightful President back). It also assumes two-thirds supermajorities in the House of Representatives and the Senate.

The Patriotic Revolution – removing the obstacles

First: expel from the Congress certain Members who have demonstrated infidelity to the Constitution. Two-thirds supermajorities in Congress can do this. Furthermore, remove from the bench through impeachment, any judge or Justice (of the Supreme Court or any Court of Appeals) who behaves this way. Strict construction of the Constitution will be the standard of fidelity, and “emergency powers” will not be a recognizable defense.

In addition, try by court-martial certain generals and admirals who have aided and abetted the subversion of the Constitution. These general and flag officers today owe their appointments to Barack H. Obama. And they have behaved in manners inconsistent with their duties, or have boasted of the same. General Mark Milley, the current Chairman of the Joint Chiefs of Staff, is the current case in point. He has boasted of subverting the President – and going outside the chain of command to do it. So he must stand trial to determine whether his boast is:

About those Executive Orders, and the climate change debate

The Patriotic Militia Manifesto assumes the election of a new President and Vice-President. Alternatively, two-thirds supermajorities in Congress can remove the President and Vice-President from office when they remove those unfaithful judges and Justices. In either event, the new President should nullify every Executive Order that has come from the current administration. If any EO has any merit—and at the momentCNAVcan’t imagine any—then let the new President, probably Trump but Ron DeSantis could do as well—issue a new one, retaining only the meritorious parts.

Next, the Senate (or the House) should seat a Select Committee on Allegations of Anthropogenic Climate Change. This Committee would examine the evidence for and against:

The NIH, NASA – and “Doctor” Fauci

The new Congress must next do away with the National Institutes of Health and even of the National Aeronautics and Space Administration. Let Congress devolve their missions on interested private parties. America likely has no need for government space programs, not with the Space Exploration Technologies Corporation (SpaceX) running a private space program. Congress might need a few laws allowing interested and hard-enough-working private parties to profit from their use and exploration of outer space. SpaceX could, to begin with, expand its mission to take over NASA’s deep-space-exploration mandates. And if thar’s platinum in that thar Asteroid 16 Psyche, let SpaceX go get it and mine it.

As for the NIH, never again with any officials of those Institutes see their orders carry the force of law. Furthermore, Anthony S. Fauci, M.D. must stand trial to address allegations of scientific plagiarism and treason by him.

The Patriotic Revolution will do away with quasi-legislative and quasi-judicial executive rule-making bodies, including EPA, OSHA, NLRB, etc. Private operators already exist and can easily expand to take on many of their functions. To handle their judicial functions, replace codes of regulations with detailed codes of law. That means replacing administrative law judges with actual judges that get their appointments “by and with the advice and consent of the Senate.” Environmental law would become a matter of respecting the property rights of one’s neighbors, both immediate and “downstream.” It would make for some interesting court cases, but court—a real court—is the place to decide such things. For certain other kinds of regulations, parties like the following would better serve the country in handling them:

With the downsizing of government and recognition of a limited police power, most of the government’s light-duty vehicle fleet would pass into private hands. Congress could pass a law to support electrifying the remainder of that fleet with things like:

But these would not discriminate against a company like Tesla just because they’ve never permitted a union organizing election!

The Patriotic Revolution takes on the Medical Establishment

We now see the Federation of State Medical Boards of the U.S. starting a campaign to revoke licenses from physicians who challenge the flawed—indeed dangerously fraudulent—COVID Narrative. For that reason, the Patriotic Revolution must do away with the requirement of a government license to practice medicine. Alternative medicine must take its place as a valid alternative (pun intended) to conventional, allopathic medicine. Then may the best treatment win.

With one exception! The law must refuse recognition of change of gender from birth gender by reason of surgical mutilation and hormonal poisoning. This must apply whether the said mutilation or poisoning is:

The definition and punishment of child abuse will be the responsibility of State and local governments. These are valid exercises of their police power. But no challenge to any law forbidding a parent or guardian to order such mutilation and poisoning of any children under their care can again be valid in any court of law in the land.

Progressive income taxation must end. So must anything else that punishes success and rewards mediocrity and failure. The Patriotic Revolution envisions a drastic cut in spending, with the ending of unconstitutional programs. This automatically reduces need for tax revenues. Congress shall once again apportion all direct taxes among the States according to population as per the Census. Which means repealing Amendment XVI.

Congress must also revoke its disastrous delegation of money coining, and its utterly unconstitutional grant of authority to emit bills of credit, to the Federal Reserve System. Indeed Congress must abolish that system and restore precious-metal-standard, full-reserve banking. Let Congress also lpermit new forms of banking in which commodity warehouse/tank/other certificates would be negotiable and usable as tenders for debts.

As long as Congress is repealing parts of the Constitution that earlier Congresses and Presidents have abused, let’s repeal two others. First is Amendment XVII, for popular election of Senators. The original Framers intended that Senators be ambassadors of their respective States. For that reason, State legislatures chose Senators. They should do so again, but have the authority to recall Senators who violate the Constitution, their instructions, or both. The Senate would retain its authority, by a two-thirds vote, to expel a Senator.

The other is Article I, Section 8, Clause 9 – about “post offices and post roads.” Today Congress has delegated that exclusive authority to a private entity. The United States Postal Service is a private corporation having an exclusive franchise. The Patriotic Revolution should abolish the exclusivity and permit other interested parties to carry mail if they want.

The right to keep and bear arms

A well-regulated militia is necessary to the security of a free State. For that reason, and to permit individual citizens and lawful residents to defend themselves as well as their homeland,the right of the people to keep and bear arms shall not be infringed.

Congress must also pro-actively recognize the irregular militia as a valid “home guard.” That means removing any interference with militia operation in times of natural disaster—or of territorial invasion. The “Cajun Navy” is as close to an American Patriotic Naval Militia as we have. As part of this recognition, Congress must abolish all “gun control” legislation as contrary to the Second Amendment. A citizen in good standing (regardless of race, gender, etc.) has the right to arm himself (or herself) at least as well as, if not better than, an infantry soldier. The law must so recognize. (And a criminal court judge alone should decide the “standing” of a citizen or resident in this context.)

Any decision to privatize education, and whether to demand a minimum standard of education that every parent or guardian shall ensure that the children under the care of said parent or guardian shall receive, and what standard to set, must be a State responsibility. The federal government should have no further role in education, beyond the maintenance of its service academies. Thus the new Congress must abolish the Department of Education. In fact, Congress must abolish all departments except those of State, the Treasury, Defense, and Justice. Let Congress move the Bureau of the Census to the Department of State, where it belongs. The Commerce Department should no longer exist and should no longer have authority over the Census.

This last plank in the Patriotic Revolution platform will strike many as the most controversial. Certainly CNAV does not know of any who has given this any thought, except perhaps libertarian theorist Murray F. Rothbard. It is: devolve the planning, construction (with the consent of property owners in the “right-of-way”), maintenance, rule-making, safety patrolling, and, where applicable, revenue generation of and from highways, boulevards, avenues, roads, and streets to private “turnpike” operators, merchant associations, and homeowners’ associations. This will put an end to disputes over lack of snow clearance in some neighborhoods, and put road planning and rail transport on the same footing. CNAV has in fact discussed this here, here and here.

Final note: what the Patriotic Revolution would not be

This is CNAV’s best suggestion for a Patriotic Revolution Manifesto. Notice what it does not do. It does not discriminate against anyone for what that someone cannot change. (Though it does do what all sound societies do: require that everyone in them make good choices.)

Command – the missing element in the militia

We Have All Of The Information That We Need: Tolerating More Political Crimes, Politicians, Agencies Within State & Federal Governments Is The Recipe For Self-Destruction