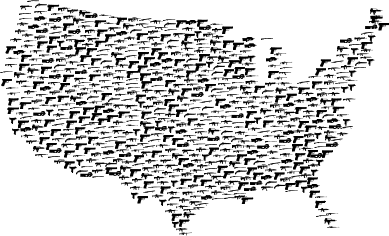 Command – that’s what’s missing from the American Patriot movement. This movement has many key elements of what I would call the American Patriotic Militia. This would not be the National Guard or the reserves. It would not answer to any national or State government. The militia, as I have said before, belongs to us. It serves as our last line of homeland defense, and as the reset button on the Constitution.

What elements of the militia do we have?

Earlier I mentioned the elements of the American Patriotic Militia that now exist. They include, according to Dr. Steven Turley, at least five hundred ad hoc combat groups.

But these groups have no national network. Instead, individual leaders run their own missions where they think they can do some good. One such group moved into Kinney County, Texas, to help beef up the Texas-Mexican border. Sheriff Brad Coe welcomed them, but wanted to make sure he wasn’t playing host to vigilantes. Thankfully, Patriots of America, the group involved in Kinney County, has an excellent reputation. After The Epoch Times reported on their Texas activities a month and a half ago, we haven’t heard a peep since. That’s good news – it means their relations with the sheriff are cordial, and they’re not hurting anyone.

In Kinney County we see a good example of militia deployment. But the Kenosha Guard Militia had a problem, not entirely of their making, but one where they needed legal assistance and did not have it. They formed out of nothing, using a social media engine. After Kenosha erupted in arson and mayhem following the shooting of Jacob Blake, the Kenosha Guard Militia deployed. Among those who deployed was a seventeen-year-old part-time resident who worked in Kenosha and wanted to defend it from the violent elements. On one fateful night, this boy, armed with an AR-15, was putting out fires. Three men attacked him, and he had to fire his gun in anger to defend himself. Result: two killed, one wounded – and the boy winds up charged with murder. Maybe you remember his name: Kyle Rittenhouse.

And not only that, but Gaige Grosskreutz, the wounded man, is suing the Kenosha police. Why? Because the police allegedly called the militia in, or at least let them patrol when they wouldn’t have let black armed men patrol. That last claim probably is without merit. But: whiskey tango foxtrot was the staff judge advocate, or somebody schooled in the law? Why did they let an underage volunteer go into a hot zone, with or without a weapon to defend himself? Why did they let the enemy catch them flatfooted, in the arena they still control, which is the courts?

Even worse, are false-flag pseudo-operations. That’s what you call it when the government itself stages an operation while pretending to be something else. We saw a hint of this back in 1967, in a TV pilot called Shadow on the Land.

A Nazi-like regime takes over the United States, and prepares an operation to pretend to be freedom fighters while knocking out a power plant to trigger a cascading blackout. And we saw it again, in the 1983 theatrical movie Blue Thunder.

In that one, the federal government builds an Air SWAT helicopter gunship, then sends people into the ghettos and barrios of Los Angeles to stir up riots, just to have an excuse to send their Air Swat helicopter gunship to “quell” it.

The only reasons these plots fail, is that in each case, an officer with a conscience steps up to stop it. News flash! We cannot count on that today. The FBI is full of bully-boys, and you can’t tell them apart anymore from the Internal Security Forces in Shadow. And the government is purging the military with its vaccine mandate – and I’ll have more to say about that later. The problem is: we can’t tell our friends apart from those who pretend to be our friends, and go out and do atrocious things. And the reason we can’t, is that no one has the job of authenticating and coordinating legitimate militia forces. That’s what an Operations Officer does – and we don’t have one.

Lack of unity – and loose cannons

Do you see what I mean? You have disparate groups, most of them completely ad hoc, running missions of their own, on their own. Some of their leaders have no concept of operational planning. And – this is critical – some of them have no such thing as a staff judge advocate or even a non-militia lawyer to advise them.

You’ve heard me use that term judge advocate before, so let me explain who such a person is. A judge advocate is a dedicated military legal officer. He may prosecute or defend in a general court-martial. But in the militia, the term judge advocate must include someone who advises members before they get into trouble, and helps get them out of that trouble. The term must also include lawyers who sue the federal government, and State and local governments, when they violate the Constitution and individual rights. We call this sort of activity lawfare – warfare at law. That is what judge advocates in the militia do.

Again, I said before: elements of a Judge Advocate General’s Corps already exist. The Judge Advocate General would, of course, be the Grand Legal Eagle of the militia. And today – no such person exists. If the cases of Wisconsin v. Rittenhouse and now Grosskreutz v. Kenosha, teach us anything, they teach us this. The militia needs to fill that office yesterday.

Remember that I’ve already talked about the JAG Corps and the Signal Corps in my earlier article.

That article lists all the elements of JAG and Signal Corps, and tools an individual can and should use.

But now I want to talk about another sorely lacking militia command: the Medical Corps. In any conventional combat situation, the Medical Corps performs one obvious function: battlefield medicine. Today the closest thing the militia has to battlefield medicine is the equivalent of Boy Scout first aid. I am a former active Eagle Scout, so I know what Boy Scout first aid can do. It starts with arterial-bleed cases (including, God forbid, applying a tourniquet), Basic Cardiac Life Support, and internal poisoning. The usual training goes on to cover fractures and heat-injury management. Now the Scouts have a Wilderness First Aid program, that covers managing severe injury while “roughing it” in the boonies.

But it can go only so far. When the shooting starts – and folks, it could start at any time – the days of telling people not to set a broken bone, because that’s the doctor’s job, are past. I have no reliable information on any training program in battlefield medicine. Nor do I know of anyone trying to set up evacuation hospitals, field hospitals, or aid stations.

But we have other problems, even before we get to the need for battlefield medicine. The biggest problem is that the militia has no Surgeon General. Such an officer would have charge of training in battlefield medicine and first aid in a hot zone. But he would also have charge of investigating some very serious public-health mysteries on which we cannot trust the authorities.

The most pressing such mystery concerns COVID. What it is, where it comes from, and how to guard against it. Another part of that mystery concerns the vaccines. If you read my site regularly, you know my position on any COVID vaccine:

Follow this link to everything I or any other contributor has written about the vaccine.

I assure you, I will have more to come. Besides being a former active Eagle Scout, I also have my medical degree. I have heard this worst-case prediction from Dr. Luc Montagnier, that appeared in Natural News on May 25, 2021. (Link in the description.) He said everyone who takes that jab will die within two years!

More recently, as you know, Dr. Steven Gundry reported on Protein Unstable Lesion Syndrome results. If you take the jab, you multiply your risk of a heart attack two and a half times.

I have another public-health mystery about which we cannot trust the government: chemtrails. You won’t find anything about chemtrails on the pages of CNAV, because I can’t make head nor tail of it. But Joseph R. Mercola once has plenty to say, until some authority or authorities made him burn twenty-five years of his content. He reported seeing a lot of cases of heavy-metal poisoning, and no ground source to account for it. Like many people, he looked up in the sky, and saw vapor trails from high altitude jet aircraft. Most such vapor trails, or contrails, are fluffy white, like the clouds. But now and again you see one spread out and displaying all the colors of the rainbow.

Can you normally expect to see that? Or is someone deliberately fouling our air with heavy metals and particulates, trying to kill us all? The main problem with that theory is that you would need the cooperation of the airlines, as well as the Air Mobility Command of the U.S. Air Force. Equally likely, those jet engines are showing their age and polluting the atmosphere just from normal operation.

The militia needs a unifying command – and a Commandant

I am now speaking to any of a number of generals and admirals whom “President” Barack H. Obama sacked during his term. You know who you are; I don’t. As far as I know, the American Patriotic Militia has no commanding general, or Commandant. I am calling on you, right now, to step forward, and say,

Follow me. I command the American Patriot Militia. I will address the disgraceful lack of coordination between and among militia combat groups, and appoint appropriate staff to provide that coordination.

One of you. The rest of you need to make up your minds to get behind whoever among you will show some initiative and take responsibility. You all know the phrase I’m going to quote. Unity of what? Say again, I can’t hear you … right! Unity of command! Even one bad general is better than two or more good generals who argue. So, don’t!

And what do red-blooded Patriots need from their Commandant? Direction. Organization. That means appointing the right people to all the staff positions:

And above all: coordination! We cannot have anyone calling himself part of the militia, going off half-cocked! Coordination, investigation, preparation (including training), and action – lawfare preferably, combat when necessary. That’s the burden of the militia command.

The Patriotic Revolution – a manifesto

[…] We come at last to the “real meat” of this article: how to detoxify your body against COVID spike protein (however it gets into your system) and where to get the materials you need. This kind of information will be extremely valuable to the Medical Corps of the American Patriotic Militia. […]