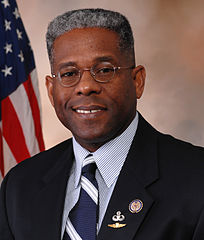 Lt. Col. Allen West USA (retired) offered himself as a candidate for Governor of Texas last July. (Here is his campaign site.) At the time, Gov. Greg Abbott (R-Texas) held a commanding lead. No longer. Not only has Gov. Abbott lost more than half his vote share, but Allen West now polls higher than he does.

Back in July of 2021, a two-way poll between Greg Abbott and Allen West showed Abbott beating West 73-17 percent. 10 percent of voters in that poll were undecided. But the polling company determined that 71 percent of the “undecideds” leaned Abbott over West.

What a difference six months makes! Clash Daily reported today on a poll of 447 likely Texas Republican primary voters in the Governor’s race.

And here is what they found:

One can readily see that Allen West has taken the lead, though not a majority lead. If the primary ran today, it would end in a runoff – with Allen West still in the lead.

Joe Biden, that’s what happened. As Clash Daily explains it:

But now that the state is facing some serious crises and an administration that is openly hostile to Texan values and best interests, who should Texans look for to stand up for Texas?

Someone whose biggest play is running to the courts every time Biden throws Texas under the bus, hoping a friendly judge will (eventually) grant us relief?

Or do Texans need something more?

In September of 2021, Allen West appeared before Tucker Carlson on Fox News Channel. There he called Gov. Abbott out on failure to use the Texas National Guard effectively. Then hetold Tucker how he would secure the Texas border.

Nor has he stopped there. After the poll ran, West called out the Governor for lack of leadership concerning suicides in the Texas National Guard.

So perhaps he commands a higher lead today. The more reason why he should be Governor (or President!) of Texas.

CNAV is proud to note Allen West’s back-link to this article. See it and other similar articles here.

Attorney General Merrick Garland says Jan. 6th investigation will last ‘as long as it takes’ for ‘justice to be done’