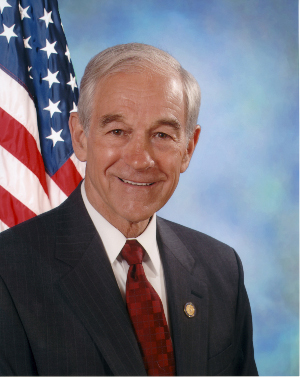 Ron Paul, the gadfly of the GOP in Congress, wants to be President. But the Tea Party might be split on whether they like him.

Representative Ron Paul (R-TX-14) announced officially this morning, on ABC-TV’s Good Morning America program, that he is a candidate for the Republican nomination.

The time has come around to the point where the people are agreeing with much of what I’ve been saying for 30 years so I think the time is right.

He has been saying for 30 years, among other things, that:

About that last part: Ron Paul ran in 1988 and 2008 on much the same sort of platform. In 2008 his campaign failed, largely because he allowed “Truthers,” people who say that the US government itself (or, in another version of the myth, Israel’s Mossad), and not Osama bin Laden and his “Base” (Al-Qa’ida), destroyed the World Trade Center, to join his campaign and movement. Ron Paul never spoke a “Truther” message, but he did suggest that the American people had no one to blame but their own government for having troops all over the Arabian Peninsula in the first place, and for no good reason, and for meddling in Arab civil affairs, and Arab wars, that are none of America’s business. But a large group of people shouted the “Truther” message while also saying that Paul was their candidate. This ruined Ron Paul’s reputation, and he never recovered.

But since then, Ron Paul has talked mainly about the government’s shaky finances, not about war and peace. He has said more about war and peace lately, only because President Barack H. Obama has turned out not to be the anti-war President that so many expected him to be. Paul seems to be disappointed in that. He says that he would never have ordered the raid that killed Osama bin Laden, that the raid was against international law, and that the US should still call its troops home.


Furthermore, Ron Paul wants to stop all financial and other aid to other countries, including the State of Israel. Israel receives more foreign aid than any other country except Iraq. Israel also votes with the USA nine times out of ten at the United Nations. No other country that gets foreign aid comes close.

This “On the Issues” page scores Ron Paul’s statements and votes over his career in Congress. Their summary is that Ron Paul is not a conservative, but a libertarian. The one foreign-policy question in that score is “Should the US get out of Iraq?” Ron Paul’s statements and votes make clear that he wants out, and he gets 5 points out of 100 on the “social liberty” scale for that stand alone. (On the Issues takes three points away from him because he believes that abortion is murder, and that women have no right to seek it.)

But Ron Paul has said a few other things that have made conservatives angry. In August of 2010, he said that the opponents of the “Park 54” project, or the “Cordoba House,” or the “Ground Zero Mosque,” were “beating a drumbeat of hatred” against Muslims. Some Tea Party activists on the on-line Patriot Action Network are furious with some of Ron Paul’s supporters for suggesting that Paul “started” the Tea Party movement. (In fact, MSNBC anchor Rick Santelli started it by saying that it was time for a Boston Tea Party-style protest against high taxes and spending.)

Here is a selection of books by and about Ron Paul:

This thread shows the split among Tea Party activists about Ron Paul. Half the respondents cheer his sound-money politics (though some wonder whether having Congress supervise the Federal Reserve directly will do any good). The other half find him “weak” on foreign policy and too friendly with Muslims.

The foreign-policy issue will be a big problem for him. His announcement comes during the season of Remembrance Day, Independence Day (Yom Ha’Atzmaut), Victory Day, and Jerusalem Day in Israel. Worse, Obama and the United Nations are getting ready to propose a Palestinian “state” and a divided Jerusalem. An armed uprising in the West Bank and Gaza, and maybe even another Arab-Israeli War, could break out any time as the “Arab Spring” encourages disgruntled Arabs to find their voices. Some of those voices have called openly for another war. (The Arabs have fought several wars with Israel, and lost them all.) And many of Paul’s supporters have blamed Israel for all the trouble in the Middle East and blamed America for provoking Osama bin Laden to act (or framing him for an act that the government did itself).

But nearly every conservative and Tea Party activist can rally around his domestic policy messages. They agree that the government does too much for too many. (Some say that the government does things to the people, not for them.) Tea Party activists do wonder what happens at the Federal Reserve, which actually is a private company, not a government agency. Many of them also have started to buy gold and silver, and have been expecting the dollar to collapse, Weimar-style, at any moment. (That it hasn’t is only because the “petrodollar system” has propped the dollar up for nearly 40 years; see here and here.)

How Ron Paul handles the foreign-policy questions that reporters and voters are sure to ask, will decide whether he wins or loses. In 2008 he got only 5 percent of the vote, largely because most Republican Party voters thought him unpatriotic. He must change that impression of him if he hopes to win.

This is the ONLY guy worth voting for. We’d have a real game-changing ticket, if either Roy Moore or Michele Bachmann became the VP.

I beg to differ. Ron Paul is far too old, and would not be able to hold the federal government together, by his own choice.

Gary Johnson would assure the Republican party victory over Barack Obama. His polices of fiscal responsibility would be a harsh awakening to the rest of the country. As governor of the New Mexico he ran the state as a business, and the state never did better. He vetoed more (spending) bills in just his second term than all other governors did combined.

His stance on legalizing marijuana would make for billions in tax dollars, substantially decrease the number of non-violent offenders in our prisons, and most importantly of all, this would cleave the democrat, liberal base in half. Obama would have to promise legalized pot, gay marriage, free health care, and subsidized gasoline just to keep the democrats voting for him. Gary Johnson’s biggest impediment is the religious right. If they could accept his eccentricities and libertarianism, he would crush Obama worse than Reagan crushed Carter.

Johnson endorsed Ron for President. Ron is a Christian as well as a doctor. Johnson is also for passing a state bankruptcy law. I do like the fact that he canned 1200 state employees though. If he could do the same in Washington, things might be on the rise for him as VP to Ron!