Atlas Shrugged, Part 2, will shortly go into production, The Atlas Society announced yesterday. It will release in October of 2012—squarely in the middle of the election campaign. The timing could affect the dynamics of the campaign and the movie’s box-office receipts.

The Atlas Society announced on February 2 (Ayn Rand’s birthday) that Atlas Shrugged, Part 2 got the last of its funding. Shooting will start in April of 2012, and will take place in Los Angeles, New York City, and Colorado. 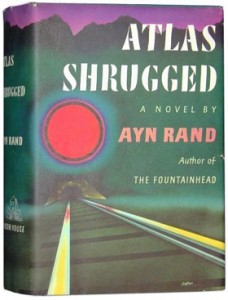 The film will tell the events of the second part (“Either-or”) of the original novel. Those scenes take place largely in New York City and Philadelphia, with a brief scene in up-State New York. But the novel also has more action-adventure-oriented scenes. Two of them:

In addition, Dagny Taggart, the main heroine of the saga, will try to follow the elusive John Galt into a boulder-strewn valley in the Rocky Mountains. In the process she will lose power and go into a tailspin. That is how the original second part ends.

The Atlas Society seems to feel that Part 1 had too small a budget and only word-of-mouth promotion. So this time they have raised a million dollars for promotion alone. They also plan a summer seminar to get the message out early and further drive up viewership. Rumors, furthermore, say that the producers have re-cast every role.

Electioneering in the movies?

The timing of the latest Atlas Shrugged release is no accident: October of 2012. The Republican National Convention will be not much more than a month past by then. Perhaps, if not for the decision of the US Supreme Court in Citizens United v. Federal Election Commission, a court might have ordered Atlas Productions to delay release until mid-November. (That might seem appropriate, actually. Henry Rearden, the other major hero, must stand an administrative-court trial on a date shortly after Thanksgiving in that year.)

The critics are already trying to downplay the timing of an election-year Atlas Shrugged release. That act alone shows how much they fear it. As well they should, because Atlas Shrugged finds many parallels today. In 2008, the American people elected “Mr. Thompson” in Barack H. Obama. He in turn appointed “Wesley Mouch” in Cass Sunstein, and “Floyd Ferris” (or maybe “Robert Stadler”) in John Holdren, He also befriended “James Taggart” in either Warren Buffet or Jeffrey Immelt, and has plenty of “Orren Boyles” as the CEOs of Solyndra and other such companies. Furthermore, this installment of Atlas Shrugged treats the most outrageous violation of human liberty in the entire novel: the release of Directive 10-289. This “Executive Order” freezes hiring and wages, and confiscates intellectual property in all but name.

Any movie that treats these personalities and subjects cannot fail to be an electioneering project. If the novel Atlas Shrugged did not have an original release date of 1957, it might as well have the title Barack Obama: The Movie (like Hillary: The Movie, the original project of Citizens United that started all its legal troubles). If Atlas Productions casts a black actor as Mr. Thompson (as they did originally for Eddie Willers), no one will be able to miss the metaphor. And then the complaints about Citizens United will start anew, and people will flock to this movie if only to see what the fuss is about. A professional public-relations consultant couldn’t manage this pre-release campaign better.

In sum, Atlas Shrugged, Part 2 promises to have many people breathlessly waiting to see it. Now Atlas Productions must see that they do not disappoint these viewers.

Atlas Shrugged all too feasible

I think it’s worth mentioning how poorly Atlas Shrugged Part 1 did at the box office, an indication that the minority of people sharing the warped, perverted and disgustingly selfish worldview promoted by Rand followed the philosophy of the novel and refused to support something that was not of the greatest conceivable quality.

Keep it up. You’re only creating that much more “fuss.”

I suggest it’s poor showing at the box office was more due to people such as myself; interested in the film, but not having heard when it was released. I’ve subsequently seen it on DVD, but plan to watch more carefully for the theatrical release of part two.

What in God’s name does “fuss” have to do with success? Are you saying that enough controversy surrounding this picture will somehow drive its box-office receipts up? On what planet will people (LOTS of people) see a movie because it dramatizes a political viewpoint disparaged by those with whom they disagree?

The fact is that the original project was not a success, artistically or financially, and continuing on ironically negates the entire point of Atlas Shrugged as I understand it (basically, success is driven by self-sufficiency.) By Rand’s own standards, shouldn’t filmmakers who produce a financial failure be kept from ever working in the industry again?

“Fuss” brings publicity, and all publicity is good publicity. You shock and astonish me by demonstrating that you do not instinctively “get” this.

By asking if film makers who have lost money should be KEPT from making another, you display the fact that you absolutely do NOT understand. If they wish to risk their resources, whether for profit or any other motive, the resources are theirs to risk. It shouldn’t be up to others to tell them they cannot take those risks. Sometimes it takes near countless failures before a success. Even by the end of part one, you should be able to see the inclusion of this theme, in Rand’s book, or the movie made on it. I won’t put a spoiler here, but the end of part one of the movie seems to be in direct conflict with your supposition about Rand’s message. Not every venture requires a profit. But those who make the ventures should not be kept from the benefits, whether profit, or some other achievement.

I have a degree in film theory so I instinctively understand that never, in the history of the art form, has a sequel ever been produced for a film that lost 75 per cent of its production budget. I’m not saying the film won’t get made, I’m saying the people making it are either unbelievably foolish or stubborn to the point where they are willing to flush millions and millions or dollars down the toilet to produce a product that does nothing but massage their sickening ideological fantasies.

If any publicity was good publicity than every single Hollywood movie ever made, which typically get promotional budgets alone in the tens of millions, would be a success and this is quite simply not the case.

When you have an idea like this one, it tends to make you stubborn.

Did they ever release a DVD of the first film?

Though I’m far from being pro-ojectivist by any measure, I’m still curious to see the film and form my own opinion.

If you scroll up to the Amazon Carousel Widget, you’ll see several editions of Atlas Shrugged offered for sale. That includes a DVD, a Blu-ray, and even an Amazon Video Stream. Take your pick.

[…] As to “multiple investigations” of Sheriff Arpaio for “being a racist”: When a law-enforcement officer enforces a criminal law that members of a certain race happen to break in numbers out of proportion to their numbers in the population, that is not racist. Si usted no puede hacer el tiempo, no cometa el crimen. Furthermore, the commenter should ask why the Attorney General of the United States has implicated himself in a deliberate scheme to “throw down” assault weapons in Mexico to justify, or excuse, “gun control” in the United States. That Attorney General should look at Sheriff Joe, then look in the mirror, and then ask himself whether Sheriff Joe could ever think that his own moral stature is at the mercy of the actions of Eric Holder or anyone else in the Obama administration. (With apologies to Ayn Rand.) […]