The New Jersey Administrative Law Judge who dismissed the latest Obama eligibility case seems to have made a new, special law for Presidential primaries in New Jersey. According to this law, anyone can nominate anyone for President in a major party primary. The nominee need not agree to let someone nominate him, need not qualify to be President, need not be a citizen (natural-born or otherwise), and indeed need not even be real. This makes no common sense, and the Secretary of State instructs Presidential candidates otherwise. For that reason alone, CNAV calls on the Secretary of State to overrule her Administrative Law Judge and stop Barack H. Obama from appearing on the New Jersey Democratic Primary ballot.

Yesterday, from 9:20 a.m. to 12:30 p.m. (with a ten-minute break), they had their hearing. And at that hearing, the Obama campaign’s lawyer, Alexandra Hill, said something incredible: that no candidate for President has to produce any document to show that he or she qualifies to be President. In so saying, Hill closely paraphrased the three bandits in the film The Treasure of the Sierra Madre. As any fan of Humphrey Bogart’s films knows, Bogart’s character meets the bandits, who claim to be lawmen, and demands to see their badges. The bandits tell Bogart’s character:

We don’t need no badges! We don’t have to show you no stinkin’ badges!

They say that, of course, because they have no badges. Neither does Barack Obama seem to have a birth certificate. Alexandra Hill offered none (and said that the PDF document that the White House served up to the Internet is not relevant).

Mario Apuzzo, in his opening remarks, told Administrative Law Judge Jeff S. Masin that New Jersey election law says that a candidate must show that he or she qualifies for the office. NJSA 19:23-7 clearly says:

Accompanying the petition, each person indorsed therein shall file a certificate, stating that he is qualified for the office mentioned in the petition, that he is a member of the political party named therein, that he consents to stand as a candidate for nomination at the ensuing primary election of such political party, and that, if nominated, he consents to accept the nomination, to which shall be annexed the oath of allegiance . . .

That law governs primary elections for any office except that of President of the United States. But NJSA 19:25-3 says that a candidate need not consent to accept the nomination, and may not have a slogan appear with his name. But in every other detail, a Presidential primary nominating petition must conform to all other requirements of law. A straightforward read would mean that, whether he consents to stand for nomination or not, he must still certify that he qualifies, and that he is a member of the party that the petition names.

Obama did not so certify. That was why Purpura and Moran objected. That is the basis of their Obama eligibility challenge. And Obama’s lawyer said baldly that he does not intend to certify. 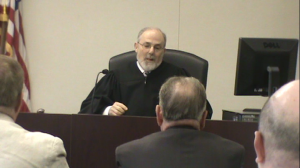 A judge should read the plain sense of the law. Judge Masin did not do this. Instead he seized upon the part of the statute that says that a candidate for President need not consent for a petition to be valid. On that basis, he said that where the law does not require consent, it cannot at the same time require certification.

That statement alone is utterly without foundation. How shall a voter know whether any candidate on the ballot qualifies or not? That’s why States have Secretaries of State and Divisions of Elections.

In the case of the presidential primary, where the person or persons indorsed need not consent to being indorsed by the petition, N.J.S.A. 19:25-4 authorizes such a person indorsed without consent to “decline in writing, filed in the office of the Secretary of State, to have his name printed upon the primary election ballot as a candidate for President, the Secretary of State shall not so certify such name.” It could be assumed therefore that if a person so indorsed knew that he did not meet the Constitutional requirements for the office, he would decline, thus leading the Secretary to not certify his name.

In other words, the candidate’s word alone is enough. And not even an expressed word, but an implied word. Silence gives certification by this “Masin Rule.” Here, then, is how Masin’s statement reads in formal logic: if the candidate knows that he does not qualify to be President, he will decline in writing. Obama has not declined. Therefore, Obama does not know that he does not qualify.

The Masin Rule, unless the Secretary of State overturns it, will stand as the most infamous product of the Obama eligibility jurisprudence. Ironically, Obama’s proxy seemed to know this. She actually said that someone could nominate Mickey Mouse, of Disney fame, as a candidate for President in a New Jersey primary. And Judge Masin never challenged that. CNAV must therefore assume that the Masin Rule also lets someone nominate a character of fiction to be President.

Will the Secretary of State act?

Secretaries of State do not usually overrule their Administrative Law Judges. But New Jersey Secretary of State Guadagno must. Judge Masin’s decision is absurd. The Masin Rule makes a mockery of the primary process, and as such disenfranchises those who vote in primaries. Guadagno should stop this insanity at once and not let anyone renominate Obama for President until he sends her office a certified true hard copy of his birth certificate. Anyone seeking a license to drive in New Jersey must show who he is. Obama refuses, and now the Masin Rule lets him refuse. This is nothing less than a travesty of law and justice.

Part of your analysis is interesting. The references to NJSA 19:23-7 and NJSA 19:25-3 and their interaction are relevant and thought-provoking. The judge’s decision in relation to that aspect is potentially open to criticism on my reading (although I hasten to add that my knowledge of New Jersey administrative law is nonexistent).

Unfortunately you go too far in the remainder of the article. Your silly reference to the “Maslin Rule” and your lampooning of the judge’s reasons is reminiscent of a child throwing a tantrum when he doesn’t get his way.

If you want people to take these matters seriously you need to take a calmer approach.

Also, are you able to tell me if Mr. Romney has complied with the New Jersey requirements in the manner that you suggest that Mr. Obama must?

Actually, if someone wanted to challenge Mitt Romney on the same or similar grounds, I would be just as interested in covering such a challenge. And I would consider it equally valid, and for the same reasons.

That no one has done so, is only because he has put his history out there for everyone to see. By every account I’ve seen, both his parents had gotten their citizenship straightened out before he was born.

Horace
Reply to  Terry A. Hurlbut

His citizenship is one thing. His compliance with the NJ law is quite another. The question is whether he has provided the certificate referred to in NJSA 19:23-7.

You stated at the very end of your reply comment to Terry, the following:

“……Also, are you able to tell me if Mr. Romney has complied with the New Jersey requirements in the manner that you suggest that Mr. Obama must?” [Your words]

Horace: The news / commentary was about Obama and the New Jersey legal case. It was not about Mitt Romney.

Finally, I don’t think that Terry’s reference to the “Masin rule” is a “silly reference” [your description]. Personally, I think that Mr. Hurlbut covered most, if not all of the bases of this news piece thesis.

Nathan, I was fully aware that the article was about President Obama. However, it seems to me that what is good for the goose is good for the gander. Has any presidential candidate complied with the NJ law in the way that Terry insists that it must be complied with? Why limit the criticism to Obama alone? Why is the same criticism not made of the other candidate? If this is such an important issue then why wouldn’t you apply the same standard to both Romney and Obama?

The reference to the “Masin Rule” is silly for two reasons. Firstly, nothing that can be properly described as a “rule” has been identified. All the judge did was to interpret a piece of legislation. Secondly, the term “Masin Rule” is used purely in order to lampoon a judicial officer who gives every appearance of doing nothing other than trying to discharge his duty in a thoughtful and conscientious manner.