Two days ago, Sheriff Joe Arpaio of Maricopa County, Arizona held yet another Obama eligibility press conference. He promised weeks ago that he would. Tuesday he showed more evidence that the Obama birth certificate document cannot be a true record. But he showed more than that. Getting a birth certificate in Hawaii, even if you were born out-of-State, is not only easy but completely lawful. That law, says Arpaio, threatens national security on its face.

Sheriff Arpaio and Detective Mike Zullo, head of the Cold Case Posse, ran the conference. They first discussed whether a modern document scanner would make a PDF file having many layers. Almost any computer user has either a dedicated scanner or an “all-in-one” that can scan, copy, print, or FAX. Many people, willing to accept the White House Obama birth certificate file as real, point out that PDF files from their scanners or “all-in-ones” always have many layers.

Zullo gave this answer: Yes, scanning a document can produce many layers. But what kind of layers? Any ordinary scan would produce a file having one 1-bit layer and many 8-bit layers. But the Obama birth certificate file has eight 1-bit layers (six of which held different parts of the text) and one 8-bit layer. In other words: all the text in a file from a document scan would sit on one layer. The background color might break up into more than one layer, but never the text.  And the six text layers seem to show changes that someone made, in the order that he made them.

Zullo also said that two different document experts, each working independently of the other, tested the Obama birth certificate document in 600 different ways. Each expert got results that said the same thing: the document is not a true copy of anything. 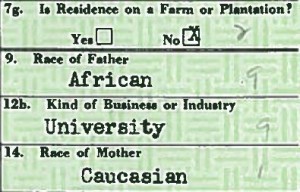 Part of the Obama long form birth certificate. Note the handwritten codes in the boxes for the father’s race and workplace. Code 9 is for an empty box, but those boxes are not empty.

The file also has several codes, that someone hand-wrote in pencil, inside most of the boxes on the form. Zullo traveled to Hawaii to try to get more answers on the ground. Hawaiian authorities brushed him off, but Zullo did track down the Hawaiian registrar, now retired (age 95), who signed documents like this in 1961. Her name is Verna K. Lee, a name consistent with a signature that looked like “U. K. Lee.” (Some wags suggested that the signature was the word Ukulele, hence a joke. It wasn’t.)

Ms. Lee confirmed that she wrote codes like that on all birth certificates that crossed her desk. 1961 was in the early era of data processing. Before anyone had magnetic disks, data processing departments stored their data on 80-column cards Typically, the registrar would convert whatever was in a box in a form to a one-digit number. A key-punch operator could then type that number in the proper column on a data card.

The picture at right shows a blow-up of the boxes that hold the father’s race and place of work. Beside the typewritten entry is the number 9. The problem:9 is the code for an empty box! It means that whoever coded the box found nothing in it, and was telling that to the key-punch operator.

Why, then, do those boxes have anything in them? Why do they show Obama Senior’s race as “African” and his place of work as “University”? African is an anachronism. Birth certificates in those days would use Negro or Negroid instead. But University would not be an anachronism. The coding system had a code for University. Why, then, did the coder not use it? Why use Code 9, the code for an empty box?

Zullo made sure of his find by asking Ms. Lee to show him a copy of the coding manual. She did.

This alone would be the most explosive find yet in the Obama eligibility case. It means that someone took a birth certificate that did not give the race or the place-of-work of the father. The Student code for the kind of work the father did is probably good; it carries Code 0, not 9. But the words African and University should not be in their boxes. Someone added those words later. Adding “African” instead of “Negroid” was probably a mistake. Only someone 42 years old or younger today would make a mistake like that. He would never remember anyone calling an African anything but an African.

But this is not the most explosive thing that the Cold Case Posse found. Zullo and his team looked up the law in Hawaii on getting a birth certificate for someone born out-of-State:

Upon application of an adult or the legal parents of a minor child, the director of health shall issue a birth certificate for such adult or minor, provided that proof has been submitted to the director of health that the legal parents of such individual while living without the Territory or State of Hawaii had declared the Territory or State of Hawaii as their legal residence for at least one year immediately preceding the birth or adoption of such child.

Note what Hawaii Revised Statute 338-17.8 says: adult or minor. So an adult can get a Hawaiian birth certificate if he can show that his parents (or one of them, at least) had been a lawful resident of the Territory or State of Hawaii for at least a year before he was born (or adopted). Note that all the person need show is that his mother was a lawful resident for a year. He need not show that she gave birth to him in Hawaii.

This alone should throw the Obama eligibility question wide-open. How can a Hawaiian birth certificate prove that anyone was born in Hawaii? Sheriff Arpaio seemed to have a hunch that someone would ask that. He pointed out that no person could ever get an Arizona birth certificate on such flimsy evidence.

But Arpaio also said that this threatens national security. It allows someone born elsewhere than in the United States to get a birth certificate from a particular State, i.e., Hawaii. Hawaii is the only State that has such a lax law. Arpaio urged Hawaii to correct that flaw. No one was willing to bet that they would.

Sadly, many of the reporters at the press conference disgraced themselves. They behaved more like college students heckling a guest speaker they disliked, than like journalists covering a story.

How do you expect any of us to believe any of this?

You never found a conspiracy theory you didn’t like!

These two sentences were typical, and set the tone for what followed. At least one reporter tried to suggest that Mike Zullo lied about how long he had held a private detective’s license in New Jersey, before he retired to Arizona. Sheriff Arpaio shot back:

Do you want to [ask about] my credentials? Fifty years in law enforcement!

If this were a real investigation, you would be saving this for a judge and jury or a prosecutor.

But the reporter never asked who would investigate Obama eligibility as a criminal case. Arpaio had an answer for that, too:

Although I am having a difficult time deciding who to forward this information to given the fact that the obvious choices report directly to the president, I cannot stand by and hold on to information that threatens to weaken national security.

Arpaio repeated one thing he said in his March 1 conference. He has no grounds to suspect that Barack H. Obama himself either forged the document, or ordered someone else to forge it. But he can show that someone did forge it. That he doesn’t send his information to the putative President is because Obama has an obvious conflict of interest. He would like to send it to Congress, but as Zullo said:

We’ve been told from behind the scenes that nobody in Congress wants to touch it.

Nick Purpura is one of many who filed Obama eligibility challenges in their own States. He told CNAV today:

I cannot understand why Congress will not investigate this matter. Here we have somebody, who is not an Article II natural born citizen, who offers an obvious forgery to try to show that he is eligible. Why no one in Congress will remember their Constitutional oath of office is beyond me.

UPDATE: On July 23, the site RightPlanet.com carried this link to the first interview of Mike Zullo by a major media outlet. The six-minute segment, an interview with Zullo on the ABC-TV affiliate in Phoenix, is embedded below. Zullo explains the coding errors in detail, and the out-of-sequence certificate number (top right).

Obama eligibility: Arpaio in the clear - Conservative News and Views