The Obama eligibility affair went international yesterday. A scientific institute in Israel analyzed the long-form birth certificate document. They found, as many others have done, that the document is a forgery. They also severely criticized the American Congress and courts for not acting on, or even investigating, the Obama eligibility issue.

Putative President Barack H. Obama released this PDF document on April 27, 2011. He offered it as a copy of his long-form birth certificate. As WND‘s Jerome R. Corsi reminded his readers yesterday, several persons, both amateurs and document experts, have looked at the document since then. Most famously, Sheriff Joe Arpaio of Maricopa County, Arizona, asked his Cold Case Posse to look at it. They found, as earlier investigators did, that the document looked bad—like a forgery.

Israel Science and Technology is the national clearing house of science and technology information in the Republic of Israel. It also covers achievements by Jewish scientists and science students worldwide. Its founder and administrator-in-chief, Israel Hanukoglu, Ph.D., was once the science adviser to Prime Minister Benjamin Netanyahu.

IST does not say when they decided to analyze the Obama birth certificate document. But they do say why. The Obama eligibility controversy raged in the United States for two years before Obama released that document. (CNAV has its own copy.) Two years is a long time to let a controversy fester before taking a step to satisfy your critics. IST decided to check it out. Yesterday they published their findings.

Most of the amateur and professional investigators used Adobe Reader or Adobe Illustrator to check the file. The Israelis instead used a free-download version of the Foxit PDF Reader. They then used an open-source graphics program called Inkscape (now in version 0.48.1). This program is available free-of-charge as a Windows installer, an Ubuntu package, and a source “tarball” (a product of UNIX’s Tape ARchive program). Inkscape works with the vector graphics (.SVG) image format.

IST gave full instructions on how to run the same tests they ran. CNAV ran those tests on its own equipment (Windows 7). To test with Foxit, one loads the document and zooms in on various parts, using the Marquee Zoom tool. At high magnification (800 percent or more), the final digit 1 in the serial number (10641) turns into a mass of blocky pixels. Furthermore, those pixels have different shades of gray. It still looks like a digit 1, but the rest of the serial number still shows in solid black. IST said that the last digit simply vanished. CNAV could not duplicate that effect. But why should the last digit resolve to blocky pixels, while the rest of the number shows up in solid black? (CNAV has noticed this effect before when testing with Adobe Reader.)

That isn’t the only problem with badly resolved characters. The misspelled word “TXE” still shows up above Alvin T. Onaka’s whimsical signature. (Whoever signed that document in Onaka’s name added curlicues to the letter A, strokes that looked like an eye, a nose, and a mouth.) But the letter X also becomes a mass of pixels, in different shades of gray. Other characters, scattered throughout the document, show the same effect.

The test with Inkscape shows a more serious flaw. With Inkscape, anyone can verify that the document has nine separate objects. To resolve the objects, one must “ungroup” them three or four times. Then one can move the objects apart from one another. 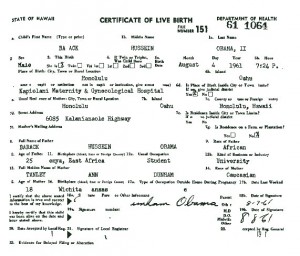 This rectangle holds most of the content, but not the background, of the Obama birth certificate document. Note the missing digit 1 in the serial number, the missing R in Barack Obama’s first name, the missing S in Stanley Ann Dunham’s name, and other missing characters and other pieces. Photo: CNAV (see text).

The object at right holds most of the content. The serial number (below the words “Department of Health”) has lost its last digit 1. Barack Obama’s first name has lost the letter “R.” Stanley Ann Dunham’s name has lost its letter “S.” Several check boxes and other elements also do not show up, as they do on the fully assembled document. The first part of Stanley Ann Dunham’s signature is also missing.

A second object holds the safety-paper background and most of, though not all, the missing characters. (The safety-paper background has white “holes” in it where other text objects come to rest.) A third object holds Alvin Onaka’s “certification.” Six other objects hold various pieces of information. They include a word “None” and parts of the two dates that should be rubber-stamp products.

IST repeats a common argument among Obama eligibility investigators: a photocopy should not show as separate parts, but as one object. This, says IST, is especially true of vector graphics.

CNAV notes some confusion. IST says that the file should show as a “group of 2 objects.” CNAV found a “group of 1 object.” But after ungrouping three times, CNAV got the nine objects that IST had found. Other Obama eligibility investigators have found the same number of objects, of the same kind.

What this means to Obama eligibility cases

Nick Purpura, of Wall Township, New Jersey, still has an Obama eligibility case in New Jersey’s court system. At last report, the Supreme Court of New Jersey won’t say whether they will hear an appeal or not. Purpura had not heard of the Israeli analysis at posting time. When CNAV contacted him, he deferred comment until he had shared the news with his attorney, Mario Apuzzo of Trenton.

IST’s article ended with links to the other Obama eligibility investigations of the birth certificate document, and their results.