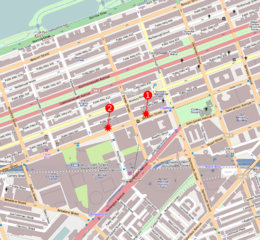 On the day of the Boston Marathon Bombing, a certain Saudi national ran from the scene and landed in the hospital with bad burns. At first he was the only “person of interest.” Then authorities searched his apartment and then pronounced him “clean.” And on Wednesday night came word that authorities will deport him, perhaps tomorrow. On national security grounds.

The Immigration and Customs Enforcement service (ICE) vehemently denied that they would deport Abdul Rahman Ali Alharbi to his native Saudi Arabia. But a Capitol Hill source said ICE was lying. That same source said ICE had a file on this Saudi national, with information suggesting the government should revoke his visa and send him packing.

Over the weekend, Glenn Beck said he had even further information on Ali Alharbi. And if the government does not reveal it today, he will.

Who is this Saudi national?

We don’t know who this Saudi national is, beyond his name, and that he came to America as a student. He first came to official attention on the day of the Boston Marathon Bombing. Someone saw him running from the scene. Medics took him to Brigham and Women’s Hospital with burns on his legs. And before the day was over, authorities announced he was a “person of interest,” and was under heavy guard.

Four days later, of course, an independent, ad hoc team of researchers, all users of Reddit.com, would “make” the Brothers Tzarnaev as the two who left the bombs at the eventual blast sites. The FBI would confirm that half an hour later. (The Blaze suggests the FBI did that because Reddit had already put their mugs out there for all to see.) If Ali Alharbi had played any direct role in leaving the bombs, the Reddit team and/or the FBI would have spotted him. No one did. Authorities got a warrant to search his apartment. Officially they said he was OK with that. Then they said he was “clean.”

ICE denied flatly that they were going to deport Ali Alharbi. They said they had another Saudi national. Was someone mistaking the two identities?

But on Thursday evening, The Blaze had reports from sources saying in effect that ICE is lying. The FBI had discussed this Saudi national’s case with other agencies. The FBI considered Ali Alharbi a material witness and did not want to lose him. But ICE was determined, or had orders, to get him out of the country. Fast.

And why did Michelle Obama visit Ali Alharbi at “The Brigham,” as the Saudi daily Okaz reported? Walid Shoebat picked that up, and WND picked it up from him. Shoebat summed up about plans to deport the Saudi national and officials denying them:

In light of recent reports that Alharbi was scheduled for deportation on ‘national security grounds’, the first lady’s visit takes on much added significance if those reports are true. We already know that the Alharbi clan consists of multiple Al-Qaeda members. This would seem to bolster the claims of scheduled deportation, not claims to the contrary made by the likes of DHS Secretary Janet Napolitano, who actually never really answered the question; she just got rankled and blew it off.

Then Brietbart News’ Elizabeth Sheld had this report: ICE officials altered his orders. They will not “deport” him, but merely let him leave.

Why is the government acting this way?

By all appearances, the government will politely let this Saudi national leave. In fact they will spirit him out of this country like a carrier of typhoid fever. If he had nothing to do with the Boston Marathon Bombing, other than getting burned in the blasts, why give him all this attention? And what did authorities turn up when they searched his apartment?

The House Committee on Homeland Security wants to know. They demand SecHomeSec Janet Napolitano tell them, behind closed doors if she has to. They also confirmed to The Blaze that someone did change the order to deport the Saudi national, and they have copies of the orders as they first went out.

Glenn Beck, owner and publisher of The Blaze, is not satisfied. (Clip Two, go.) Drew Zahn at WND quotes Beck:

That quote is correct. Here’s another from the video: “I don’t bluff. I make promises.”

The Bush administration treated several Saudi nationals, members of Osama bin Laden’s clan, the same way: spirited them out of the country after the Nine-eleven Incident. Why? Why this special treatment for Saudi nationals?

Could this have anything to do with the Petrodollar system? Recall: the world takes US dollars for oil, and buys US bonds with it. OPEC might be second only to China in its holdings of US sovereign debt. And of course this special relationship started after the United States government refused to surrender gold in return for Federal Reserve dollars.

The government must answer two questions:

[…] Beck, as he promised, today released details about the Saudi national in Boston. Those details are not flattering, either to the government or to certain media […]