‘The Kristallnacht was started by one individual,’ she said, referring to Hershel Grynszpan, a 17-year old German-born Polish Jew who assassinated Ernst von Rath, a German diplomat stationed in Paris. “It shows how a minor event in history can lead to mass destruction.” Cleveland Jewish News, Nov. 1, 2013.

Roni Berenson, a Holocaust survivor, was interviewed about Kristallnacht in the Cleveland Jewish News (CJN). Born in Berlin, she remembers being pulled out of school on the day after the violence, and she and her parents boarded the next-to-last ship that left Europe. Berenson blames the events of Kristallnacht on Herschel Grynszpan, himself a Jewish victim of the Nazi menace. 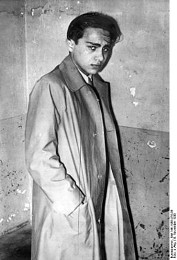 Herschel Grynszpan, was a seventeen-year-old German-born, Jewish refugee of Polish parents. He had been sent to an uncle in Paris to escape persecution, but now his parents were among many thousands of Polish Jews expelled and abandoned at the German-Polish border only to be refused entry and sanctuary in their native land. Perhaps distraught over their situation and his own, and fearful of the future, Grynszpan bought a gun and shot Ernst von Rath, a low-level German embassy official assigned to assist him. And it was this minor incident, this shooting that would be termed an assassination, that the Nazis used to justify Kristallnacht and the unspeakable brutality to follow.

History shows that German journalist, Wilhelm Marr, coined the term “antisemitism” in 1879, in his published pamphlet, “The Victory of Judaism over Germanism,” pronouncing it a science rather than the more precise Judenhass, or Jewish-hatred. After his next pamphlet in 1880, “The Way to Victory of the Germanic Spirit over the Jewish Spirit,” he founded the League of Antisemites, the first German organization dedicated to oppose the alleged Jewish threat to German culture, and force the Jews from Germany.

By 1920, The German Workers’ Party became the National Socialist Workers’ Party, aka Nazis. It brought the right’s nationalism and the left’s socialism together against big business, the middle class, and capitalism, shifting to antisemitism and anti-Marxism in 1930. The Party advocated a “master race,” to exclude or exterminate Jews, homosexuals, Romani, blacks, the physically and mentally handicapped, Jehovah’s Witnesses and all political opponents.

Within a few short years, Germany had lived through The Great Depression, the Weimar Republic’s collapse, and the surge of unemployment. The rise of Hitler’s Nazism was established by 1921, with Hitler’s appointment as party leader, followed by his appointment as Chancellor of Germany in 1933, and establishing his totalitarian regime, the Third Reich. The Nuremberg Laws were introduced at the Party’s annual Rally in 1935, when they legally defined who was Jewish in order to legislate against German Jews’ basic rights, which eventually extended to other untermenschen (subhumans).

Date of Kristallnacht: no accident

Adolf Hitler planned the pogrom for 10 November, Martin Luther’s birthday, following Luther’s writings of 1543, “On the Jews and Their Lies,” and the anniversary of the infamous Beer Hall Putsch of 8 November, followed by a staged march on 9 November, 1923. But that was also the day that von Rath died of the gunshot wounds and, not surprisingly, Foreign Propaganda Minister Joseph Goebbels saw this as the perfect opportunity to declare this a Jewish attack on the German people, a way to justify previous antisemitic pogroms and carnage in Germany. He announced that the German people were so outraged by the Jew’s “assassination” of a German diplomat, that they spontaneously took the law into their own hands.

Ask any American to write the date, and he’ll write November 9 or 11/9. Ask any European to write the same date and he will write 9 November or 9/11. You see, the rest of the world always puts the day first, followed by the month; therefore, the date was 9/11. The Grand Mufti of Jerusalem was and Islamists are generally great admirers of Hitler and both cultures assign particular significance to special seasons and anniversaries. Kristallnacht began on November 9 (written as 9/11) and the World Trade Center was bombed by Islamists on 9/11. I suspect this was not a coincidence, but a deliberate choice.

Yes, Grynszpan had been distressed over his parents’ and his own situation, but shooting von Rath was merely a pretext for the pogrom. While Berenson accepts the events as reported by the Nazi press, the reality is that the Nazis had entered a new radical level of violence, and the SS (Schutzstaffel) had been created explicitly, months before, as the primary organization to plan and carry out such a large-scale attack.

The Nazi Party leadership, assembled in Munich for the commemoration, chose to use the occasion as a pretext to launch a night of antisemitic excesses. Propaganda minister Joseph Goebbels, a chief instigator of the pogrom, intimated to the convened Nazi ‘Old Guard’ that ‘World Jewry’ had conspired to commit the assassination and announced that, “the Führer has decided that … demonstrations should not be prepared or organized by the Party, but insofar as they erupt spontaneously, they are not to be hampered.”

The well-orchestrated, two-day pogrom took place throughout Germany, annexed Austria, and in areas of the German-occupied Sudetenland in Czechoslovakia. Nazi party officials, Storm Troopers (SS) and Hitler Youth (SA) now had their orders. Armed with weapons and sledgehammers, they flooded the streets on cue. They ransacked 1600 synagogues, setting some afire with their worshippers inside; broke windows and doors; and looted synagogues, Jewish homes and businesses – but with commands to support the fiction of outrage at the “assassination”; to remove archives and artifacts before vandalizing synagogues; safeguard non-Jewish German life and property and all foreigners; and arrest young, healthy Jewish men, of which 30,000 were sent to concentration camps in waiting trains.

About 100 Jews were beaten to death in homes and on the streets. Thousands of Jewish homes and about 8,000 Jewish shops were vandalized and devastated. Jewish cemeteries were wrecked, tombstones smashed, and corpses unearthed and defiled. Women were raped; people committed suicide, and Jews were blamed for the pogrom and fined the equivalent of today’s $37 trillion for damage and $37 billion for clearing the wreckage. Another 100,000 victims were deported to death camps.

German college students burned censored books written by all Jews, and Christians like Thomas Mann and Mark Twain. A century before, German-Jewish poet Heinrich Heine had predicted, “Where they burns books, they will eventually burn people.”

Grynszpan did not resist arrest and immediately confessed to the crime. He was not tried or put to death in a country where death was meted out for far smaller infractions, as a trial would have exposed the government’s collusion. Rather, he was imprisoned, and spent the rest of his life in German custody and declared dead by West German officials in 1960.

Herschel Grynszpan was the patsy who took the blame for Kristallnacht. He was as much the justification for Kristallnacht as an Israeli apartment building is for Palestinian violence, and as a videotape was for the mayhem and slaughter in Benghazi.

Reprinted from Renew America by permission.

Why do we have a Medicaid program?

New Jersey before you vote part 5

“the SS (Schutzstaffel) had been created explicitly, months before [9 November 1935], as the primary organization to plan and carry out such a large-scale attack.”

Well yes. Quite a few months before, actually. A hundred and twenty-seven. The SS was founded in April 1925. And it was created explicitly as a self-defence militia, as its name “Protection Squadron” would indicate. Does the rest of your article meet the same dismal standard of historical accuracy, I wonder?