Representative Eric Cantor, R-Va.-7th, will not return to the House of Representatives next winter. He even announced today that he will resign as Republican floor leader, effective at the end of July. So no Republicans in the House are scrambling to determine who will be the next floor leader. The rest of the Republican establishment are still trying to pick their jaws off the floor. Meanwhile, everyone has his pet theory on why Eric Cantor lost his own primary. And most of those people are simply wrong.

Most commentators say Eric Cantor lost because he was too willing to compromise with the Obama administration on immigration reform. Critics accused him of favoring amnesty. David Brat, the eventual winner, mentioned the amnesty issue during his campaign. But Eric Cantor lost for more fundamental reasons than that. 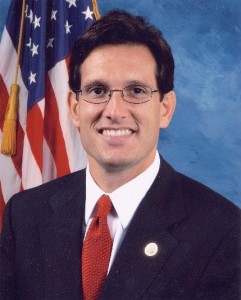 Eric Cantor developed a reputation for not relating to his constituents. He spent most of his time in Washington or on the  fundraising circuit. He seemed far more concerned with being a Republican floor leader than actually representing the interests of people living in the city of Richmond, and in the surrounding counties. Not everyone who lives in Greater Richmond agrees with that. But enough did to create a problem. And Eric Cantor never addressed that problem.

Nor was immigration the only issue where he fell out with his district. One voter, commenting on LinkedIn.com, said:

We elected Cantor because he had claimed to be a conservative Republican. I actually believe in small government, states rights, low taxes, and I donate often to charities when I can. Since 2008, Mr. Cantor has appeased the present regime rather than spoken the truth about it. We Virginians might be slow, but eventually we get it.

Furthermore, he earned a reputation for elitism. For example he spent more money on expensive steak dinners for himself and his campaign staff than David Brat spent on his whole campaign. This says as much about Eric Cantor’s sense of priorities as it says about the lopsided spending advantage that Eric Cantor enjoyed. Of course, that spending advantage did him little good in the end.

Finally, Eric Cantor lost because he fell out with the Tea Party and even conspired directly against it. He joined Speaker John Boehner and others at an infamous meeting in Florida. Ways to end the Tea Party were the chief item on the agenda of that meeting. Naturally, Tea Party activists found out about this. Two prominent conservative commentators, Laura Ingraham and Mark Levin, were determined to defeat him.

They were the only two who supported David Brat in any way.  Most people watching that primary never expected David Brent to win. No majority floor leader has ever lost his primary before. No one expected Eric Cantor to be the first.

But David Brat was not an elitist. David Brat went door-to-door, to meet with voters in Greater Richmond directly. This showed his stark contrast with Eric Cantor. Eric Cantor could not even trouble himself to campaign personally in his own district. David Brat did not have money to spend on radio and TV spots, robocalls, and steakhouses. So David Brat did the one thing he could afford to do. He met the voters directly. And so, those voters who had the energy and inclination to turn out and vote, voted largely for him.

David Brat will win election in November, so long as he understands exactly why he won the primary. He must not assume, merely because Greater Richmond has always sent Republicans to the House of Representatives, that it will send him, too. He must go door-to-door again. Aside from those voters he happened to reach, most of Greater Richmond still does not know who he is. He must tell them, and tell them he is not out to “burn the House down,” as Eric Cantor accused him.

Related Topics:candidateelectionpoliticianstaxTea Party
Up Next