The thirty-six-hour economic sanction against Israel by the Federal Aviation Administration (FAA) ended  at 11:45 p.m. last night (July 23), or 6:45 a.m. Israel Summer Time. At that hour, the FAA rescinded its ban on all travel to and from David Ben-Gurion Airport by U.S.-flag airliners. This happened only after a United States Senator called the FAA and their Obama administration masters on their true motives.

Text of the FAA rescission

Business Insider has the text of what the FAA said last night:

Before making this decision, the FAA worked with its U.S. government counterparts to assess the security situation in Israel and carefully reviewed both significant new information and measures the Government of Israel is taking to mitigate potential risks to civil aviation.

The FAA’s primary mission and interest are the protection of people traveling on U.S. airlines. The agency will continue to closely monitor the very fluid situation around Ben Gurion Airport and will take additional actions, as necessary.

The FAA did not say what “new information” it had, or what “measures the Government of Israel is taking.” The FAA knows, or ought to know, the second part. In two English words: Iron Dome.

And the “new information”? The FAA will never admit what that was. It likely came not from the executive branch, but from the legislative. Specifically, from the office of one angry United States Senator. 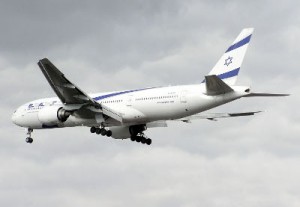 Did President Obama Just Launch an Economic Boycott of Israel?

launch[ed] an economic boycott on Israel,…to try to force our ally to comply with [Obama’s] foreign-policy demands.

Later, Cruz went further. He placed his Senatorial hold on several nominations for positions at the State Department.

until the Obama Administration answers questions about its unprecedented decision to cancel flights to Israel, while at the same time announcing continuing aid that will be funneled to the terrorist organization, Hamas.

There is your “new information”! Of course Michael Bloomberg had already said:

The flight restrictions are a mistake that hands Hamas an undeserved victory and should be lifted immediately.

And after saying that, he flew to Israel on an El Al flight. And to compound the sardonic gesture, the Israeli aircraft had this name on its nose: Sderot. The name of the most-abused town in southern Israel, where children have fifteen seconds’ warning to take shelter from incoming rockets. You can read the name in the video below.

But as before, the best advice CNAV can give to Israel is: just win, baby. Before the FAA takes another lame pretext to do this again.

Israel cut off from air?

Israel cut off from air?