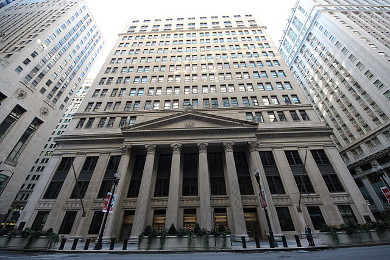 The Federal Reserve System has stood for more than a hundred years. It has in that time held the citizens and lawful residents of the United States in the gentlest kind of slavery. (For what slavery is more gentle than the kind people don’t even recognize as such?) Gentle it may be, but slavery is still slavery. And that slavery extends worldwide, wherever anyone holds or accepts United States dollars. But few realize that the Federal Reserve System is not a government entity. It is a public-private partnership. A partnership having its founding basis in fraud.

Where the Federal Reserve came from

James Corbett makes a well-documented case. In an hour-and-a-half documentary (embedded below) he narrates the beginning of the Federal Reserve. In a scene out of a movie, that history began in a private rail car with shaded windows. Corbett even names names: J. Pierpont Morgan (whose company still stands as J. P. Morgan-Chase). Senator Nelson W. Aldrich (R-R.I.), the “General Manager of the Nation” (and father-in-law to John D. Rockefeller, Jr., and grandfather to Nelson Aldrich “Rocky” Rockefeller, Governor of New York State and Vice-President of the United States).

Joining [Senator Aldrich] that evening was his private secretary, Shelton, and a who’s who of the nation’s banking and financial élite: A. Piatt Andrew, the Assistant Treasury Secretary; Frank Vanderlip, President of the National City Bank of New York; Henry P. Davison, a senior partner of J.P. Morgan Company; Benjamin Strong, Jr., an associate of J.P. Morgan and President of Bankers Trust Co., and Paul Warburg, heir of the Warburg banking family and son-in-law of Solomon Loeb of the famed New York investment firm, Kuhn, Loeb & Company. 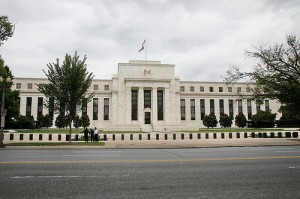 From the session in that rail car came the precursor of the Federal Reserve. Senator Aldrich would not live to see his “financial reforms” come to fruition. But President T. Woodrow Wilson (a Democrat! And, by the way, the face on the hundred-thousand-dollar bill.) would sign one (the Federal Reserve Act) into law (23 December 1913) and see the other (Amendment XVI, the Income Tax) ratified as a Constitutional amendment.

What was this plan? Literally a cartel. A cartel to control all the banks and act as “lender of last resort.” A cartel that, furthermore, could issue its own notes and have the federal government recognize them as legal tender.

When the law recognizes any money as valid for paying a debt, and forces the creditor to accept it when the debtor offers it, it makes that  money legal tender. And what is that money? It is a share of the federal public debt. The Federal Reserve creates this money through their “open market operations.” And also through the wrinkle called fractional reserve banking. According to this, a bank need not hold in reserve the full amount of the money it holds in deposit. So in essence, a bank creates money, totally ex nihilo, when it lends out more money than it has in reserve. The banks having the right to do this, are part of the Federal Reserve System.

What do they get out of it? They actually lend money to the Federal government and receive payback with interest. Mr. Corbett rightly points out the Federal Reserve Act says the system must turn all its profits over to the United States Treasury. But he also shows the tangled trail by which the ultimate owners of the Federal Reserve still skim off their portion before that happens.

But what are we to make of the trappings of government involvement? Why does every Federal Reserve Note bear the signatures of the “Treasurer of the United States” and the Secretary of the Treasury? Why do Presidents appoint members of the Federal Reserve Board of Governors? Window-dressing. In fact, “Fed” governors do not serve at the pleasure of any President. Their terms of office span Presidential terms.

Pre-history of the Federal Reserve

Ironically, the portraits on different denominations of Federal Reserve currency include figures who were both for and against the idea of a central bank. Corbett traces the history of central banking in the United States, back to the Second Continental Congress. That body tapped Robert Morris to create the Bank of North America – along the same lines as the Bank of England. (Another public-private partnership, going clear back to a war between England under King William III and France under King Louis XIV). Robert Morris was a shady character. He collected handsome (some would say obscene) profits from supplying war matériel to the Continental Army. And he sold the concept of a central bank this way: if the Bank of England helped King William stave off the French, the Bank of North America would do the same for the Continental Congress.

If that sounds familiar, it should. King Jehoahaz I of Judah reasoned similarly when he asked his high priest to copy out a pagan altar he’d seen in Damascus during his travels. (Most Bibles leave off the “Jeho” part of his name and list him merely as “King Ahaz.”)

Morris got away with it when the American people coined this sardonic proverb: “not worth a Continental.” But in 1784 the Congress under the Articles of Confederation let the Bank of North America fade into obscurity. It survived only as a private commercial bank with a Pennsylvania charter. And Robert Morris does not have his face on any Federal Reserve Note today.

The first Bank of the United States did not last forever. Aaron Burr, of course, killed Hamilton in a duel. (History presumes their quarrel had nothing to do with Hamilton’s banking schemes). Even before then, Hamilton tried to raise a “Provisional Army” for what no one will admit would have been a coup d’état during President John Adams’ quarrel with France under the “Directory.” John Adams prevented that scheme. At the cost of his political career, he made peace with the French. Thomas Jefferson (two-dollar bill) kept the United States out of war (except for Commodore Preble’s expedition to Tripoli).

I never will restore the deposits, I never will recharter the United States Bank, nor sign a charter for any other bank, so long as my name is Andrew Jackson!

Jackson did more than that: he paid off the United States public debt for the first and only time in American history.

Corbett describes the Panic of 1837, and what he calls “a series” of such panics from then to the end of the century. Curiously, he makes no mention of another disastrous war (the War Between the States), or of the “greenbacks” Congress issued to try to pay for it. “Greenbacks” were another class of funny money. They didn’t last either. But then came the Spanish-American War, over the objection (!) of William McKinley (the five-hundred-dollar bill), of gold-standard fame.

The Spanish-American War made the economy shaky to begin with. But to make the Federal Reserve scheme palatable, J. Pierpont Morgan libeled a rival firm. He hinted the finances of that firm were shaky, though they weren’t. That started a run on the rival bank, with predictable results: the Panic of 1907.

A pattern of fraud and provocation

Does anyone besides Mr. Corbett and myself see a pattern here? Actually, those in “patriotic” circles do. The same incestuous banking houses behind all these schemes, would have had a motive in provoking the War of 1812, the War Between the States, the Spanish-American War, and, more likely than not, the First and Second World Wars (especially the First) and even the “Great War On Terror.” War creates debt. Debt makes people cry for a “lender of last resort,” like the Federal Reserve. (And like every other central bank in the Western world.) This isn’t to say the underlying causes of those wars were other than what history records. But it is to suggest that private provocation would be a very simple matter for a banking-house, or its agents, to do. Mutual suspicion creates a powder keg of hate, as Edward McNall Burns and Philip Lee Ralph (World Civilizations) described it in 1965. Did a banking agent or agents light the matches? Who’s to say they didn’t or couldn’t? (Has anyone, for instance, investigated possible involvement by one or more international bankers’ agents in the assassination of Archduke Franz Fernand of the Austro-Hungarian Empire? Or in the setup of the Triple Alliance and Triple Entente who abruptly found themselves at war with one another as a result?)

Even without this, the start, and the workings, of the Federal Reserve have fraud as their basis. That much Corbett makes abundantly clear.

Fools at the table: reality check

It’s time to audit the Fed or shut it down completely. .

They are preparing for you | Conservative News and Views

[…] Every time a government has used the creation of debt effort to stimulate its economy, the results have been devastating.  Every time.  That is why this is being done here.  Not to help the economy but to destroy it.  Debt creation (Quantitative Easing), has been going on at outrageous rates, never before done anywhere in the world. Every single month, since Obama has been in office, between $50 Billion and $70 Billion of debt has been created out of thin air. […]