Now the Republican Presidential candidates begin crawling out from the progressive shadows and into the Conservative sunlight. If our country were not in such dire straights, their maneuvering and kowtowing, their side-stepping of third-rail issues, and their fear of the racist card being dealt, would make a show as entertaining as any big money Texas Holdem’ Tournament.  ​But it is, so it’s not.

Who is at the table now?

Some hide their past and their beliefs so well, that master of deception and fabrications, the undocumented one, Obama, would be impressed.  One  is posing a bluff that liberal DNA of past presidents of the same name will somehow turn out differently. Another is folding his personal ObamaCare cards quicker than an off suit, 2 and 8.  A few are not just mucking the Constitutional eligibility  cards but acting as if they were never dealt. A couple have Common Core cards face down. They are so all in on liberalism they actually believe those cards represent a great slow play opportunity.   And a few others will soon find out that dropping out with Tea Party hole cards will not get them to the final table. There is yet another who believes the winning purse, the prize money, should be backed by golden nuggets.

The gold standard is too late now 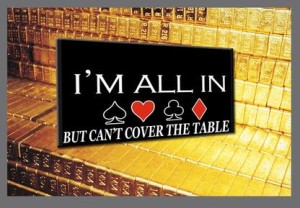 If America were a card game, which it is not, the organizers of it would understand that the value of the golden nuggets on hand, would be overwhelmed by the cash in the game.  Any candidate who cannot grasp that concept should find other work, maybe on TV or something.

So far we have heard many crazy ideas, already we have seen some pretty dumb moves. But running for President with a major campaign issue, like returning to the “Gold Standard”, clearly shows an ignorance concerning the financial death spiral this country is in. It is as dangerous to this country as Bill Clinton is to a room full of underage Latin American teenaged girls.

Gold Standard? Back the US Dollar with gold?  This is not even remotely possible.  Our debt, our spending, are so out of control the value of gold, in support of the dollar is now and will be forever, impossible.

Sometimes, a bunch of numbers and statistics create a  murkiness and tend to  lose the attention of most people.  That, of course, is exactly what the criminals (politicians) who have been raping the economic future of America, would wish for.

An effort will be made here to make this as interesting to you, as it is frightening to me, as you begin to  grasp the extent of what these selfish scoundrels  have done to us.

Why is it impossible to back the dollar with gold, which  assumes the gold which is being held in Fort Knox would be that backing?  Well, because if all the gold stored there belonged to the US Government, which it does not, the total amount is just not enough to support even a small part of the dollar.

Fort Knox has an estimated 147.2 million ounces of gold stored in its vault.  That total is about 3% of all the gold mined and owned by mankind. Some claim there is no gold there at all, and that is possible, but not probable.  But either way, it really does not matter.  Gone or there.

Gold fluctuates in value but the going price per ounce is now about $ 1, 250.00 per ounce.  That means the value of the gold in Fort Knox is about  $184 Billion.  Sounds like a lot, until it is compared to government spending.

Every ounce of the gold in Fort Knox would not cover government spending, in this fiscal year of 2015, for even two weeks.  Actually, it would pay for just over 13 days.  This is not a guess or even exaggeration.  Here are the numbers.

Your government, in the year of 2015, will spend  $578 Million every single hour, of every single day, for the entire year.

All of the known gold in the world, 4.9 Billion ounces has a market value today of $6.125 Trillion. That is just under 1/3 of this country’s National Debt.  That means, even if the world had three times the amount of gold it now has, and America owned it all, it still would not be enough to pay off our debt.

* A note here as to why we included QE in the annual deficit.  As is not known by too many people, QE (Quantitative Easing) is not the printing of money.  It is actually nothing more than creating debt, out of thin air.  The Federal Reserve sends a check to the Federal Government in the amount of a freshly printed Treasury Note, and miracles of miracles, the government now has that additional amount of cash to spend, and it does, and every penny of it is off the annual budget.

It does however add to the National Debt and if the entire world does not collapse, it will have to be paid back.

Between $90 Billion and $70 Billion has been created in that method every single month of every single year since Obama illegally assumed the office of the Presidency. Over 6 years.  When any Fed Chairman refuses to continue this debt creation, he is replaced.

Good news! They have started reducing QE and its down now to about $50 Billion a month.  This year they have only created about $600 Billion of new debt.  Gee, what a relief.

Just a bit more data to help one comprehend just how big our debt is.  Here it is. As of now the National Debt is $18.6 Trillion and growing by the minute.  But good news again,  if the idiots in our government woke up and realized that this spending must stop and they  then passed a bill outlawing any future debt creation, froze all interest payments on its existing debt and began paying it off in the amount of $1,000,000 each and every day, that $18.6 Trillion would melt away in just 50,000 short years.

What was that?  Did we hear someone say “All In”?  Well people, whether you say it or not, whether you want to or not, we are all, all in.  God help our children’s future.

Related Topics:candidatedebteconomyelectiongoldpoliticianssilverstore of value
Up Next