As a red-blooded American who loves my country, I second Giuliani’s assessment of Barack Hussein Obama.  We do not know Obama. We question his origins, his fraudulent Social Security number,  his forged-backdated Selective Service number, his hidden college records, his foreign beneficiaries as to money for Columbia and  Harvard, his mediocre grades that led to those top colleges accepting him, and his whereabouts during his formative years.  He spent millions of dollars to seal his high school records, his college records, his passport and more.  No one steps forth to talk about any high school or college classrooms he shared with them.

He’s a ghost on the American landscape, but he’s in charge of leading our country.

We know that he wrote a book, Audacity of Hope, where on page 261, he said,

I will stand with the Muslims should the political winds shift in an ugly direction. 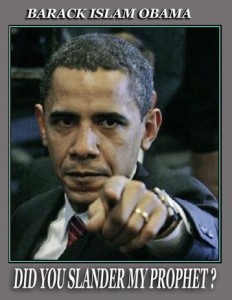 That single statement illustrates his deepest Islamic religious cognitive choices that violate every single aspect of the American Way of Life and our Constitution.  His Koran’s ultimate prime directive seeks to destroy free thought, freethinking, free choice of religion, free choice of governance and women’s rights.  In other words, according to his quoted words, he loves the holy call of the music of Islam over the Stars and Stripes,  our Pledge of Allegiance and our national anthem.

His father(s), whether it was Barack Hussein Obama, Sr. or (Frank Marshal Davis-Avowed Communist), whom he resembles without question or his stepfather, LoLo Soetoro, all devoted themselves to Islam, proving itself to be the most violent-barbaric religion on the planet.

Lolo Soetoro lawfully adopted and changed Obama’s name to Barry Soetoro as an official Indonesian citizen.  When Obama applied for scholarships to Columbia University, he used his Indonesian citizenship to gain scholarships.  That single fact alone makes Obama ineligible to serve as an American president.

Nobody knows the reality of Obama’s childhood because every single legal record remains locked up in sealed records.  At some point, history will uncover the mystery of Barack Obama.  It won’t be pretty.

In the meantime, in six years, he subverted the American worker by not enforcing our immigration laws at the border or internally by arresting employees of illegal aliens.  He knowingly assisted and continues to assist illegal aliens jumping our borders and already working within our country in violation of our laws.

He broke our U.S. Constitution numerous times ending lately in overstepping his Constitutional authority by granting a counterfeit amnesty for 20 million illegal aliens.

He continually lied to the American public via the Benghazi cover-up where he personally failed to act, which led to four Americans being killed by Muslims.  Ironically, Obama hired eight Muslims in his immediate circle to help him with Islamic prime directives to dismantle America’s dominate religious base: Christianity.  Obama remains intent on turning our country into an Islamic refugee holding pen—that sooner or later will erupt in major violence, much like in Europe.

In fact, Obama scoffs at Christians when he defends Muslims for their barbaric violence, which manifested in Paris, France in January and this month of a Jordanian pilot being burned to death in a cage with cameras rolling.

And yet, Barack Hussein Obama chastises our country in favor of the violence of Islam:

Fact: Europeans fought the Muslims in the Crusades.  Fact: Muslim women remain slaves in their own countries with no rights.

He covered-up, along with his U.S. Attorney General Eric Holder, the “Fast and Furious” gun trafficking at our borders that killed more of our border patrol officers.  The cover-up continues as of this date.

While in office, he understood that African-Americans suffer job losses and depressed wages at the hands of endless legal and illegal immigration—yet does nothing to solve the problem.  A mind numbing 1 in 4 Black American males cannot secure a job.  A stunning 73 percent of African-American “out of wedlock” children face life with a single mother living on welfare, which equates to complete disintegration of Black American families.  Instead of taking action favoring our suffering African-American millions living in poverty, Obama plays more golf and takes more vacations than any other president.  He follows the Black Caucus in Congress that plays a similar game of doing nothing for Black constituents across America.

While in office, Obama watched food stamp recipients jump from 36 million in 2008 to 48 million in February, 2015.  In other words, he hasn’t and won’t do anything to bring jobs to those Americans, but he will engage illegal acts against our Constitution in favor of 20 million illegal aliens and their employers.

Obama never served in our U.S. military.  He doesn’t know a platoon from a company.  He never worked a job in his life, thus doesn’t know what American workers must endure.

Whatever Obama loves, it’s not America or Americans.  His words, his “Islamic gang sign” that he features prominently in his trips around the world shows that he loathes America and Americans.   I for one, as a red-blooded American, would like to see Barack Hussein Obama brought up on charges of failure to defend our country, our way of life and our citizens.  I would like to see him tried, convicted and impeached.